And the Mercy Seat is Glowing, and I Think My Head is Melting

It's rather amazing how quickly A Serbian Film has left my brain. That's not to imply I've forgotten it; I watched it just a couple of hours ago. But already, I don't care anymore. The shock impact director Srđan Spasojević has no doubt banked on -- and banked on effectively, as far it goes, given the movie's far fringe infamy -- to carry A Serbian Film through as some sort of career-starter, has been awfully quick to drain away.

I can think of a few different reasons for this, but right at the top of the list is that once you know what's in the film, you know what the film is. It's become something of what I guess you'd call a meme to say you've read A Serbian Film's quite thorough Wikipedia plot synopsis, and then announce that under no circumstances will you ever actually watch the film. I said this myself not terribly long ago, and figured the film's sketchy availability, at least in my neck of the woods, where getting my hands on it would, I thought, have involved something to do with home delivery, would make it a pretty easy promise to keep. So but then I was in the local video store today where I buy almost all of my DVDs, and I was absent-mindedly scanning the horror section -- which I do in the same way people in the supermarket linger in the bread aisle before deciding they already have plenty of bread -- and there it was. Just sitting there, with a big "UNCUT" sticker right on the front. For $8. I ended up buying it out of disbelief more than anything else.

So I bought it, and I watched it, and I decided that Wikipedia had summed it up rather nicely. There's nothing in that synopsis that isn't in the film (mostly, anyway; my copy is actually shaved down by one minute from the edit of A Serbian Film that blew up film festivals a few years ago, but I promise you the gist was clear), and there is nothing in the film that expands on the synopsis, this latter point being the key. The shock effects that A Serbian Film so feverishly pleads for are in the idea of the shocks rather than the shocks themselves. This is maybe easy enough for me to say when I've possibly been robbed of up to a full minute of child and infant torture, but when I think -- and I have no choice but to do so -- of the description of the film's most notorious scene, the one that enabled Spasojević to coin the term "newborn porn," a phrase that has gone on to do his marketing for him, and then think of what I saw on the DVD, I'm left to wonder what might have been removed that would still make the DVD legal for me to own, which I assume it is. Not much, I should think. 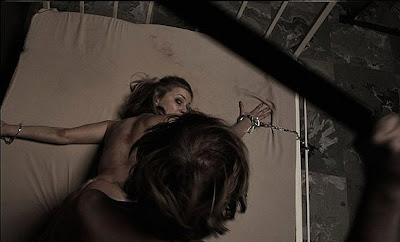 And either way, so what? Would a half second more of trauma have rendered A Serbian Film meaningful in some way? Because by the way, it's not a film that means anything. The narrative, such as it is, hinges entirely on extreme excess, and can be summarized quickly: Milos(Srđan Todorović) , a legendary ex-porn star who is now married and has a son, is approached by one of his former costars (Katarina Žutić) with an offer to appear in a bit of art porn being put together by the mysterious Vukmir Vukmir (Humbert Humbert? If so, Spasojević, then how dare you?). Vukmir is willing to pay through the nose for Milos's services, the only sketchy part, from Milos's point of view, being that he will not have any idea from one day to the next what the filming will involve. Vukmir wants Milos's reactions to the sexual situations to be pure. And are they ever!

At this point, cue the shock. Vukmir is once referred to by Milos's wife as sounding like he's one of their countrymen on trial at the Hague. This line is the equivalent ofThe Last House on the Left ending with somebody saying "Plus, Vietnam," which Wes Craven has sort of been doing ever since, or Eli Roth closing out Hostel Part II with a card that said "Hey, guys? Iraq." Which, okay, ibid. In other words, it's phony horseshit. Because I don't think it's any kind of accident that Spasojević has not followed up A Serbian Film with a scathing political indictment of modern day Serbia, but rather a section of the upcoming horror anthology The ABCs of Death. Not that I have anything against horror -- I quite like it, most times. I think what I'm saying is that horror directors are assholes. I don't know, that can't be it. 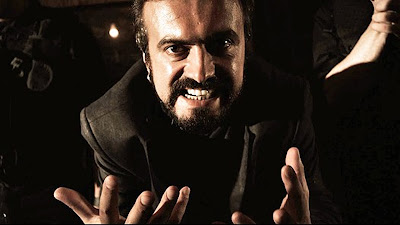 If believing, or "believing", as far as we reasonably could, what we're shown in A Serbian Film didn't matter, then, obviously, it wouldn't matter, and this would also be a completely different kind of movie. Maybe closer in spirit, if in no other way, to Andrzej Zuwalski's Possession, another notoriously disturbing horror film, but far, far less graphic (but still pretty graphic), that I saw recently, one I didn't "believe" (let's go with that one) for a second -- it's a film that revels in its artifice -- but which gave me far greater pause in terms of my own personal uneasiness than A Serbian Film could ever have managed. Probably because Possession's effects are in some ways undefinable, and A Serbian Film has all the force of a synopsis.
Posted by bill r. at 4:51 PM

Generally, when The Powers That Be determine that we, their lowly subjects, shouldn't be allowed to watch something, I put that something at the top of my "Must See ASAP" list. For some reason, though, no matter how hard I try, I just haven't been able to give a damn about seeing this movie. And this review now ensures my everlasting indifference on the matter.

That's not to say I agree with its banning, or the enforced edits. Just that, as an adult and citizen of the Free World, I should be able to choose not to see A Serbian Film for myself, thank you very much.

Yes, but it wasn't banned in the US, obviously. A lot of outlets don't want to touch it, which is their prerogative, but others have chocsen to touch it, and it's therefore available.

As for the edits, I don't know the history of them, meaning I don't know who made the decisions, but it does seem like the edit I have on DVD is the only edit available on video anywhere in, at least, the English-speaking world. So it's hard to know which Powers That Be we're talking about here.