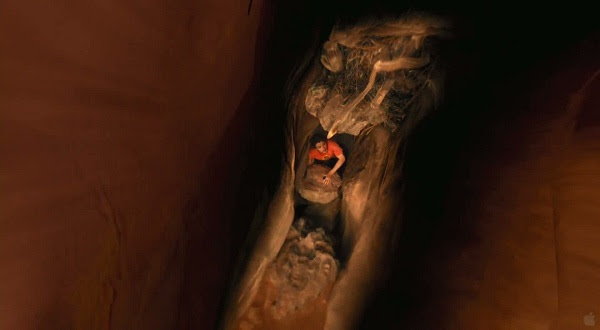 127 Hours (d. Danny Boyle) – One of the reasons I was interested in seeing Boyle’s film (which stars James Franco as real-life outdoorsy-type Aron Ralston, who became famous some years ago when a canyon climbing accident left his arm seemingly hopelessly pinned under a large rock, from which hard place he escaped by cutting off his own arm) is that it is 93 minutes long. “Oh,” thought I to myself. “What a relief. I should reward this restraint by watching the film projected onto a screen.” So something like a year and a half later, I caught the movie on HBO, and I can now state with confidence that 127 Hours is perfectly okay, if you don’t mind Danny Boyle or James Franco too much.

As it happens, I do not mind them too much, so I found the film to be a relatively painless experience. But Boyle has an ingrained jitteriness that I always have to get past in order to enjoy any of his movies. Sometimes I’m successful, but I still always have to do it. In the case of 127 Hours, I got the sense that the jitteriness was being deployed in order to achieve some kind of Koyanisqaatsi-esque global connection to Aron’s plight. This he fails to achieve, and doesn’t need to be messing around with that stuff anyway, because it’s not hard to imagine oneself partially crushed by a rock and unable to extract yourself, and think “What would I do?” Further – and this is a script thing, which Boyle wrote with Simon Beaufoy – Franco’s epiphany that he was sort of a selfish dick before a rock fell on him rings terribly hollow, probably because the conceit of 127 Hours is that Franco records everything he thinks or feels onto his little camera dealy that he brought along. Which in terms of depicting the way people live their lives these days is certainly fair enough, but on the level of using the medium of film to convey character and emotion, is kind of a bit of a rip.

Franco is fine, by the way. He’s right at home with Boyle’s aesthetic, which is maybe not the biggest compliment you can pay to an actor, but at least they mesh. Franco does not deliver the tour de force some have claimed – my goodness he acted all alone for a lot of the time! – because Boyle makes it very easy for him, in ways already covered. Franco’s, and the film’s, single best moment comes when that arm finally pulls free from the rest of his body. Boyle drops the sound and deflates the tension into anti-climax as Franco stumbles backwards, free, and totally baffled. The plan worked, but still somehow makes no sense. 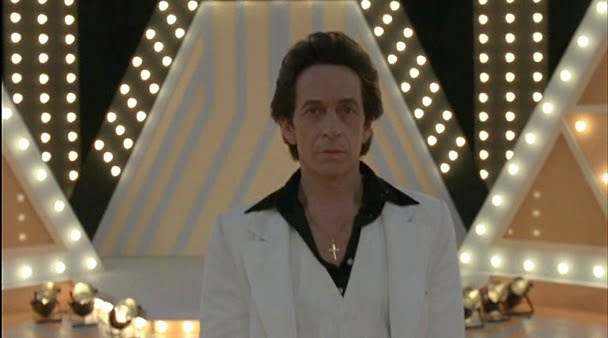 Tony Manero (d. Pablo Larrain) - This Chilean film from 2008 comes with a lot of notoriety -- infamy, you might say -- due to the graphic nature of its story about a middle aged man named Raul (Alfredo Castro) who, in 1978, during the Pinchoet regime, has become obsessed with the film Saturday Night Fever, as well as brutally convinced that he himself is a South American version of John Travolta's character. The graphic stuff is supposed to be the violence, because Raul is, if not technically a serial killer, still a remorseless and casual one, but what I ultimately found most interesting about Tony Manero is how the film treats Raul's violence with the same air of insignificant digression -- note, please, that I did not say transgression -- as Raul does himself.

This isn't to say there's no savagery or satisfaction to Raul's killings, just that there might not be. He's pretty stone-faced when he goes about it, after all, and they're all a means to an end anyway. That end being the purchase of glass floor, similar to the one at the disco in Saturday Night Fever, for the stage at the beat-up little night club where he works and performs, and for which he is planning a big Tony Manero-esque dance-off (Raul also hopes to win the upcoming Tony Manero look-a-like contest for a local TV variety show). Then, too, there is the fact that the brutal-murder-with-a-tired-sigh vibe of the whole ties in with a central idea, which is that Raul can bash in the heads of whoever he wants, and with Pinochet in charge no one will notice anything amiss.

This is a good idea, or a good joke, if you prefer, but not necessarily something you'd be advised to build a whole movie on. Larrain doesn't, thankfully, and in the end Tony Manero (which, by the way, I did not find to be egregiously violent in any way, and therefore I'm baffled by its reputation; still, though, don't take the kids) is a grim little snapshot, or maybe a portrait of a week in the life of the second worst person in Chile. 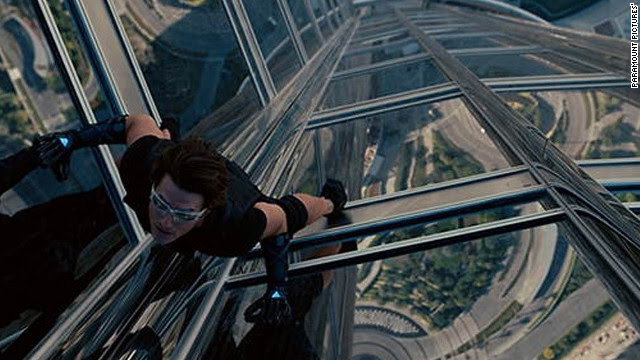 Mission: Impossible - Ghost Protocol (d. Brad Bird) - I wondered out loud recently how common is it for the third and fourth movies in a franchise to be the best ones. Almost never, was the aggregate answer, but the Mission: Impossible films have achieved the, at least, highly unlikely, because part three, directed by J. J. Abrams, was a lean and fun little action movie, buoyed by the inspired casting of Philip Seymour Hoffman in the Bond villain role, that trumped franchise predecessors Brian Freakin' DePalma and Goddamn John Woo For Christ's Sake, and now Brad Bird, known before strictly for his animated films for Pixar, like The Incredibles, and elsewhere, like The Iron Giant, bests even Abrams. Mission: Impossible - Ghost Protocol is simply fantastic. It really never lets up, almost at all, save for a brief period of regrouping following Bird's magnificent Dubai set-piece, but otherwise the film, which finds Tom Cruise's Ethan Hunt and the rest of what's left of IMF trying to pull together what little they have after being, by necessity, cut loose by the US government, is aggressive in its desire to keep the adrenaline flowing. The group, made up of Cruise, Paula Patton, Jeremy Renner, and Simon Pegg, not only have to stop the rogue Russian "nuclear extremist" that is their enemy, but they have to do it in secret, because they've been smeared as villains in the cutting-loose process.

So that's the set up, and the movie just sings. I've heard complaints that the villain, Hendricks, is not much of a presence, which is sort of true, I guess, but two things keep me from agreeing totally. For one, the film's showdown between Hunt and Hendricks (Michael Nyqvist) in a Mumbai parking garage reveals, in small doses, the character's dangerous mania pretty nicely (too little too late, perhaps, but I thought it worked). And for another thing, outside of the film's wonderful action filmmaking, which is as precise and clear and ambitious and thrilling as you could want, the film's chief pleasure for me was the group of heroes. Up to now, the Mission: Impossible series has taken some well-earned lumps for being The Tom Cruise Program, starring Tom Cruise, while the show on which they've been based was more about the team. Brad Bird, for the first time, gets that, and while Cruise is the unquestionable leader, nobody, not Patton or Pegg or Renner, is left behind. It's a good team, and the actors have great chemistry together. This is the kind of film that should have kicked off the whole franchise. I'd hate to think of them pulling the plug just when it all started working finally.

There are a few things I can say in favor of Boyle and this movie:

1.) He didn't opt for the obvious gimmick-cum-selling-point of making the movie exactly 127 minutes long, at least.

Actually, there's just that one thing. But, still, it's something.

Manero I did like, one of those movies where you're never sure what's gonna happen in the next few minutes. I actually thought, towards the end, when things start going south in a big way, that the guy might actually redeem himself a little--that he might resort to violence to help his friends out for a change, instead of just to satisfy himself. Because, y'know, that's how this kind of thing is always supposed to play out in the movies, ain't it?

Well...I don't think there was actually anything in TONY MANERO that would indicate that Raul would ever do anything to help anyone but himself. To reverse that would have seemed ridiculous to me. And this sort of thing may play out like that in movies on a regular basis, but in reality, too, remorseless killers of innocent old people don't tend to be especially selfless.

I dunno about that, but yeah, I was pleasantly surprised by the way the movie set up this opportunity for some kind of phony movie-standard last-minute heroics from this character, and then dismisses the whole possibility with something like contempt.

I haven't seen either but 93 minutes still seems about 92 minutes too long to watch James Franco by himself. Any James Franco uninterrupted screen time longer than, say, two minutes and I start nodding off.

I just watched 127 hours a few weeks ago on DVD. Did end up hitting the fast forward button a few times, but the ending, where he finally staggered out of that canyon, absolutely wowed me - the music, the way he shot it, Franco himself, I watched it about 5 times. So a limited success for me.

Liked Mission Impossible, but it had no staying power, pretty much forgot it after leaving the theater.

Then I fear you would not last long, Greg. From what you're telling me, I'd say you'd crap out at about the 2 minute and 1 second mark.

Patrick, that was the best part of the film, easily, although I thought it was marred by the rising from the pool bit. Just show him safe and you've made your point.