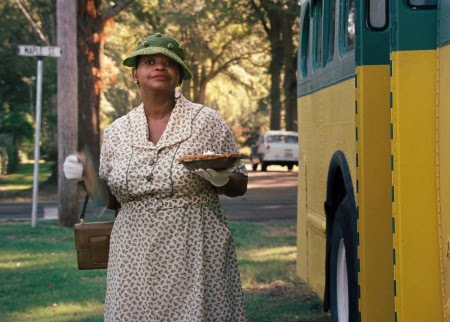 Over the weekend, I watched The Help, with the intention of writing about it and one or two other Oscar movies, but since the impulse to do so could be summed up by the phrase "It's something to do," the urge quickly faded. This was not helped along by the fact that The Help exasperated me to the degree that I found it easy to focus on other matters, and that the only other film I watched for this scuttled post, Midnight in Paris drew from my mind no thoughts beyond "That was a pretty good movie."

Still, one thing about The Help must be noted. A lot of people have talked about the hideous "chocolate pie" scene from this movie, some even noting the absurdity that a film as pleased with itself as this one should hinge almost entirely on one woman serving another woman an evidently delicious pie made out of human crap. But as this is depicted as an act of well-deserved revenge, it is not thought about in terms other than "This is stupid" (it is) or "This is funny and makes total sense!" (it isn't and doesn't). Now, I'm not about to argue the morality of it, because the pie-eater, played by Bryce Dallas Howard, is an inhuman monster. Her reaction to the pie, however, reminds me of something Martin Amis once said about porn, which, to paraphrase, is that if you find yourself indiscriminately browsing pornographic images and encounter one whose theme involves coprophagic pig farmers, you better hope you don't find out you like it. The mania of Howard's character from that scene onward could be chalked up to her wrestling with the knowledge that she genuinely likes the taste of what she didn't realize she was eating. Because of course she couldn't not know that wasn't just chocolate, right? That's impossible!

But besides that, the thing I really can't shake is the part the filmmakers so scrupulously avoid showing, and that is the preparation. The baking of the pie. Because the baker, played by Octavia Spencer, had to do all this. In other words, she had to gather her ingredients. And...and mix them. In a pan, in her kitchen. And then put it in her oven, in her kitchen. And once you consider this, you sort of have to think, deserved revenge or not, that this is basically the kind of thing that serial killers do. So I'm left wondering, okay, does she also have a mason jar full of human thumbs stashed somewhere? In the film, she claims to regret her actions, and describes them as horrible, but I'm sorry, there would have to be way too much prep time involved in this whole process for me to buy that. If she thought it was that horrible, she would have stopped as her hand started reaching into the toilet, and said to herself "You know what? No."

It comes from the book, but is described with such subtle language that I had to ask someone who also read The Help if Minny did indeed put poop into the pie. The movie, however, has no such qualms and milks that poop pie shamelessly. That the other film up for honors with a large female cast, The Bridesmaids, also derives much of its humor from a group outbreak of diarrhea doesn't make this female movie lover especially happy. George and Brad managed to avoid bathroom humor in their nominated films. But for women it has come to this.

In fairness, the comedy tradition from which THE BRIDESMAIDS springs is replete with poop jokes. And I would also argue that THE BRIDESMAIDS doesn't derive much of its humor from that one scene. The funniest scene in the film is the one on the airplane.

I just wanted to point out that there is a movie nominated for an Oscar that "milks that poop pie shamelessly".

Joe, it's basically the plot, or what the plot hinges on. It's the mystery element. It's mysterious.

I think I just lost any interest I had in seeing this movie. Thanks for the warning.

I on the other hand am now dying to see this, to see if it can possibly be as terrible in reality as it is in my mind.

It's interesting because the shit pie idea reminds me of the similar comeuppance delivered to the similarly inhuman monster officers in Blackadder Goes Forth. The extenuating circumstances there were that was an absurdist satire whereas this is a purportedly serious movie.

You know, I briefly dwelt on the same thought. In high school I had a teacher who hated me for ridiculous reasons, and I was extra super upset at the unfairness of it all, mainly because I was 14. When I was tasked with making her baked goods for Teacher Appreciation Day, I threatened to make cookies with ExLax instead of chocolate. But I felt like an idiot who was taking things too far almost immediately, so I never went through with it.

To actually bake feces into a pie... yeah, you're gonna have a lot of time to think on that while you're stirring, while it's baking, while it's cooling, as you sit with it on the bus...

Rod, I don't actually remember that BLACK ADDER episode. That does sound like something that would happen on that show, however. And the pie-eating scene is as bad as you imagine.

Stacia, ExLax is a tried and true method of revenge, or so I would guess. You shouldn't feel bad for entertaining such thoughts! Stupid teacher!

And yes, I would think someone like Minnie, in real life, even she got so far as to bake the pie, would find herself on the bus, on the way to her enemy's home, and think "I've changed my mind."