Beyond the Earth and Sky: Dennis, Me, and The Man Who Wasn't There - Part Three (Part One)

Welcome back. Here's my response to Dennis, and part three, or four, depending on how you're counting, of our conversation about The Man Who Wasn't There. Click here, here, and here for the rest. Dennis's response will go up tomorrow both at his blog, and here. You may leave comments at either site, or both. 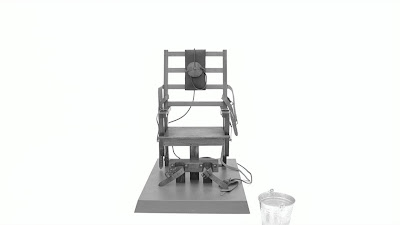 BILL: Dennis, I love your comparison to Melancholia. The power of that film's ending, as you say, comes from the realization that, from Justine's point of view, her state of mind, for once in her life, might be regarded as beneficial. For her, as the Earth is about to be obliterated, there is no horror, because whatever is to come after, even if it's nothing, can't be worse than what she's feeling now. Similarly, Ed Crane in The Man Who Wasn't There faces execution with hope, because look at what Earth has to offer. I realize I'm just parroting what you said in your last post, but what an amazing ending! I'm reminded of how Val Lewton summarized the message of The Seventh Victim: "Death is good." For some, and in a certain state of mind, maybe. Melancholia doesn't leave the viewer with any hope though, even the very grim kind that The Man Who Wasn't There does. If the endings of both films could be explained with one word each, for Melancholia it would be "Finally," and for The Man Who Wasn't There it would be "Maybe." And do you know, it wasn't until watching it again for this series that I noticed that as Ed shaved Doris's legs early in the film, so does Ed have his leg shaved in preparation for the Infinite. He even offers the slightest of ironic smiles, or glances, at the razor scraping away at his leg. Given his narration at the end, does he believe Doris is there with him? Ed seems willing to believe just about anything that will provide hope, so, you know...maybe.

For instance, he'll believe that Birdy is a great pianist. This was the section of the film that baffled me, on some level, the most, and for the longest time. Now I can no longer see where I was confused. Birdy -- who I think it's safe to say Ed is sexually attracted to, but that this is almost beside the point -- is simply Ed's last hope for life on Earth. There's an interesting parallel going on in this story with Birdy, and the one with Freddy Riedenschneider. Ed loses out in both, and I'd say that categorizing, as you do, Freddy's cynicism as sociopathological is so accurate as to perhaps be a little kind. He's not even that smart, as a matter of fact. He describes the Uncertainty Principle as the act of changing something through the act of observation, yet what he's applying this to is the revelation that Big Dave was no war hero, as he'd always claimed, but an Army clerk who sat out the war at a desk in San Diego. Big Dave, the thing being observed, was not changed by the observation. Big Dave was always that. His grasp on Heisenberg is about as firm as Larry Gopnik's is on Schrödinger ("I'm not even sure I understand the cat"). 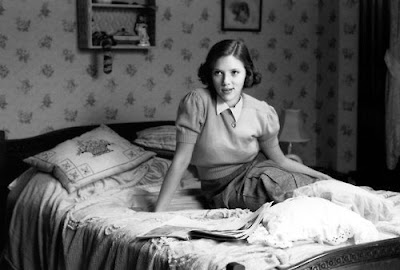 But anyway, Birdy. I think you have to understand Birdy -- not the girl, but the idea -- before you can understand Ed, or the film. Hearing Birdy -- Beethoven, really, but Ed is unable to make this distinction -- play the piano at the party at Nirdlinger's gave Ed a shot of pure beauty, and okay, Scarlett Johansson playing Birdy is part of that. The point being, for poor Ed, it was a brief moment of the kind of transcendence he spends most of the film searching for. And later, when Big Dave is gone, and Doris is gone, and everything seems to be over, that's when the emptiness really sets in, the absence. That's when Ed becomes the man who wasn't there. (When the film came out, I remember some critics claiming the title eluded to the notion that Ed was a guy who was such an empty vessel that he just got swept up in the film's action. This is clearly a stupid thing to think, and like an idiot, I used to hold that misinterpretation against the film, because if that's what the title was meant to mean, then obviously they'd screwed up.) That's when the film fades out on the narration "I'm the barber." But he seeks out Birdy, because he thinks he beauty, musically as well as physically, or what he perceives as her great talent, is all that's left. Life is monstrous, but if someone like Birdy can play music like that, maybe there's something else. Maybe the peace he felt in the church actually had a traceable source. What does he get? He's told Birdy would make an excellent typist. And also that Birdy never really cared about music anyway. If I was Ed, I might greet the electric chair with open arms myself.

"Because The Man Who Wasn't There fails if it turns out to be simply a hipster’s pose, all film noir sheen and no substance. I think the fact that, as I suggested in my last post, the movie has its own texture and rhythms apart from those of the movies in which its rooted, that it is not simply an exercise in 'spot the references,' indicates that Riedenschneider’s uncertainty does not apply here."

I think you've pretty cleanly nailed why the Coens are so extraordinary, and how they challenge their audiences to keep up. At a glance, The Man Who Wasn't There is begging to be simply, and emptily, and tediously, taken as what you say it very clearly is not, a jumble of smart-ass cues from other films. The Coens have been accused of treating their films as this kind of playground for most of their careers, after all. But you've been right all along to point out that this film is "its own beast," just as you've been right to insist on the connection to A Serious Man. Because no, Riedenschneider's uncertainty does not apply here, because he doesn't mean a word of it. He doesn't care. Larry Gopnik's uncertainty, however, which is another thing entirely, applies throughout The Man Who Wasn't There. Larry may be much more verbal and manic and emotional (though he tries to tamp that down) than Ed, but goddamnit, after talking to you, Dennis, I'm about ready to regard these two films as twins.

So, okay, if this our last day, maybe some housekeeping? On the "liking characters" front, I mildly object to your examples, because I do like Holden Caulfield, at least by the end of that novel, and I do not like Walter Neff. Who could? The point is, that doesn't matter. This is actually a pretty big topic, as far as I'm concerned, and I'm not fully prepared to get into it all right now. Suffice it to say, sympathy, and empathy, should go to those who deserve it. Ed, I think, does. Neff doesn't.

Performances! I agree with you that they are, across the board, superb. I even think Johansson is very good, and I'm on record, somewhere or another, as not believing that she's grown into very much of an actress at all. More importantly, I think The Man Who Wasn't There may be the first time I really noticed Richard Jenkins. Not the first time I'd seen him, of course, because he's been around forever, but the first time I cared to find out his name. The way his head tilted back and his eyes closed for about a half second of sleep before his head rolled back around to Ed, and he said "Riedenschneider," is one of the finest bits of comic drunk acting I've ever seen. I've already praised Alan Fudge (who I've learned passed away last year) as Diedrickson from the ME's office, but I really do love the quiet yet subtly panicky discomfort he portrays in the few moments he has left after Ed's admission about his sex life.

For the main cast, I could go on and on. Thornton gave a brilliant performance simply by looking the way he does. He provides a clinic on minimalism throughout, which is somehow not crushed by the bigness of everyone else, from Frances McDormand's obnoxious, finally pitiable sot, to James Gandolfini's insecure bull-in-a-china-shop, to Michael Badalucco's Frank, who I think the Coens wrote with the express purpose of giving themselves a vehicle for their brand of literate, everyman speech ("What's the problem, friend? This is a business establishment, with posted hours." I like that Frank was prepared to begin an argument like that). I used to think Badalucco was one of the liabilities. I feel an intense need to be upfront about all my past foolishness. 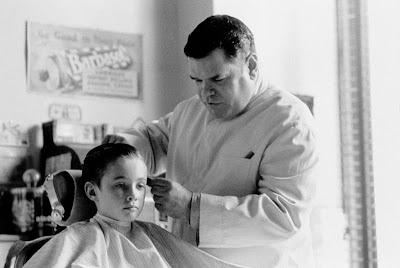 And Shalhoub. I guess Shalhoub's Riedenschneider also provides a vehicle for the Coens' writing, but of course Riedenschneider is no everyman. Apart from everything else about the performance and the character, I was just thrilled to see Shalhoub back. He's acted in maybe a grand total of six or seven scenes for the Coen brothers, but somehow his Ben Geisler in Barton Fink established him, already, as a Coens regular, along with Turturro and Goodman and Holly Hunter and McDormand. It took, what, almost ten years for him to appear again, and it's been another ten-plus and no sign. But I love Shalhoub, and I love Shalhoub teaming up with the Coens. Why this happens so rarely is beyond me.

Finally, you ask what Coens film ranks lowest for me. Well, I'm afraid my answer is pretty boring, because it's either, depending on the day, Intolerable Cruelty or The Ladykillers. And mind you, I still like both. I think they're funny, and there's some very fine work in each, both in the performances and cinematically (I think what Deakins does in The Ladykillers is especially undervalued). But neither film feels like them. I don't know how The Ladykillers came about, but Intolerable Cruelty was a pre-existing script they agreed to rewrite and direct, and both films feel like something they had to put themselves into. Everything else they've made, including their two novel adaptations, have been very clearly part of them already. No Country for Old Men and True Grit could almost have been predicted as Coen films, long before either was made. But Intolerable Cruelty and The Ladykillers seemed like coasting. As a fan, I admit I was worried for a while there. The fact that they've come roaring back with four great films in a row has sort of eased my worried brow on that count, however. 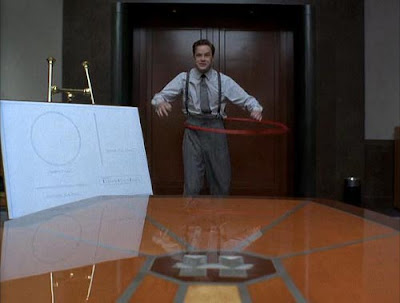 Now, take those two out of the equation, and rank only the pure Coens stuff, then I guess I'd have to say The Hudsucker Proxy, a film I still like a lot. I just think sometimes their instincts for the cartoonish are off, and the movie sometimes, in the early going, feels a little shrill. Also, here and there, there's a joke that I think is beneath them (the "crane kick" stance from Norville's dream sequence, for example). But there's a lot to love. In my case, the worst Coens film is the one I merely enjoy.