Monster of the Century 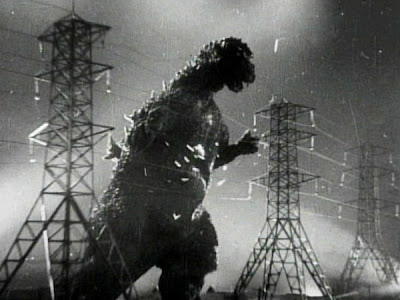 Prior to yesterday, it had been a long time since I'd seen a Godzilla movie, and, prior to yesterday, I had never seen the original, unaltered Japanese cut of Ishiro Honda's 1954 original. That film, set to be released by Criterion tomorrow, is, according to David Kalat in his detailed, wide-ranging, and mildly defensive commentary track, really marks the beginning of the monster movie as we think of it today, at least in terms of giant monsters destroying lots of things, there not really being much of a tradition before that. Godzilla's real progenitor, Kalat explains, is King Kong, a film which is a full twenty-two years older than Godzilla. Subsequent giant monster movies certainly existed, but were sporadic -- Godzilla is the one that unleashed everything. Another point Kalat makes is one that he never states outright, and may not even have thought to make at all, but the way he lays out the timeline in his commentary, it seems to me now very short-sighted -- even more than it already was -- to blame films like Jaws and Star Wars for the death of 1970s Hollywood inependence. If it's important for you to blame anything, it should be the 1952 re-release of King Kong. Thirty years of what Kalat calls "unsatisfied nostalgia" was paid off with that hugely successful re-release, and the inspiration that led to Godzilla then of course also led to the wave of big science-fiction and fantasy films through the 1950s and 60s, films which were gobbled up by your Spielbergs and your Lucases, which led to you-know-what. 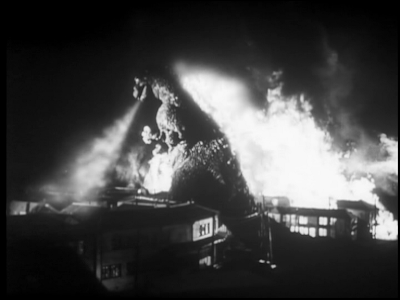 Godzilla is of course interesting for lots of different reasons. And it's a good movie, to boot, which is basically the gist of Kalat's commentary. His defensiveness -- which he claims at the outset he plans to avoid, but it can't help creeping in, and whos says it shouldn't? -- stems from his desire to make the case for Godzilla, which shouldn't have to be done, at least if you've seen the original cut. Kalat excitedly points out the discrepency of the New York Times claiming in their review of the film that not one of the actors is any good at all, two years after dubbing Kurosawa regular Takashi Shimura, who plays Dr. Yamane in Godzilla, the greatest actor in the world for his work in Kurasawa's Ikiru. But it's annoying that anyone should have to dig up that kind of hypocrisy to defend Ishiro Honda's film. Godzilla's bona fides as a profound nuclear age allegory are undisputed at this point, and the Bosley Crowther's of the world did not have fifty-plus years of increasingly goofy and vapid Godzilla films to dilute the idea (though they did have forty minutes of Honda's film replaced with forty minutes of Raymond Burr adjusting his belt, so we must temper our outrage a little).

Suffice it to say, Godzilla holds up. The monster effects are occasionally dusty, but mostly still strong, even knowing it's one of two dudes in a rubber suit. If nothing else, Godzilla's roar remains terrifyingly weird. The opening credits of Honda's film begins with about thirty seconds of just that strange, malicious, train-engine honk repeating itself before Fumio Hayasaka's propulsive, near-martial score kicks in. It's a while into the film before that sound will mean anything to the audience, and it's quite informative to note how Honda keeps his monster off-screen, but present. Note the early attack on the village, during the typhoon, with the rain and darkness, and think, too, of Spielberg's tyrannosaurus rex reveal in the first Jurassic Park. 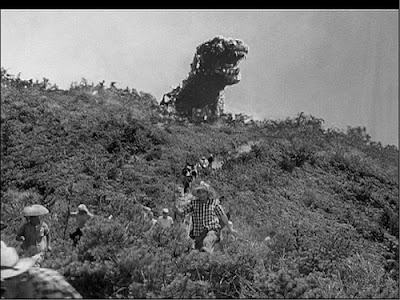 The story, as is usually the case in monster movies, is simplicity itself. A fishing boat from a seaside village is lost to some strange event, as are rescue boats sent after it. Giant footprints and radioactive readings, as well as old village legends, eventually lead Dr. Yamane to suspect a prehistoric creature is to blame, which is in fact the case. Godzilla will make his presence known, but just a little bit at first. Later nuclear monster films had a tendency to hold back on their reveal for a while, before putting the creature out there all at once, but Godzilla is first seen over the crest of a massive hill, first just the distinctive leaf-shaped spines on his back, and then his head. Eventually Godzilla is front and center, smashing Tokyo in a manner that would eventually become the stuff of parody, both within and without the Godzilla films. But boy, it sure takes on another aspect in the first go ‘round. There’s real terror, and real destruction, in these images, and in the set-up of victims who chat – with surprising casualness – about how they survived Hiroshima, and now they have this to contend with. 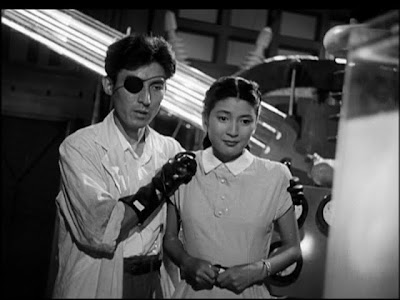 Obviously, Honda is not interested in keeping his themes hidden. The idea that Godzilla was awakened, and angered, by H-bomb tests, and the relation these weapons have to an invention Dr. Serizawa (Akihiko Hirata), the film's stealth hero that will eventually lead to the monster's destruction is right there, out in the open. Serizawa is an interesting figure in the film, as he’s introduced as the third corner of a love triangle filled out by Dr. Yamane’s daughter (Momoko Kochi) and her scientist fiancé (Akira Takarada). Serizawa’s “Oxygen Destroyer” is clearly the film’s version of the next awful step after the H-bomb, and Serizawa’s despair comes not from any unrequited love – it’s pretty clear, once we meet him, that this is the last thing on his mind – but from the possibility of this invention being used for destructive, rather than helpful, reasons. What non-destructive uses something called an “Oxygen Destroyer” could be put to is anybody’s guess, but it’s eventually used to the one thing everyone wants to see destroyed. I can’t help but note at this point that Godzilla, like so many other films that address this broad issue – and I don’t just mean Japanese films – is conspicuously unwilling to deal with the role Japan played in bringing about Hiroshima (Nagasaki is, perhaps, another matter), and on that count Godzilla does rankle a bit. Then again, Godzilla was inspired, yes, by the atom bomb, but the H-bomb is something else, and the H-bomb testing that inspired the film post-dates the end of World War II by a good half decade.

It is difficult, though, to watch this film and not think of so many of the later Godzilla films in which Godzilla is portrayed as Japan's savior. The Japanese fought in World War II at the behest of an Emperor whose time had come and gone, who represented a dying way of life, and who brought out the absolute worst in his subjects. The atomic bomb seems to have violently thrust the country into the modern age, something they would come to embrace. Science fiction writer William Gibson has said that Japan "is the global imagination’s default setting for the future," which is pretty hard to argue with, and the changing role of Godzilla in their films, from symbol city-destroying nuclear power to (occasional) defender of the nation's well-being and liberty, may well reflect they would take the modern world that fell from the sky and formed it into their own image, occasionally to their dismay. 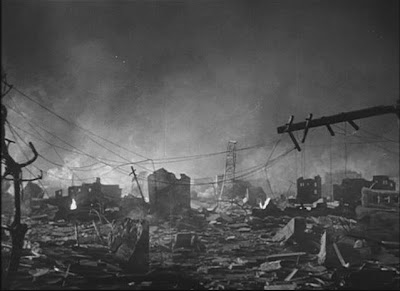 Great piece, Bill. I haven't seen this since I was a kid - and even then I don't think I saw the original Japanese cut, of course - but I love your analysis of the changing role of the monster in the subsequent Godzilla films and its obvious resonance, not only with Hiroshima/Nagasaki, but with the continued post-war nuclear arms race.

Thanks, Ed. It's strange to watch this film and imagine, years later, the Japanese characters depicted as basically praying for Godzilla to save them. In effect, nuclear power becomes their savior. Which is bizarre.

Anyway, now I have a hankering for a whole bunch of Godzilla movies.

Yeah, this made me want to revisit the original, at least.

It's also got me thinking about Joon-ho Bong's The Host. Did you ever see that one? It riffs on a lot of the themes of these old nuclear-paranoia monster movies, and it's really great.

I have seen that, and I liked it, but it has stayed with me. I keep meaning to buy it. I should get around to doing that. If nothing else, that's one of the best creature designs I've seen in years, and the effects are terrific.