Let My Soul Come to Maturity 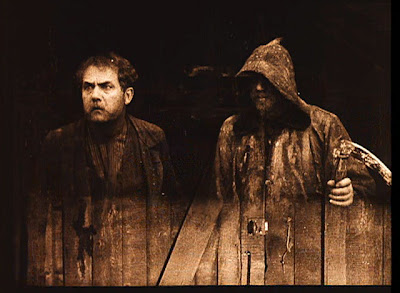 The Phantom Carriage, written and directed by, as well as starring, Victor Sjöström, is a ghost story, of sorts, about basic human awfulness. Sjöström plays David Holm, a man who we learn, as the film bounces backwards through time, and across the border of life and death, is a cruel, violent drunk who has destroyed his own life and the life of those who love him, and whose soul is so diseased that at one point he is seen gleefully coughing into the face of his sleeping children in a Satanic attempt -- although whether he succeeds in this plan doesn't seem to bother him much -- to pass on his tuberculosis. He's already managed this once before, though accidentally, when he infected Sister Edit (Astrid Holm), a saintly Salvation Army nurse who once was foolish enough to try to help David; when we meet Sister Edit at the very beginning of the film, she is on her deathbed. 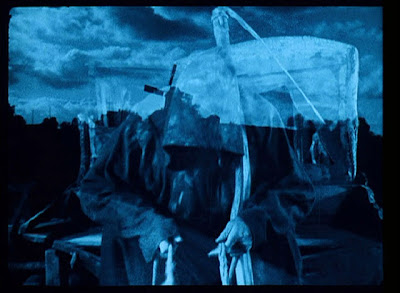 Based on a novel by Nobel laureate Selma Langerlöf, the premise of The Phantom Carriage is that whoever is the last to die on New Year's Eve is cursed to take on the role of Grim Reaper, and harvest souls for the next year. David Holm dies early in the film, shortly after relating this legend to a couple of his hobo pals, and finds his soul being reaped by an old friend, or anyway acquaintence, named Georges (Tore Svennberg), who was indeed the last person to die on the previous New Year's Eve. By way of prepping David for his new gig, Georges exposes him to the cold truth of his horrible, sinful past. In this way, The Phantom Carriage comes to resemble Dickens' A Christmas Carol in its approach to the ghost story as a moral parable. This does not preclude a sense of genuine eeriness, of course, of a bleak and shadowy feudal brand that at least a couple of generations of Swedish filmmakers seemed particular good at producing.

Death is a hunched figure here, not sinister or punishing, but weighed down by the sadness of the job. This fits, as The Phantom Carriage is a profoundly sad movie, and it's a testament to Sjöström's great, some might say bottomless, empathy that he is able to bring David Holm around. And me around on the character, though I can't speak for anyone else. Empathetic or not, Sjöström's is so merciless in his depiction of the man that Stanley Kubrick, it seems obvious, borrowed from Sjöström to help illustrate the complete ruination of Jack Torrance's soul. 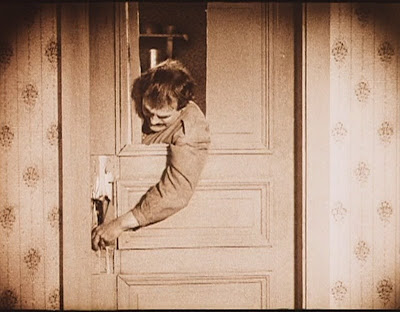 Yes, that would be David's wife on the other side of that door. And we're actually supposed to like this guy, sort of, kind of, eventually. So awful is David that his death, while technically a murder, or maybe manslaughter, could be said to have come about because his meanness and limitless selfishness finally amazes someone enough that they have to strike out. Finally, though, the film builds to a pitch of such despair (helped along, in the version I saw, by a truly magnificent score written in 1998 by Matti Bye; this score is, at times and among other things, some of the finest horror-themed music I've ever heard*), that any break in it is a blessed relief. Maybe that's Sjöström's secret in pulling off what he does, but he does it, and the overall impact of The Phantom Carriage is one of emotional assault followed by a particularly sober kind of peace.

I should say, though, that emotionally assaultive the film may be, it is gloriously so. The Phantom Carriage will be released on Tuesday by Criterion, and despite the fact that The Phantom Carriage's huge influence on Ingmar Bergman can be used as an explanation, if anyone like, say, Natasha Vargas-Cooper was stupid enough to need one, for the choice, it's one of those left-field releases that, like Pale Flower earlier this year, is really the company's bread and butter, and real gift to cinephiles. Speaking for myself, The Phantom Carriage is a wonderful slap upside the head and reminder that what I really need to be doing is watching more silent films. This constitutes the single greatest blind spot in my film-watching life, I have nevertheless been pretty thoroughly mesmerized by what I have seen so far, with this and Murnau's Sunrise, which I watched earlier this year, being the strongest dose of this cinematic world I've yet experienced. Humanity is rarely so strongly and nakedly presented on-screen as they are in these two films. *Bye's score is one of two provided by Criterion, the other, which I admit I have not checked out, by an experimental group named KTL.
Posted by bill r. at 11:17 PM

I'm with you on silents. They represent a huge blind spot for me as well. But I always get something out of the dramatic ones (not a big comedy fan, except for Keaton). I'm really enjoying what I've seen of PHANTOM CARRIAGE. If you like this and SUNRISE, I recommend you also check out Criterion's "3 Silent Classics by Josef von Sternberg." They are the most impressive I've yet seen.

Yes, that Von Sternberg set...I've heard they're amazing, and then I keep forgetting about them. When's the next B&N sale again...?