The depth and variety of the kinds of effect the presence of a movie star can have on a film are not only rarely explored; they're hardly ever considered. Hitchcock famously pushed this element pretty far, especially in Psycho, and it has been toyed with and kind of gingerly poked at from time to time since then, with Martin Scorsese going perhaps further than anyone since Hitchcock when, in The Departed, he painted the back of that elevator with Leonardo DiCaprio's brains (critics and film geeks who'd already seen that same incident play out in Andrew Lau and Alan Mak's Infernal Affairs, the film on which The Departed is based, and in that case with Tony Leung's brain, Leung being a huge star in Hong Kong, never really appreciated the impact DiCaprio's death had on audiences. I saw Scorsese's film in a suburban multiplex, and when that happened the air was sucked right out of the theater). But I believe a brand new use of the movie star has been invented by Steven Soderbergh in his new film Contagion, written by Scott Z. Burns. And it's not that he kills off Gwyneth Paltrow so quickly -- indeed, almost immediately. It's later, when the autopsy on her character is being performed, and Soderbergh gives us a close up of her dead face, tongue just visible between her lips, as the pathologists -- first you hear this, then you see it -- peel off her scalp and drape it over her forehead. 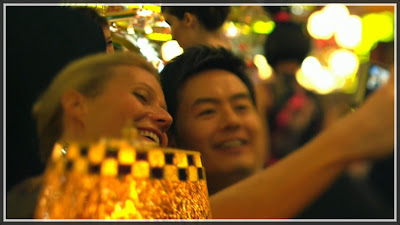 I guess that's the motion picture business for you. Or not. In any case, it helps Contagion along its path of despair, which course is begun very early. Ignoring things like marketing and so forth, the film is still called Contagion, and it begins with a sickly looking Paltrow coughing. You could wake up from a twenty year coma and be given this opening as the first thing you see and hear, and still know what's what. And once Paltrow is home in Minnesota -- she's been travelling in Hong Kong, and also using her long layover in Chicago to reignite an adulterous affair -- she hugs her kids and her husband (Matt Damon), and plus you see a couple guys in Hong Kong and one collapses on the bus, another is so sick that he deliriously wanders into traffic, then the sick girl in London, then the...and so on and so on. The virus at the center of Contagion has spread across the world before we're five minutes in. 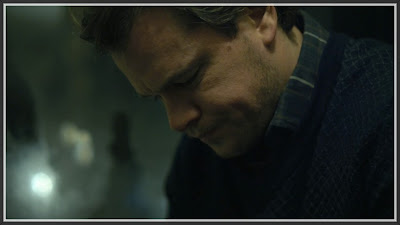 There is much that is interesting about how Soderbergh and Burns handle this material. I'm typically rather ambivalent towards this particular subgenre (of? Horror? Science fiction? Disaster film?) because, as I say in this post (coincidentally titled "Contagion"), too often the plan seems to be to create this horrific public health situation, then blame the people who in reality would be the ones trying to save your ass, and then get us to cheer on the assholes whose main goal would appear to be to break the quarantine and spread the virus as far and as wide as they can. Not so in Contagion, where, in an act of true artistic political subversion, the good guys are the CDC and the Office of Homeland Security (and even FEMA, though they're more mentioned in passing, but mentioned without contempt, which I feel is noteworthy) -- this film is pro the people most films like this are anti. The CDC is represented primarily by Laurence Fishburne, who is terrific, Kate Winslet, who has one of this rather chilly film's most heartbreaking scenes, and Jennifer Ehle, whose character arc reveals Soderbergh and Burns to be quite the pair of slyboots. 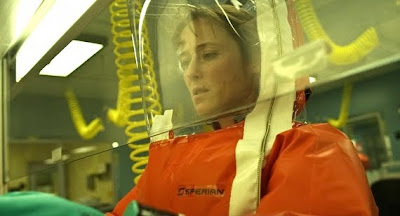 While they struggle to grow the virus and thereby create a vaccine, World Health Organization doctor Marion Cotillard works with officials in Hong Kong to trace the source of the virus; Homeland Security agent Enrico Colantoni (one of a score of excellent character actors in this very Zodiac-like cast) tries to contain and manage everything from a security standpoint, as well as watch this underground conspiracy blogger (Jude Law), who, as Johnny Casper said about Bernie Bernbaum, ethically is kinda shaky; and Matt Damon, having suffered through the death of his wife and stepson in the same day, and having learned that he is immune to the virus, simply tries to live and protect his daughter. 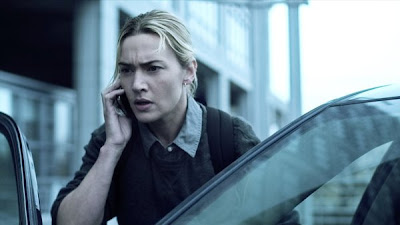 What's most interesting about Contagion, and what strikes me as its most Soderberghian aspect, is the way it plays out almost like a filmed timeline, of the kind you might see in a history textbook, marking all the important points of, say, the Civil War. This isn't simply because the film periodically pastes a "Day 14" or "Day 133" chyron on screen, any idiot can do that, but because each step towards, or attempt at, a vaccine is charted, and each decision made by a character which will have any kind of public impact is documented -- that's how it feels, not dramatized, but documented. Which I guess makes Contagion sound like a snooze, but in truth gives the film a sense of relentless propulsion. The fact that it sharply imagines certain details of what this world would come to be like, and how it would differ from how we currently exist, doesn't hurt, either. I don't want to give anything way, but there is a scene late in the film that involves a shopping mall that feels at once eerie and completely sensible and correct. 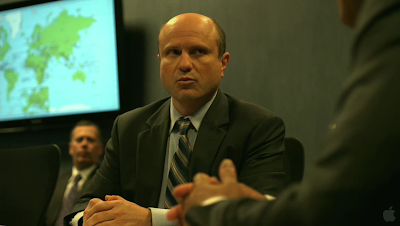 Not everything about the film succeeds. Jude Law's character seems to exist because even a film about a virus powerful enough to kill millions of people worldwide apparently must contain a human villain. I don't object to him being a blogger either, by the way, because who gives a fuck about those guys, but I do find it more than a little bit ludicrous that someone like him would wield the kind of power Soderbergh and Burns imbue him with. This would matter less if it wasn't eventually so important. I'm also not overly keen with the film's final minutes, in which the film makes a loop in order to, as far as I can see, frantically cram in the message they'd forgotten all about until just now. And no, it's not the message itself I object to. What I object to mainly is just before this occurs, there was the opportunity to end the film on a strong note of emotion, something which the film had, until then, been largely holding in reserve. Almost to a fault, even, but they paid it off. And then, wup, two more minutes. 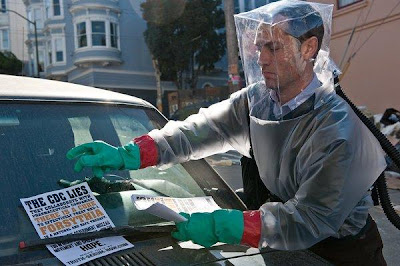 Ah well. You can't have everything, and it's undignified to ask for it. Even with these hiccups, Contagion is a very rare plague film, one whose scope is quietly global, its tone casually novelistic, and its vision absolutely goddamn terrifying.
Posted by bill r. at 9:07 PM

I'm sick to see this. The word of mouth is infectious and the trailer on YouTube has gone viral. I wish I was immune to this kind of thing but if anticipation is a disease, I don't want to be cured.

So go see it already! Jesus!

Eh...sorry to be commenting on this so many months later. Just saw this yesterday and loved it. Probably because I was also reminded of "Zodiac", which is just about the greatest thing ever.

However. I don't think the final two minutes tried to impose some sort of "message", but rather add some bitter and random irony. Which doesn't make anything that went on before a joke or meaningless, but rather adds some weight to it, if that makes sense. Many people died, and just because one very improbable thing happened.

And sure, the bulldozer belonged to AIMM, but I don't think that is meant to imply that anyone is guilty of causing the outbreak.