A Heart Can Only Take So Much 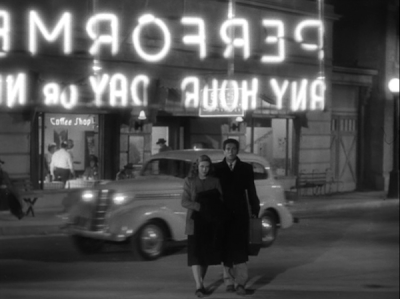 In 1937, Edward Anderson published a novel that I am chagrined to say I still haven't read. It's called Thieves Like Us, and while Anderson is not well-known by any means, and in fact only wrote one other novel (Hungry Men in 1933), Thieves Like Us remains a hugely important work of crime fiction, even if only due to its two film adaptations. The second of those films is 1974's Thieves Like Us, directed by Robert Altman. It's a terrific film, one of Altman's best '70s movies, and it plays now -- though I admit that it was almost certainly not conceived as such -- as something of an antidote to Bonnie and Clyde. Altman's film humanizes its criminals as well as their victims, something which almost feels subversive of a certain attitude of the time. But Altman's Thieves Like Us, good as it is, still can't help but feel a little bit like leftovers, because in 1949 Nicholas Ray made his directing debut with an adaptation of Anderson's novel, this time called They Live By Night, a film that, when viewed as a first film, must shatter the morale of any number of bearded, bright-eyed cynics currently studying Ray for film class. It remains a breathtaking piece of work, and certainly one of the most emotionally devastating films of the noir cycle.

They Live By Night doesn't have much to recommend it -- it has everything to recommend it. Most immediately gripping are the performances of Howard DaSilva as the one-eyed Chickamaw and Jay C. Flippen as T-Dub. These are the men, older and professional and mean, with whom the comparatively childlike Bowie (Farley Granger) escaped from prison where Bowie had spent the last seven years, starting when he was 16, for fraternizing with the wrong element, and falling along with them; Chickamaw and T-Dub were there because they deserved to be. DaSilva and Flippen are perfect, easy and clipped in their professional modes, with DaSilva bringing otu Chickamaw's hidden wild side breaking out maybe once or twice too often for Bowie's comfort. But upon obtaining his freedom, Bowie, who hopes to hire a lawyer to get his murder conviction overturned, is young and stupid and therefore willingly hitches his wagon to the two older men, agreeing to assist them in a series of robberies they begin planning right away. This both dooms and damns him, as it damns (if not dooms) Keechie (Cathy O'Donnell), a young woman he meets among the network of family and friends Chickamaw and T-Dub employ to keep them hidden and fed. Bowie and Keechie fall in love, and if ever a more heartbreaking romance has occurred within a cycle of robbery, murder and general criminality, I haven't seen it. 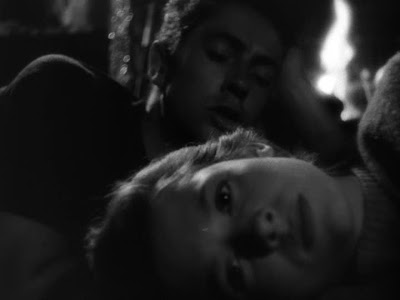 This is the brilliance of They Live By Night. Because look, I'm not one to feel a great deal of sympathy towards criminals in films, because often the pleas for that sympathy is presented (or brayed, usually) by the filmmaker as "Hey, okay, this guy's a criminal, and okay he killed that one guy. But please remember, I've taken great pains to present the police as a bunch of hicks, and anyway my hero would rather not go to prison. He even wants to quit being a criminal, if society would only let him. And remember that scene with his daughter, the one in the diner? Man!" Something like that, anyway. However it might go, I routinely reject it, and my hackles have a tendency to go up if I think a film is trying to court me in that way. Inspire empathy for the criminal? That's one thing. Root for the son of a bitch? That's something else entirely. But They Live By Night is different. You might argue that making Bowie apparently innocent of the crime that landed him in prison is some serious deck-stacking, but it also shows him falling pretty easily into the role of getaway driver for Chickamaw and T-Dub. Not only does he agree to it, he does it almost gleefully. Bowie is an idiot -- that's his tragedy. The film offers no excuses for his criminality, but it's not hard to understand how you can be dumb at 16 and, in the circumstances under which Bowie has been living, come out at 23 just as dumb.

The film contains genuine beauty. Cathy O'Donnell's Keechie has a moment at the end of the film that's as gorgeous in its open-heartedness as the final shot of The Third Man is in its bitterness. In the brief moments when she and Bowie -- and Granger was never better -- are able to tear themselves away from the idiotic and dangerous world they seem lost in, Nicholas Ray actually makes it possible to root for Bowie. His remorse, we see, is genuine, and his simple desire for a normal life not spent robbing people or hiding from cops, evokes actual sadness. When he says to Keechie that he wishes they could go into town and see a movie, and that he's always wanted to hold hands with a girl in a movie theater, Ray basically points out the line dividing sentiment and sap, and how to stay on the right side. There's no pleading, no whining, just a genuine expression of feeling. And later, when Bowie comforts an ailing Keechie, and dreams out loud of a day when they might have a child, and says that children make a man responsible, there is pleading here, but it's a plea from Bowie, masked as reassurance of Keechie, that he will, one day, learn to do the right thing. Even Roy Bean would crumble if faced with that.

That's where They Live By Night achieves greatness, but generations of filmmakers who followed learned his lessons poorly. I suppose they only halfway paid attention. No, where They Live By Night seems at times most influential is in its portrayal of the fringe parts of criminal life. Along with the country roads and farmland that is the often forgotten in favor of urban settings, but still very common backdrop to this sort of story, are the side characters, like the aforementioned network of cohorts. Not quite criminals themselves (though Bowie does, with reason, claim that one of them is a "thief, just like us"), people like Helen Craig's Mattie, or Will Wright's old, drunken Mobley help complete the film's world -- not an underworld, really, but one just off to the side, easily seen if one chooses to, but usually ignored. Diners and gas stations, and nothing nothing but tall grass for miles, before you find another gas station, manned by somebody like Mobley, who has staying with him someone like Chickamaw, or T-Dub, or Bowie. This is closer to James M. Cain's fiction, or James Hadley Chase's No Orchids for Miss Blandish. A world that's wide open and barren, rather than closed-in and towering. In the city, if you want to get away, you find there's nowhere to go; there's always something or someone in your way. You can't swing a dead cat. In the country of They Live By Night, meanwhile, you have everywhere to go. That's the problem: the road never ends. 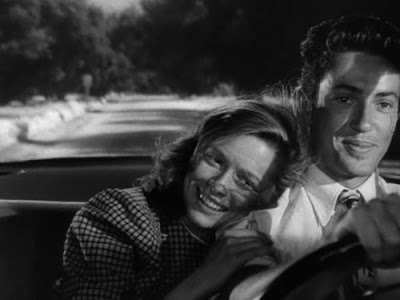 An excellent piece, Bill. I haven't seen They Live By Night, but Thieves Like Us has often in my mind considerably bested some of Altman's more canonised films of the '70s.

Thank you, Rod. I sort of can't believe you haven't seen THEY LIVE BY NIGHT, though. I thought I was the only person who had blind spots.