What Has Been Must No Longer Be 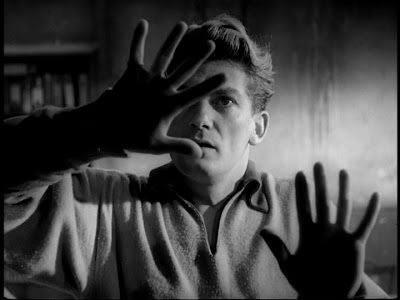 This coming Tuesday, Criterion will be releasing to discs that bear certain striking similiarities. One is a re-release of Jean Cocteau's magnificent Orpheus from 1950, and the other is the complete works, meager in number though they unfortunately are, of Jean Vigo, the French filmmaker who died at age 29 from tuberculosis, shortly after the release of what naturally turns out to be the centerpiece of the Criterion set, his one feature length film, L'Atalante. So yes, both are French and end with with the word "Fin", but would you believe it goes beyond that?

Cocteau's Orpheus begins with narration explaining that the film is a retelling of the Greek myth of Orpheus and Euryidce -- her death, his journey to the Underworld to save her, her release from death on the condition that Orpheus may never look at her, and the consequences of doing so -- and that while this telling may seem modern, it can be understood to have taken place and any time, and any place. (A minot point, maybe, but I like the fact that Cocteau's Orpheus and Eurydice, played respectively by Jean Marais and Marie Dea, are simply named "Orpheus" and "Eurydice". I can easily imagine a modern retelling of the myth in which the lead character's name is "Orville Pheus", or something equally ridiculous.) What's interesting about Cocteau's film is how it reveals to us that Orpheus and Eurydice's marriage is weak at its core, and that for Orpheus the Underworld beckons, because he has fallen in love with, literally, Death itself, or herself (Maria Casares). But all of the tragedy and most, though by no means all, of the heartbreak that accumulates as Orpheus goes along is reversed, so that passion is replaced by a fresh ignorance. As happy endings go, it's not that happy, though the alternative is impossibility.

The brilliance of Cocteau's film is the easy touch of his fantasy -- these elements of the film have a floating quality that reminded me of the Dali dream sequence in Hitchcock's Spellbound, but without that ruthless explanation of every little bit of weirdness. Plus it just looks great -- the shot of Orpheus and Heurtebise (Francois Perier), Orpheus's guide to the Underworld, falling sideways along a wall is seamless, and might well have been the inspiration for the best scene in Nolan's Inception, the zero gravity hallway fight.

L'Atalante doesn't contain any actual fantasy elements, though it does have its share of strange imagery. Such as: 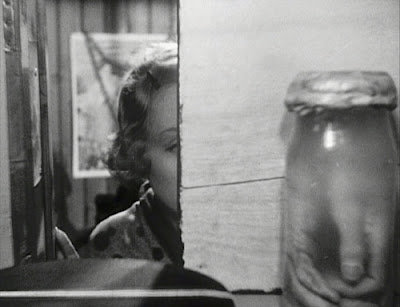 I mean, that's not normal. And even in the 9 minute Taris, which is a mix of documentary, instructional film, and promotional piece for chamption French swimmer Jean Taris uses the same film-reverse technique featured more hauntingly by Cocteau in Orpheus. More to the point, though, is the fact that Vigo's last film -- and the Criterion set also includes Vigo's gently If...-like Zero for Conduct, which at 44 minutes is the second-longest film Vigo made; as well as two shorts, Taris and A Propos de Nice -- also depicts the collapse of a romance, only to see it rebuild in the final moments. Not just that, but Jean Daste', who plays the jealous groom, works and lives on a river barge, which is a stinking job, and a weird world for Dita Parlo as Juliette, the bride, to find herself in. Though barge-life is not presented as sinister, there is an underworld, or Underworld, quality to it all (shipmate Michel Simon's puppet show is, perhaps inadvertantly, kind of terrifying), though both bride and groom seem able to exist there together. It's when the regular world breaks in that jealousy and the desire for what you don't have, start to shake Jean and Juliette apart.

In both Orpheus and L'Atalante, an unpleasant, unhappy, and undesirable world set far apart from what most of us know, and as a place where dreams come true -- both films are surprisingly pro-death -- while simultaneously stealing away every other part of your life.