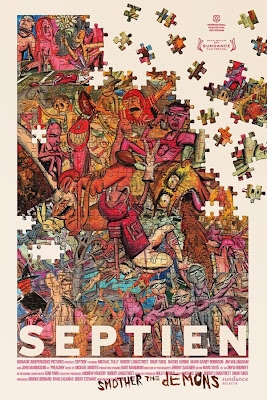 Well now here's a thing: the title of Michael Tully's very, very curious film Septien has no clear meaning, or even oblique explanation, within the film itself, but once the interested viewer begins his or her search, they will very quickly come across the name Rafael Septien. Septien is a former place kicker for the Dallas Cowboys who, in 1987, was convicted on child molestation charges, and has since vanished from the public eye. If you encounter this information after watching the film, your reaction will probably be to say "Oh", because that actually is something of a clue, and it would be hard to view the connection between the film Septien and the facts of Rafael Septien's crimes as a coincidence. Even if you somehow could manage that, Michael Tully has already addressed all of this in a short piece posted on NBC's Dallas-Forth Worth website, in the section devoted to the Dallas Cowboys:

[A]ccording to Tully, the film's writer, director and star, “the word ‘Septien’ captures that nostalgia we feel towards our boyhood sports idols and the disillusionment we experience when we find out our heroes are not the people we thought them to be.”

Leaving aside the unlikelihood that any sports-inclined child would idolize a place kicker, I must say that as an answer that could not possibly be arrived at by information contained in the actual film, Tully's explanation for why he called his movie Septien is pretty damn good, as far as I'm concerned, and manages to enrich the film (I like an interesting title) considerably. This is good because the film needs it. 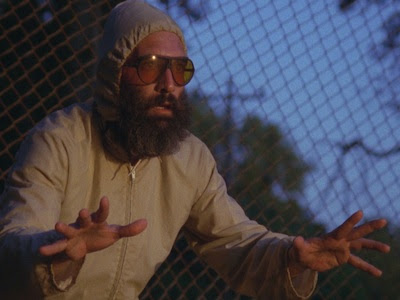 Which is not to say that the film is bad, because it's not. It's actually pretty involving, and manages to build a very strong amount of queasy suspense very quickly. It begins with a series of painting, over which the opening credits play, that look like what might be produced by an unholy hybrid of Hieronymous Bosch and Bill Sienkiwicz, if one or the other of them played sports (or hated sports, or both). These paintings are the work of Amos Rawlings (Onur Tukel), one of three brothers around whom the film will revolve. Amos paints away in the shed of a family ranch, which is now being run by Amos's brother Ezra (Robert Longstreet), a fastidious man, and a religious man, one who objects to Amos's obscene artwork in a general but unobtrusive way, and still brings his brother a glass of orange juice every morning (as well as to Wilbur Cunningham, played by Jim Willingham, a simple-minded friend of the family, it would appear, who lives on the ranch and is doted on by Ezra). These quiet, vaguely tense lives are upended when Cornelius (Michael Tully), the third brother, returns after having disappeared for 18 years.

The film turns out to be less about Cornelius than it first appears, although the reason behind his disappearance turns out to be central, as does the fact that he was a big-time high school athlete, mainly in football, but in just about everything else, too, as we see him hustling people at neighborhood tennis and basketball courts. But the film is about all the brothers equally, and the way Tully reveals the degrees to which each of them has had some aspect of their sexual lives either warped or repressed comes to define everything else. Rafael Septien wasn't chosen just because he was an athlete who was attached to a scandal, you know, but that really only takes care of one brother. Ezra -- and Longstreet is really excellent in this -- does not know anything about why Cornelius ran away for so long, and one key element to the brothers is that Ezra is the outsider. Amos and Cornelius are outside of everyone else on the planet, and are close as a result. But somehow Ezra is even further outside, even though he seems to be the most functional. The truth is that Ezra is gay, and due to his various circumstances would probably much rather not be. This has led him to become the almost mothering figure he is at the beginning of the film, and it's this quality that has put off Cornelius and, especially, Amos. 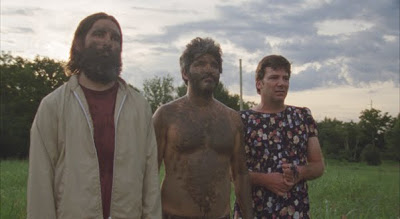 It's also around here that the film becomes unhinged. A plumber and one-time high school football coach (Mark Darby Robinson) enters the picture, and I'll leave most of what happens from there for you to discover. But the film becomes quite bizarre in a way that isn't particularly welcome. If one had to compare Septien to anything else, it felt to me very much like a cross between Jeff Nichols's Shotgun Stories and Terry Zwigoff's Crumb -- I was entirely on board with that unlikely mix. In the last twenty minutes, though, Tully decided to add (I mean this in terms of tone and style more than actual incident) Steve Balderson's Firecracker, that bullshit piece of phony Southern Gothic dumbassery that Roger Ebert, and only Roger Ebert, loved so much. That film was a dishonest bit of rural, carny, grisly New Age hokum, and Septien decides to follow suit. In short, the film becomes magical, and, worse -- or rather, this is the bad part, because "magical" might have worked -- easy. As long as I'm comparing Septien to every movie under the sun, I might as well point out that once it starts reminding me of Firecracker, it also starts reminding me of Good Will Hunting -- something very awful and traumatic gets talked through by way of a mantra. But this film's Robin Williams is magic, so I suppose they got around my objection this time.

Worse than that is how the film comes to treat Ezra. It turns him into a grotesque, and as a man who somehow has something to answer for. The fevered mania of Septien's climax is actually rather objectionable, because while Cornelius and Amos are treated with some weird kind of dignity, Ezra is shamed, and we're meant to laugh at him. This is especially odd as we're not meant to dislike the man, but we are supposed to believe that something in him should be corrected. Not his homosexuality, mind you, but his "motherly" tendencies, although what his brothers and the film regard as unappealing and presumptuous and bossy, I regard as productive and helpful, and you fuckers would starve without his mothering. So fuck you. And then, yes, we aren't meant to object to Ezra's homosexuality, but at the same time that's weak spot the filmmakers pick when they want knock him off his pedestal. Very odd.

But anyway. This is largely a good and interesting film, one that grew, and abstracted itself, from a strong notion, but one that finally loses itself in its own weirdness. This is something that often happens, I've noticed. Still, if Rafel Septien ever comes to know of this film, he will have to view it as a terribly bizarre form of immortality. And to think that's just what he's been trying to flee from all this time.
Posted by bill r. at 12:46 PM

When I see Septien I'm going to compare it to Saving Private Ryan, Boomerang, Batman Returns, West Side Story and Do the Right Thing.

I've never heard of this film or Firecracker so this may be the most informative post I've read today.

I idolize punters. They get paid NFL minimum salary (almost 200k a year!) and they're the only position where it is literally a penalty to be touched. I mean, shit, it's like you've hit the jackpot! No fear of tackles or injury and even if your punting sucks, fans blame the offense for not converting third down. Best. Job. Ever.

There was a field goal kicker a while back, I want to say for Detroit, who was also a stand-up comic. They did some pre-game story on him one Sunday, and showed some footage of him on stage. The only joke I can remember is at one point he looked at his watch and said "Oh damn, I gotta get back to the game!"

DO NOT SEE FIRECRACKER! Even out of curiosity. It's wretched. And then if you watch it and listen to the commentary and realize what an arrogant, condescending prick Balderson is, you might try to blame me for subjecting you to it. But I won't have it!

I kind of do want to see it since there is only one critic on Rotten Tomatoes reviewing it, Roger Ebert. How weird. It's like you and he are the only two people in the universe who saw it. He loves it, you hate it. It's almost irresistable to me now.

Really?? That's strange (about the RT thing), because the damn thing got a DVD release, and I rented it from the now-defunct Hollywood Video. It's not like I had to send away for it from Scarecrow Video or Amoeba or one of those other crazy-well-stocked independent video stores.

Anyway, I can now understand your curiosity. Godspeed.

In my opinion, Ezra is not gay. He feels guilty that he might have caused their mother's suicide and he has taken her place as penance. Its also a way to stay connected to her and not move on.

The mystic ritual at the end isn't shaming him out of being gay. Its releasing him from unnecessary guilt. And from fulfilling a role for others that isn't required by them.

Its Amos who is gay and can't admit it. Because he witnessed, to a degree, the rape of his brother Cornelius by another man. Even though homosexual sex can, of course, be consentual, this has scarred him from other male sexual encounters, especially after he saw what it did to his brother.