Shooting Horses Out of Season 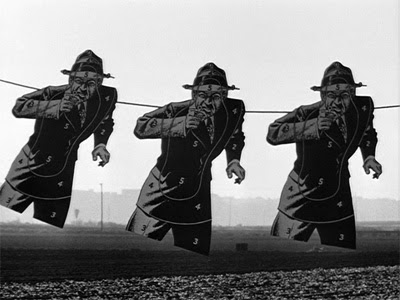 My goodness, but The Killing looks good, some fifty-five years after its release. And I can testify to the fact that one does not need a blu-ray player, or, so it follows, a blu-ray disc, to appreciate the forthcoming Criterion release of Stanley Kubrick's early noir classic. You may pick your poison, but my standard DVD presents the film as just as gorgeous and gray and deep and dark and cavernous and sunny as it ever was. As you see: 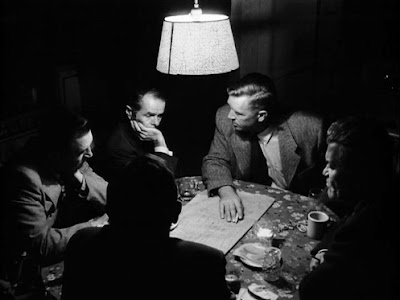 The Killing finds Kubrick, the hungry young pup, in efficient artist mode, the kind of filmmaker the auteur theory seemed made for, though he would obviously shrug off the whole "efficient" part soon enough. Which isn't a knock, because I will punch you in the teeth if you try to speak ill of Kubrick, but boy is this thing brisk and to the point. There's no meandering as the racetrack heist is planned, carried out, and then imploded. The implosion, in particular, seems to happen all at once, or like the rapid pops of a string of firecrackers. 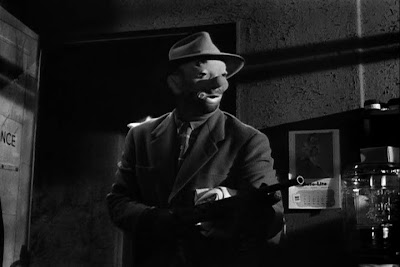 You might say there is meandering of a sort in the various acting styles employed. Kubrick famously liked big, howling performances, stylized to the hilt, and while his cast is led by the ever business-like Sterling Hayden, and also includes the well-trained meekness of Elisha Cook, Jr. (poor bastard), you have, on the other hand, Timothy Carey, one of cinema's great loons. How Kubrick must have laughed at Carey's bizarre performance -- the guy hardly ever parts his teeth when he talks. It's like his character's jaw is wired shut, except it's not. Here's Carey pictured with James Edwards, who, six years later, would freak out memorably in The Manchurian Candidate: 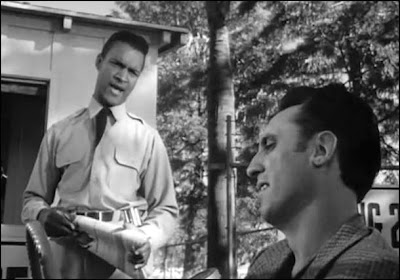 Edwards seems barely able to contain himself in his few scenes -- whatever emotion he happens to be feeling in the moment, he's feeling the ever-loving shit out of it. Then, also, on yet a third hand, you have someone like Kola Kwariani in his only film role. Kwariani comes off as a more avuncular Tor Johnson, and about as coherent. A wrestler and chess enthusiast, Kwariani has long stretches of dialogue that sound like complete gibberish, but given both the film's strangeness and its expert pacing, this never matters. Kwariani's the muscle, and otherwise sort of gentle. There you go. 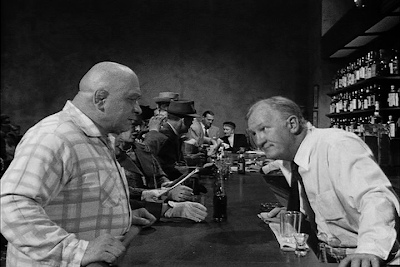 What you have ultimately with The Killing is one of the great heist clusterfuck movies, and one of the great fate movies. That last one is what noir is supposed to traffic in, but it doesn't always, and even when it does fate tends to loom like a buzzard, or, more precisely, like a buzzard's shadow. That's not to say you don't sense fate constructing its plot against Hayden's Johnny Clay -- it's just that you don't hear the thud of approaching doom. You expect it, but you don't hear it. In keeping with The Killing's police blotter narration, read by Art Gilmore, the film proceeds like a news story, the summarizing headline of which you've already read, so you can read along and marvel at the foolishness of those who you know to be dead, or lost, or gone away. 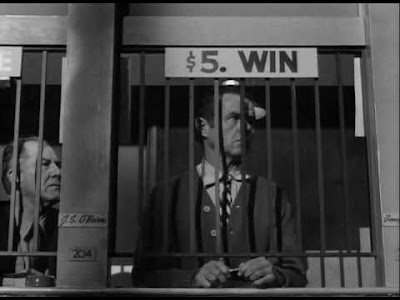 There's some rich humor to all this, too, shot throughout, but the end of the film is a wild contrast between an "oh shit!" kind of laugh and an...I don't know, appreciation seems too weak a word for how I feel about what Sterling Hayden does in the film, from the moment he arrives at the airport to check his bags to the moment when THE END fades up ominously on screen. Hayden was one of the great no-bullshit actors, and in films like this, and also in this film (I feel it's important to not forget that), he was almost always the smartest guy there, whether he played a cop or a hood. But the masterpiece of acting in The Killing, if it has just one, is when Hayden, as Johnny Clay, realizes that he messed up bad, and has to try to talk his way around it, like a normal citizen, to a couple of airport employees who won't budge, because they can't, but are entirely professional and polite about completely, albeit unbeknownst to either of them, destroying Clay's life. And Clay is a professional in his own right, and he's trying to hang on to that, because to lose it would be to lose his last hope. But just to watch a big, tough, un-fuck-withable guy like Sterling Hayden scramble like this is kind of amazing. It's like watching Lee Marvin get lost. 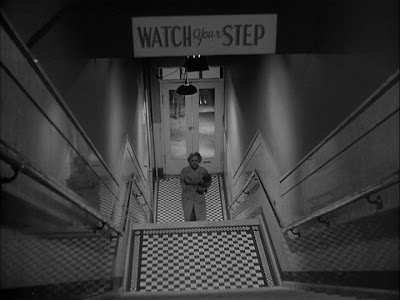 The Criterion disc for The Killing comes with one of the more exciting extras of the year -- a whole entire other Kubrick film. Killer's Kiss, from 1955, is not Kubrick's very first film, but it's the first film he was willing to acknowledge might be worth anyone's time to watch. Another film noir, what struck me most about watching it today -- and I'd never seen it before -- was that in the opening credits it says that the story was an original idea of Kubrick's. In the documentary Stanley Kubrick: A Life in Pictures, Kubrick's widow Christiane says that one of the great frustrations of her husband's life was that he was unable to invent his own stories, and was therefore driven to adapt all his films from other writers' work. All his films save Killer's Kiss, but you can see here that this brief, at 67 minutes, film doesn't have much of a story at all. The narrative of Killer's Kiss seems less like an idea than an excuse -- an excuse to film boxing scenes, an excuse to film a rooftop chase, an excuse to film in a mannequin warehouse. Especially that one. The film is full of contrivances to move the plot, such as these couple of jokers: 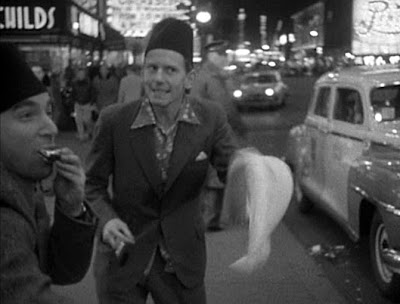 ...taking Jamie Smith's white scarf just so he can chase after them and take himself away from where he needs to be, thereby being missed, ruining plans, endangering others, and all the rest of the things you need to keep it moving. Of course, it wouldn't be the first film helped along by contrivances. Hell, The Killing has the tire-puncturing horseshoe, one of the more desperate lunges for irony I can think of. No, Killer's Kiss is not a film noir in the mode of The Killing. It's part of the tradition that includes Blast of Silence and, actually, a genre switch here, but also Carnival of Souls. You can see the kinship with Blast of Silence, for instance, in the shots of New York, as it was then at that moment -- the shop windows with the creepy automaton Santa Claus and the pastries and the wind-up swimming toy, and the rooftop chase.

Boy, though, I don't like the ending too much, the reunion in Grand Central Station. One of the parties that make up the reunion does not deserve the ending they're being granted, which might be the point, except that the swell of romantic music doesn't support this. Still, though... 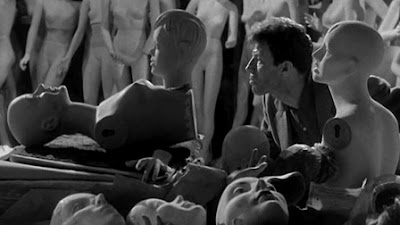 James Edwards was the man.

James Edwards was the man!

I love The Killing. I've watched it a few times on TCM, either in part or whole. I love Kubrick's very early black and white period because he drew on his photography styles at Look Magazine and the images have a clear, crisp feel to them. A really clean, sharp look where, even if it's just a frame of guy standing by a car you think, "Man, that looks awesome!"

I used a couple of clips from Killer's Kiss for my Noir trailer for the blogathon last year but, honestly, that movie just doesn't grab me despite its great look. The difference with The Killing isn't just a better story but a much higher quality of acting, both of which you rightly point out.