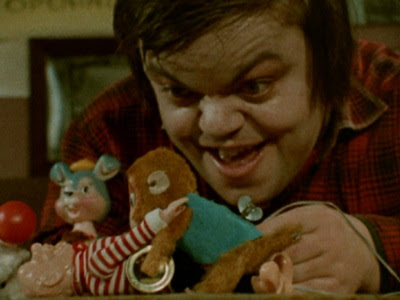 Last night, I was up late and I fell asleep while watching Vidal Raski’s The Sinful Dwarf. The Sinful Dwarf, a notorious, sleazy, apparently Danish-British co-production, is about a destitute British couple who take a cheap room in a boarding house run by an ex-cabaret singer and her depraved son Olaf, the titular sinful dwarf. The story involves kidnapping and heroin-assisted sex slavery, and various forms of rape – which I suppose is redundant – and the whole thing is really sort of objectively nasty and unappealing. And I fell asleep during it. If the watching of The Sinful Dwarf is going to be stopped before its natural conclusion, one would assume this would come about because the “stop” button on the remote had been frantically mashed down in disgust. But no, in my case, I just dozed. Here I thought I was going to watching something truly appalling, and instead the most horrible moments are obscured by camera trickery! Yawn.

I’m not going to pretend to be more disturbed about this than I really am, or, actually, that I’m disturbed by this at all. I’ve become convinced that what happens in movies isn’t real, to begin with, and also that depicting a thing is not the same thing as advocating that thing. There are limits, certainly, but despite its infamy The Sinful Dwarf does not reach, let alone exceed, those limits (despite what Severin Films, the company that released the 1973 film on DVD, would like you to believe, as expressed on a DVD extra called “The Severin Controversy”. In this, a couple of pothead movie fans of dubious sincerity are interviewed and explain why they think The Sinful Dwarf should not be released on DVD. This extra also repeats rumors about Torben Bille, who plays Olaf, as fact, and misidentifies actress Anne Sparrow). It’s rather less disturbing than comparatively mainstream films like the original The Last House on the Left, but it does have a crazy dwarf in it, which for whatever reason has a tendency to cause people to regard the sleaze quotient as significantly upped. 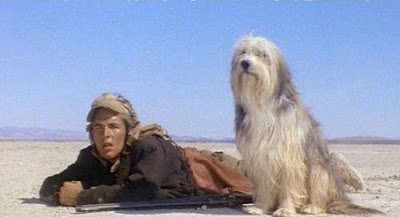 But regardless. My experience with The Sinful Dwarf (I finished watching it this morning, you’ll be relieved to hear) was only highlighted by the fact that I realized I watched a lot of exploitation films this weekend, to the near exclusion of any other kind of film. Again, I don’t think much of this, nor am I the kind of person who would try to explain the existence of a film like The Sinful Dwarf by saying “Well, Vietnam.” What does strike me about my recent viewing habits is the variety of both types of film and of my personal motives for watching them, as well as how closely those films met expectations, or were even interested in meeting them. Take A Boy and His Dog, for instance, L. Q. Jones’s adaptation of Harlan Ellison’s classic science fiction novella. The fact that A Boy and His Dog is often referred to as an “exploitation film” makes me think that it’s just possible that the definition of “exploitation film” is an "R-rated genre film that was made back when they used to make films called 'exploitation films'.” Because A Boy and His Dog is simply an excellent piece of science fiction that has a little nudity and a little violence. Jones doesn’t slather his film with either. See also William Lustig’s Maniac Cop – this one is made by the same guy who made Maniac, a true exploitation film, and yet it plays like a straight suspense/horror film. A film about a possibly supernatural, undead New York cop hacking up fellow cops and innocent citizens, it’s actually remarkably unbloody. Films like Maniac Cop supposedly exist to sate the public’s desire for viscera, but this one doesn’t really do that – it didn’t do it for me, okay? – and further doesn’t actually want to. It’s an exploitation film only based on genre and budget. There aren’t even any boobs in it! 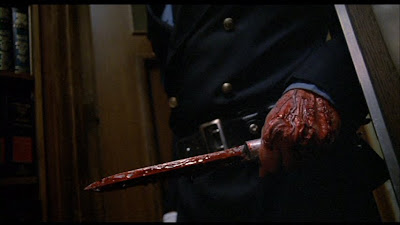 At the same time that civil rights and Vietnam were forcing independent filmmakers to make violent movies, Hollywood studios developed their own brand of exploitation film known as the “disaster movie.” And currently I find this to be the most interesting, if far from the best, type. I was watching Robert Wise’s The Hindenburg, you see, and as I read the credits I took note of the list of famous names – somewhat shorter than those in other disaster movies, but long enough – and found myself thinking things like “Hm, René Auberjonois…I wonder how he dies in this.” Because that’s the exploitation thrill of the disaster movie: watching movie stars and famous character actors get crushed or burned alive or drowned. If anything, disaster movies are maybe a bit less respectable than…well, not than The Sinful Dwarf, but Maniac Cop, at least, because disaster movies, with their A list stars (George C. Scott and Anne Bancroft in this case) and big budgets (and, in Robert Wise, even sometimes Oscar-winning directors) they try to pretend that you’re watching for more high-minded reasons. It doesn’t even have to be very high-minded; wanting to watching stuff blow up is less uncomfortably low-brow than wanting to watch Robert Wagner burn to death.

And then when a disaster movie fails to provide what the genre surreptitiously promises, the viewer’s shameful desires are exposed. Because you know how René Auberjonois dies in The Hindenburg? He doesn’t! Nor does Burgess Meredith or Charles Durning or Anne Bancroft. Plus, those famous actors who are shown across are done so artfully – once the zeppelin ignites, Wise switches the film, inexplicably, to black and white (because 1937 was in black and white maybe?), and I guess because The Hindenburg is a highly fictionalized account of a true disaster, all the lowdown thrills are leeched away because now we have to feel bad. Yet for a serious-minded disaster film, The Hindenburg is curiously, or maybe not so curiously, inert – you can practically see George C. Scott cashing his check – and while Robert Wise’s The Hindenburg beats Mark Robson’s Earthquake in the Disaster Movie Directed by Someone Who Once Stabbed Val Lewton in the Back and Helped Drive Him Into an Early Grave Sweepstakes*, it’s also occasionally laughable (when it’s not being inert, I mean), such as at the end when still photos of all the characters are shown, and a narrator provides their names and then says either “Dead” or “Survived” – the list ends with a photo of a dog and the audience-relaxing announcement “Survived.”

So I was annoyed that Burgess Meredith didn’t get crushed by a burning girder, and I fell asleep during The Sinful Dwarf. But it may not just be the desensitizing effect of cinematic sex and violence at play – The Sinful Dwarf’s unsurprising incompetence didn’t enliven me any, either. Even my favorite bad movie thing, idiotic dialogue, left me largely unmoved (the film includes one of my favorite types of bad dialogue, which is a two person exchange where the response to a question doesn’t quite match the question, as in: “Do you know how to use a gun?” “You’re damn right I can!”). I suspect that “exploitation film” being a meaningless phrase, certainly now and to a degree even when the phrase became popular, is just as big an influence. Exploitation audiences simply didn’t kid themselves – this, I suppose, is the difference. And wanting what such films offer is no different, in the end, from wanting what a comedy offers. Also, when it gets late, you get sleepy.

*I get very angry about what happened to Val Lewton.
Posted by bill r. at 5:27 PM

*I get very angry about what happened to Val Lewton.

Indeed. And I hate to be the first comment AND go off on a tangent, but do you have any recommendations for bios of Lewton? The Scorsese TCM bio left me with more questions than answers.

The 1970s genre of lofty, high-minded, star-studded action-disaster flick is hilarious. I don't mean any specific film or performance, either, but the entire genre provides absolute hilarity, both on screen and on paper. The formula was basically "Love Boat with special guest stars gets hit by a torpedo", and while some examples are, as you note, very boring, there is often at least amusement in the knowledge that enough people were excited about the project that it got made, at great trouble and expense.

For Lewton, nothing I can recommend personally, but there's a book called FEARING THE DARK: THE VAL LEWTON CAREER that is supposed to be good. A bit spendy for a book, though.

And don't get me wrong, I love disaster movies, at least in theory. THE TOWERING INFERNO is the best, which probably goes without saying. It's precisely what you want it to be, and even manages to contain a very good, very interesting performance by Steve McQueen. And it's like 4 hours long, so you don't have to make any other plans.

FREAKY! I just watched The Hindenburg too! And let me say, "Wow! What a boring movie!" Seriously, that thing plods along with all the usual Wise flair, which is, of course, no flair. The black and white at the end made sense, though, because he wanted to match the footage. Now, he could have made the whole movie in black and white, that would have made more sense. But given the option of showing survivors in color mixed with buring blimp in black and white, I think they made the right decision to go with BW at the end.

Now then, were you as confused as I was as to whether Scott set off the bomb on purpose or slipped or time ran out? It didn't make any sense, really. He's working on it, sees the Gestapo guy and "BOOM" it all goes up.

Also, the real Hindenburg went up in smoke in less than 60 seconds. I love how they stretch it out to around ten minutes by constantly freeze-framing the burning blimp. God, what a lousy movie. Cool-ass blimp miniatures, though!

Greg, I suppose your explanation for the switch to b&w makes sense, but I didn't think it worked that way. The texture of the black and white for the film was way off the newsreel footage, and it played as a random choice to me, rather than a motivated one. The whole film in b&w would have solved it, but I'm not really sure it was necessary. I mean, you point out the terrible way they portract the actual burning of the Hindenburg for the sake of the drama on-board, so any stabs at verisimilitude by that point were meaningless.

And no, I don't know what happened with Scott and the bomb, either. My assumption had been that Atherton set the timer incorrectly, but there's nothing onscreen to indicate that's what happened. Maybe it was rigged to go off when Nazis are nearby.

Oh, and the gymnast's sketches for his big "Zeppelin Acrobatic Routine"! The fuck?! That was one of the dumbest red herrings I've ever come across. Could he be a spy? Are these drawings part of a plot? Oh no, he's planning a gymnast blimp show! Seriously, some real stretching going on there.

And the dog surviving was pretty awesome.

Oh yeah, if you look at the opening shot again, of Milwaukee in 37, you can clearly see 1975 cars and trucks driving around. They really went all out for this one.