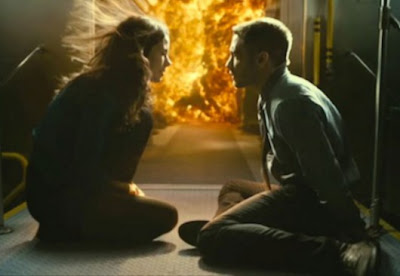 My friend – both internet and really – Greg Ferrara recently posted something very on-target about film endings, in which he saluted a few films that are sometimes, or even often, regarded as having “non-endings.” In these specific cases, Greg is absolutely correct, but either way the post lines up with some thoughts I’ve had about film endings lately. I haven’t been focusing so much on non-endings and their opposites, but more on how important a good, or simply decent ending is. If you punt the ending of your otherwise excellent film, then it will be disliked more intensely than if the whole thing was just fine. By me, anyway.

Cases in point, and the films that have me thinking about this, are Duncan Jones’s Source Code and Neil Burger’s Limitless. Both are basically science fiction thrillers, building from genuine SF ideas but, in the case of Limitless, coasting mainly on its thriller tone. Source Code is the better film. It’s premise is odd and, I found, hard to grasp completely, but not hard to follow in the broad sense, and the science fiction-ness of it all could not be separated from either the thriller elements or the genuine emotion that builds throughout. Limitless is more jokey, more off-hand, less interested in itself. Not taking itself too seriously, which Burger’s film doesn’t, isn’t a bad thing, but being uninterested is. It’s a fun movie, but slight. So Source Code is chugging along, winning this race I’ve set up, until the ending which, the more I think about it, is an absolute disaster. That genuine emotion I mentioned before is discarded by Jones (or the studio, I guess) at the same time he’s pretending to expand on it. Source Code was a thriller with an underlying melancholy that it almost, almost, capitalizes on, that it almost makes count as the most memorable facet of this pretty relentless thriller plot. And then it fucking tanks it! The panicked babble about whether the melancholy ending would fly with audiences is practically audible. You can reconstruct the conversation, about sending audiences out on a high as opposed to a low, this is an expensive movie, goddamnit, in your head, and if you were into the film up until about three minutes from the final credits, then you just deflate. A good film spoiled. 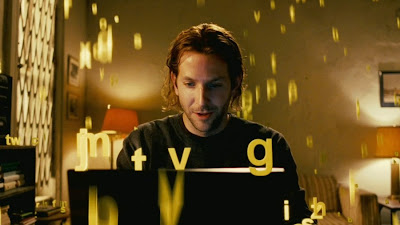 Meanwhile, Limitless just sort of scampers along, keeping its ambitions and tonal shifts in check. And for a movie about suddenly becoming a genius, it can even be pretty stupid at times. For instance, the film is about this pill you can take that will increase the amount of brain power you use from 10% (or whatever random low number out of many I’ve heard that the film actually uses) to 100%, and this allows you to do anything at all you might wish to do. So Bradley Cooper does this and gets into all sorts of trouble, and is being followed, and at one point his girlfriend, Abbie Cornish, is being chased by a bad guy, and she’s in Central Park, hiding behind a rock, and decides to take one of these genius pills to help her think her way out of this jam. After doing so, she’s all “Aha!”, and she runs onto the ice skating rink they got in Central Park, and the bad guy follows her, so she grabs a little girl and swings the girls legs at the bad guy so the girl’s skates slash his face open. This strikes me less as a brilliant plan that couldn’t fail as a monumentally ridiculous one that just happened to work. But what do I know, I never claimed to be a genius.

By the time it’s all said and done, though, Limitless has gone out on a high note and Source Code hasn’t. Not that Limitless tries very hard, but by sticking to its loose, flippant demeanor, it’s able to have a kind of winking, crowd-pleasing exit that makes you sort of smile, which is better than making you sort of say “Why did they piss all over their ending?” Limitless is contrived and no big deal either way, but it’s at least savvy enough to use “Howlin’ For You” by The Black Keys, which is the sort of thing that middle-of-the-road movies always do, specifically, riding the coattails of a cool song into their own contact-high form of coolness. That’s how Limitless plays its hand. Not overly appealing, perhaps, but that’s better than folding. Although I don’t imagine I’ll watch either film ever again, so call it a push.
Posted by bill r. at 7:52 PM

Isn't it funny how something can bug you in a movie you don't like but you're fine with it in a movie you like? I haven't even seen Limitless but the brain thing really bugs me(the 4 or 6 or 10 percent thing has been debunked so many times it's almost not worth mentioning - almost - but is worth mentioning because it is a complete myth!).

And yet, it not only doesn't bother me at all in Defending Your Life, I can't imagine the movie without it. Hell, just that moment when Albert Brooks guesses how much of a percentage he uses only to have Rip Torn say, "four" would be a great loss without the myth.

I've determined I like my sci-fi serious and un-self aware which explains why I like older sci-fi tv and movies, 2001, Blade Runner and A.I.. Screw flippancy and lighthearted fun. I really do miss serious sci-fi.

Well, good serious sci-fi. District 9 and Avatar both, mostly, steered clear of self-aware irony but I was monumentally disappointed by both anyway.

Honestly, it doesn't bother me in LIMITLESS. They could have simply said "This pill makes you super focused and crazy smart" and it would have been the same thing, so who cares? Plus the film isn't THAT jokey. It takes it's, you know, whatever, it's THEMES, seriously. It does not take itself seriously as an SF film, though. Anyway, I should stop now before it sounds like I'm trying to recommend it to you, because I'm really not.

I'll probably see it anyway. Once a sci-fi is available online I usually give it a look, even if under the poorest of circumstances (5 or 10 minutes here or there at 1:45 in the morning, randomly for three straight weeks until I'm done). Of course, if it hooks me, I'll watch it straight and proper, as I imagine Noel Coward might say if he were here right now.

And the brain thing, put it this way: Everyone has their button pushers and mine generally fall into "ignorance of science" categories. So, they bug me more than most, unless handled brilliantly, like Albert Brooks does in Defending Your Life, which I bet Noel Coward would have loved.

I think I probably DO love Noel Coward, though my experience of his work is so far limited mainly to BRIEF ENCOUNTER and IN WHICH WE SERVE. Obviously, though, this speaks highly of him. Are you on some kind of Noel Coward kick lately or something?

I just watched The Italian Job again last night, with Coward in it. He's awesome! As well as in Bunny Lake is Missing. Didn't watch that again last night but he is nevertheless awesome in it.

But Defending Your Life was just making a cute running gag out of that brain percentage bit, riffing on it like any comedian does with a dumb but funny idea.

Anyway, haven't seen either Limitless or the other one, but found myself in agreement with Bill's sentiments here. And strangely, feeling like I have seen them before. Time and time again.

You managed to post this the day after I watched SOURCE CODE and had exactly the same thought -- I thought a certain "moment" was the end, found myself getting teary-eyed and thinking, "Wow, this might be one of the better films of this year." And then the movie didn't end, and I was all like, "ARE YOU F*CKING KIDDING ME??"

OTOH, my wife preferred the actual ending, and she did point out that they set it up pretty well with some earlier exchanges in the film. So there's that.

Greg - I have seen neither of those. And BUNNY LAKE IS MISSING was the answer in a contest I won!

John - SOURCE CODE is pretty good overall. It's not as run-of-the-mill as you might think, until the ending which, as I've said, ruins everything. So don't see it, I guess.

Bilge - I don't remember them setting it up, but I'll take your wife's word for it. I still think the ending is a disaster, and it still feels like a last minute change. The moment that was making you teary-eyed was the right ending, and even if the ending we have was planned all along, someone along the way should have realized that a better ending was staring them in the face.