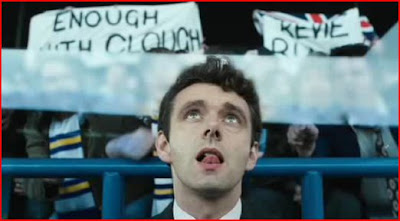 The Damned United (d. Tom Hooper) – Hooper’s new film The King’s Speech is currently angling its way towards some Oscars, or so people keep telling me, but his previous film, The Damned United, about the disastrous 44 days Brian Clough (Michael Sheen) spent as the manager of his one-time rival soccer team Leeds United, is sort of an Oscar-bait film in miniature. I don’t mean that as a knock, either, because The Damned United – based on a novel by David Peace, whose work also inspired the Red Riding Trilogy -- is hugely entertaining and satisfying. Sheen’s performance is one for the ages, all Yorkshire ego, brains and anger. In some interesting ways, this film is a sort of English version of The Social Network: smart fellow with a hidden store of arrogance gets snubbed and uses that experience to fuel not only his future success but also his disasters. Though I see I’ve already pretty much said this, Sheen’s work cannot be praised too highly, because while the film is a good one, and he’s surrounded by some prime supporting actors (Timothy Spall, Jim Broadbent, Stephen Graham, and so forth), it’s Sheen’s hysterical and fascinating Brian Clough that elevates this film to the realm of the Endlessly Rewatchable. Michael Sheen, über fucking alles!
. 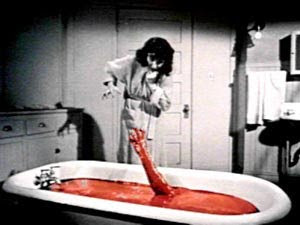 The Tingler (d. William Castle) – Please note the above image. Taken from Castle’s 1959 film The Tingler, it is one of the most striking images from horror movies from that era. The Tingler is probably nobody’s idea of the best of the genre, but almost any time it’s mentioned, the context is Castle’s ridiculous and ingenious gimmick of rigging the seats in the theaters that showed the film with little thingamajigs that would shock the viewer any time the titular creature made some sort of feeble gesture towards violence. But the film – about a scientist (Vincent Price) trying to isolate the tingle one feels in one’s spine when one is scared, ultimately discovering that it’s caused by a nasty-looking electric worm or whatever – is actually a good deal better than the gimmick (which, again, was awesome) would imply. Price gives a fine performance, seeming worldly and kind and natural throughout, but even better, or at least very different, is Philip Coolidge, who plays a movie theater manager whose deaf-mute wife you can see above. His entrance into the film, and ultimate motives, take on different meanings as you go along, but Coolidge never plays the guy as anything other than an aw-shucks, good neighbor sort. It’s kind of weird, actually. As is pretty much the whole film, and right smack in the middle is that bloody bathtub sequence, which is powerful, disturbing stuff created by Castle as a kind of sub-gimmick, a warm up to the literal shocks he had in store. You don’t see showmen like that anymore.
. 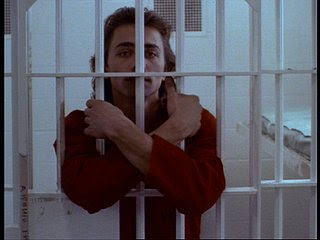 Rampage (d. William Friedkin) – A film I’d very much like to see on DVD is this one, Friedkin’s low-budget 1987 adaptation of William P. Wood’s thriller about a Richard Chase-like serial killer (a quite unnerving Alex McArthur), whose murders are both horrifying and repulsive, and who is finally brought down by the police and put on trial. The film’s main character is the prosecutor, played by Michael Biehn, who makes the counter-intuitive journey (for Hollywood, anyway) from being anti-death penalty to pro. It’s been quite a while since I’ve seen Rampage, and it wouldn’t shock me to learn that Friedkin stacks the deck in favor of Biehn’s ultimate conversion, and in any case my own views on the subject are nowhere near as confident as they were when I first saw the film. However, there’s something very powerful about the direct, cheap-paperback way in which Friedkin approaches the material, not to mention bracing about an American film not walking the expected path on a controversial topic. Not that any of that matters so much, really, because the film also features, apart from the good work done by McArthur and Biehn, Royce D. Applegate as a man whose entire family, save his son, were slaughtered by the killer, and Friedkin actually follows this man and his boy in the aftermath as they try to get away from it, leave everything, including the horror and anger. This section of the film doesn’t take up a hell of a lot of screen time, but almost no other film would include it at all. Add to that a typically excellent, yet forgotten, score by Ennio Morricone, and yeah, like I said, I really wish this was on DVD.
Posted by bill r. at 9:30 AM

Off-topic, but: What are you thoughts about the RED RIDING TRILOGY? I have some major quarrels with it, but it's a huge improvement over the source material, I think.

What are *your* thoughts *on*, of course.

My thoughts are, I haven't seen them yet. I read the first book in Peace's series and was distinctly underwhelmed. It read like phony James Ellroy that was actually written by Ellroy -- Peace's usurping of Ellroy's style was astonishingly, and annoyingly, complete.

So that kind of cooled me on the whole endeavor, although I do have vague plans to pick up the thread at some point.

three months ago i have problem which is popular of many of us ! what shall do and how to go on living, I can not understand ((I have stopped smiling at ALL!!!! :( yes!!,i have bad looking teeth because of heredity ... why me? Teeth is the first thing you see when talk anybody,or doing smth like that, I have found a solution in putting lumineers ! and i can say it has guaranteed 100% result,i will advice that its a good decision