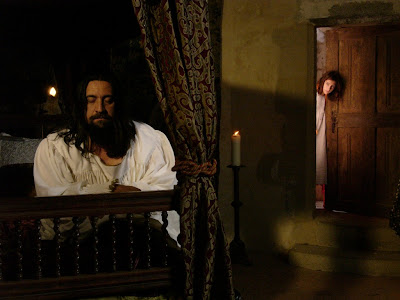 In a fascinating interview, conducted by Glenn Kenny, on the topic of her film Bluebeard, Catherine Breillat says, partly in reference to the enormous disparity in size between her lead actors:
.
The film is also a tale about the superiority...of the grace...of young women over the power of colossal men.
.
Well, sure it is -- in Breillat's version of Charles Perrault's 17th century fairy tale, Bluebeard (the extraordinary, in pretty much all cinematic senses of the word, Dominique Thomas) is, indeed, massive. I don't know the man's physical dimensions, but next to his most common screen partner here, the whispy Lola Créton as Marie-Catherine, Bluebeard's child bride, Thomas appears to be about 9'4", 582 pounds. And yet Bluebeard, the monster of folklore, who is no less monstrous in this film (yet also strangely, and intriguingly, gentle), is utterly defeated by her, bowing to her every whim, which include putting off sexual intercourse until she's some few years older, as well as giving her the opportunity -- and I'm going to be cagey here -- to tie up some loose ends, at a time when it would really be in Bluebeard's best interest to finally learn to say "No!"
.
However, I think a key word in that Breillat quote above is "also", because her film is as primal, mysterious, simple, and bizarre as the best fairy tales always are. The basic story -- a young woman from a newly poor family is married off to Lord Bluebeard, a huge and powerful man who, it is rumored, habitually marries and then murders women -- can easily be read as a class-tinged showdown between good and evil, which it is. But Breillat contrasts the fairy tale with other scenes, set in the 20th century, of two young girls exploring their home's attic, and eventually settling in to read Perrault's story. The decision to read it is made by Catherine (Marilou Lopes-Benites), against the wishes of her older sister, Marie-Anne (Lola Giovannetti). Marie-Anne says the story scares her, and that she's too sensitive to the violence, but Catherine is hilariously, and eventually a bit uncomfortably, gleeful about the story's luridness, and she seems to practically know it by heart.
.
These scenes of the two young sisters weave into the fairy tale bulk of Breillat's film, not just because it offers a sort of meta-fictional commentary (the young girls are named Marie-Anne and Catherine; Bluebeard's bride is Marie-Catherine, and her own sister is name Anne, played byDaphné Baiwir) on our own distance from a tale as well-known as Perrault's is, but also by simultaneously depicting how the "reader" can get lost in what they know full well is fiction.
.
This last idea is executed towards the end, at a time when the real darkness of Bluebeard has begun to kick in, and when Breillat has amped up her own brand of strangeness. What the sequence achieves (and notice how I'm taking such great pains to not describe it, but if you know anything about Bluebeard's hook, you might guess what this scene involves) is not just a folding together of Breillat's two threads, but foreshadows her alarming climax, and its hints of subconscious, sociopathic violence that can be tucked away inside, well, who knows who. Anybody.
.
But I don't want to go too far with all the above mumbo-jumbo, because Bluebeard is, ultimately, a rich, moody bit of strangeness that shouldn't be explained too cleanly or too readily. At its strongest, it achieves the primal, narrative grip of the Perraults and the Grimms and the Andersens of centuries ago.

The Collection Project Film of the Day:
. 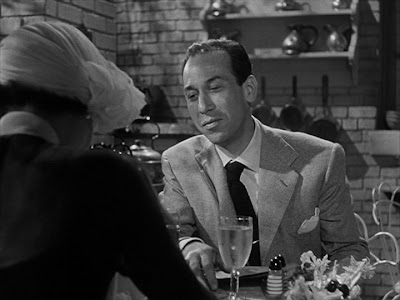 I'm going to cheat again (I said I was going to do this from time to time) and simply link to an old post, one about a film that is also about a powerful man, whose powers, nevertheless, fall shorter than he'd like when applied to a supposedly defenseless woman -- it's Otto Preminger's divisive (check out the comments!) Whirlpool. Here's an excerpt! To entice you!
.
But this film is a bit more than the above. There is a dark sexuality to Whirlpool that, while fairly plain to see, is not actually dealt with as part of the narrative, making the whole thing all the more interesting. When Korvo initially takes Ann out for dinner, he makes a self-deprecating reference to his own less-than-pleasing physical appearance. Later, at the cocktail party, Korvo takes Ann into an empty room and hypnotizes her, with her permission. While hypnotized, Korvo is able to get Ann to perform a couple of innocuous tasks before having her take a seat, holding out his hand to her, and saying, "Take my hand, Ann." But, even hypnotized, she won't do it, and a cloud of shame and anger and disgust passes over Ferrer's face that indicates both the limits of his hypnotic abilities, and what he'd do if those abilities were stronger. An amoral man who believes himself to be ugly will do just about anything to be with a woman as beautiful as Gene Tierney.
Posted by bill r. at 4:51 PM

By the way, I'd really like to see this and since no one has said that yet, I thought I would. Your review has put it back in my mind as something to put on the "to view" list.

I guess I'm not important enough anymore to get responses to my comments. I guess you're too high on yourself now to think you need to engage an old blogging buddy like me in conversation. Jerk.

What am I waiting for?

You're waiting for me to punch my FIST into your FACE!!!

Wait for you to punch your girly little fist into my manly face? Sounds boring.

More like my AWESOME fist into your STUPID face!