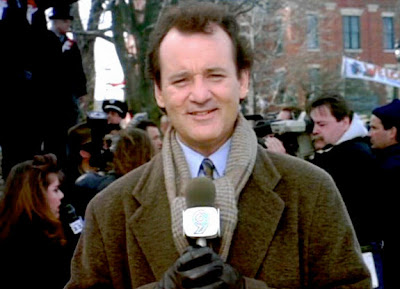 The Collection Project Film of the Day:
.
One form of comedy I don't particularly care for is the kind that features a central character that is not only a smart-ass, but a charming one that eventually, in one way or another, wins out in the end. My basic disdain for this sort of thing at least partially explains my ambivalence towards such Chevy Chase vehicles as Fletch and Caddyshack. The latter film is, I think, particularly overrated, and I would say it's no accident that I believe the funniest person in the whole thing, by a wide margin, is Ted Knight.
.
I think this kind of comedy tends to flatter its audience. The jibes and one-liners offered up by our central wiseass often go unnoticed as such by those around him, but since we laugh, that means we have one up on everybody. To go too far into this would inevitably lead me to explain the kind of comedy that I prefer -- which I guess would be the kind that doesn't do this -- and might even send me careening into the pit of Comedy Theory, which, I think we can all agree, is a screeching nightmare. So I won't do that. But I will boil this all down by pointing out something I've noticed, and something that is the heart of this kind of smart-ass comedy, which is: funny lines that are written to be spoken by someone who believes what they're saying is funny, are rarely funny. Meanwhile, lines that are written to be funny, but are spoken by someone who doesn't realize what they're saying, have a better shot at making it. Why this should be, I couldn't exactly say, although I would think a certain self-consciousness must play a big part. Whatever the case, if you don't find yourself agreeing with me, think back on some favorite comedies, and favorite lines, and do an informal tally. Perhaps I will be proven correct in your eyes. Perhaps I won't.
.
As with anything, there are exceptions -- Groucho, for instance. And, of course, Bill Murray. How Murray manages to skip over this pitfall is a little hard to pin down, though I would say at his best he's able to do one kind of joke while seeming to do another. Take this line from Quick Change, which Murray co-directed with Howard Franklin. Murray, as a bank robber named Grimm, has just changed out of his clown costume, in which he robbed the bank, and into a more pedestrian outfit, so that he can more easily blend in as a hostage. In describing his ordeal to the cops, he says:
.
This is what the animal said to us! He says to Ms. Cochran here: "Baby! Up your butt with a coconut!" And I think he was prepared to do it! Except I saw no coconut. He had no coconut, to my knowledge.
.
On one level, Grimm is fully aware that what he's saying is absurd, but he has to deliver it sincerely. It's a neat trick. Of course, Murray's genius doesn't always come through this kind of prism, and he obviously has often gone the straight wiseass route (see Ghostbusters). But usually, when Murray is firing on all cylinders, he's playing a wiseass, yes, but he's playing a wiseass who's an asshole. This muddying of our rooting interest can work wonders.
.
The clearest, and best, case in point is Groundhog Day (d. Harold Ramis). Here, Murray plays Phil Connor, who travels a long road from self-centered prick to sympathetic and empathetic nice guy, by way of reliving the same day, over and over and over again, for God knows how long. Early on, Connor is a funny wiseass, but part of what's funny about him is how obnoxious he is. Seeing prickishness at its most untethered can be quite the hoot, but there's no buffering layer of superiority over everybody, because we're still laughing at him. Even when he's being funny on purpose, at one level he's still the joke. And later, as Murray tries to achieve something, anything, worthwhile in his Moebius strip of a life, he begins to founder, and he's funny in a completely different way. If comic heroes -- the kind grounded in some form of reality -- succeed when the audience can laugh at some sort of universality, something they can recognize, then Phil Connor, and Groundhog Day's fantasy narrative, manage it, while Fletch, and Fletch, do not.
.
Groundhog Day even has the kind of multi-layered joke I mentioned from Quick Change, the best being Murray's under-his-breath delivery of the line "Amen", after he's just silently said a prayer for world peace before drinking with Andie MacDowell's Rita, the woman he's trying to woo by pretending to be a better person than he is. That "Amen" never fails to make me laugh, and that one word, and Murray's performance, contains at least two jokes, or at any rate two funny things.
.
And I haven't even mentioned Murray's sometimes astonishing work as an elder statesman and occasional dramatic actor (which is there in Groundhog Day anyway, and any number of other early films), nor have I brought up Ramis's The Ice Harvest, and why I think it functions as a thematic flip on Groundhog Day. For another time, then!
Posted by bill r. at 7:39 PM

GROUNDHOG DAY is one of the rare examples of a movie I can watch pretty much continuously. Any time I see it on tv, I always end up watching at least some of it. Murray is so funny, but like you mentioned, he also effortlessly blends in excellent dramatic acting, as well. Speaking of, I'm always blown away by the interaction between Murray and Scarlett Johansson in LOST IN TRANSLATION.

He's great in TRANSLATION, Paul, but if you haven't already I urge you to see BROKEN FLOWERS. It's a divisive movie -- surprisingly so -- but I think Murray is really, really terrific. That movie never caught fire with anyone, really, but it deserved to.

Weirdly, I usually enjoy wiseass comedy, but Groucho is the exception! Watching Marx Brothers movies now, I appreciate Harpo, enjoy Chico, and think Margot Dumont is an unsung comic genius, but I keep wanting someone to burst Groucho's smug superiority with a baseball bat.

Interestingly, this is a contrast I used to make between Family Guy and South Park, back when the former was good and the latter was sucking (approximately 2004-2005). In South Park, our hero Stan is the smart one, and every else in town is an idiot; in Family Guy, our hero is an idiot and everyone around him is relatively smart. I thought this was key to South Park's air of irritating self-congratulation, and Family Guy's relatively generous spirit. Only then, Family Guy shot downhill, and my theory was rendered useless. As theories so often are.

I do not understand not liking Groucho. Even with my aversion to wiseass comedy, I don't get it. To each his own, and all that, I guess.

As for SOUTH PARK and FAMILY GUY, maybe the problem is that I never watched FAMILY GUY in its original run, but only since it's come back, and I despise it. Which isn't to say I've never laughed at it -- they throw out enough jokes that a few are bound to land -- but by and large I find it utterly hateful. SOUTH PARK, meanwhile, I'm a big fan of, though I can acknowledge that its best years are probably behind it. It can be smug, but I'd be lying if I said that, since I agree with their point of view more often than not, I'm not as bothered by it.

What gets me about Groucho, I think, is the total lack of generosity with other actors, the inability to stop mugging at the camera---it just sucks all the air out of the room. He's not just bullying his co-stars, he's bullying the audience, demanding we both laugh and that we share his contempt for all the squares around him. I mean, I like the actual jokes he tells, but his smugness and face-pulling just kills the movies for me. I actually saw a stage revival of The Coconuts, which I liked much better than the original movie, as Groucho's preening had been neatly removed from the equation.

FAMILY GUY was great for Seasons 2, 3, and 4 (the two before it was canceled, and the one after it returned). I mean, really great---neo-vaudeville pacing, truly inventive timing, just great. Then McFarlane's attention got split by too many projects, and it plummeted downhill. Part of the problem is that because it's entirely gag-based, rather than character-based, any drop-off in gag quality means there's nothing to fall back on. As for South Park, I regard it as ruined by Reason Magazine---by inviting them to speak at so many political conferences, it convinced them that people were there for the thinking. Stan's "I learned something today" monologues stopped being jokes, and became serious explications of their fairly shallow dorm-room libertarianism (the whole goo-backs episode, I kept thinking, 'Guys, this is not the insurmountable conundrum you seem to think it is; it's just why we have minimum wage laws.'") Interestingly, the Bush years seem to have taken some of the wind out of their political sails, and accordingly improved the show by making them focus on the characters and the jokes, rather than plumping for their policy positions at every turn.