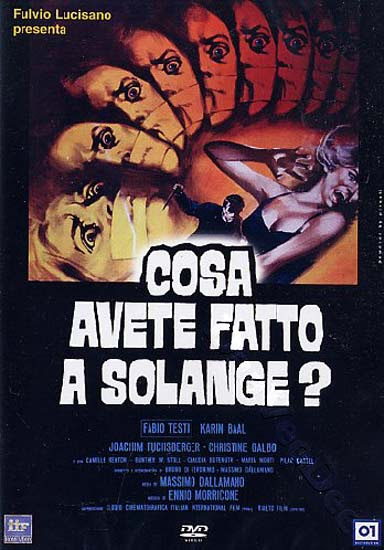 I am not, I don't think, a horror fan like some other people are horror fans. I don't say that out of a sense of superiority or elitism, but rather out of a genuine belief that my perception of the genre is significantly different from that of the majority. I've long felt this, but in the past I took the attitude that most of the people who either worked in the genre or were fans of it were losing their way, and they were dragging horror along with them, while people like myself clung desperately and hopeless to it by one shoelace, hoping that, somehow, through the overwhelming strength of my disapproval, I could drag the genre back where I wanted it to be. All of which I realize sounds pretty arrogant, because who am I to tell anyone else what any one genre should or shouldn't be? That's not my place -- though I have gone on at length about what I like and don't like about horror -- but one can hope, right? Well, my days of hoping are over, because nothing's going to change. I'm not angry or disappointed that the infidels have won, either. I really think that I've been fooling myself all these years by pigeonholing the genre, and fighting -- well, complaining, really -- against a tide that predated my birth by several decades.

I came to this understanding while watching a movie I didn't much like -- which sort of follows, doesn't it? -- but which, to my knowledge, is not particuarly beloved by anyone: What Have You Done to Solange?, a film which is not only not very good, but also isn't even really a horror film. It's a suspense/mystery film, though it also falls under the very broad Italian giallo category, which encompasses films like this, but also horror, making the definition fairly vague. That's neither here nor there, and another thing that is neither here nor there is What Have You Done to Solange? itself, or its proper genre designation. What matters is that, while watching it, I thought about the fact that I don't much care for Italian horror films. There are exceptions -- while I may not adore Mario Bava's films like some do, I can certainly understand the appeal -- but by and large there is always a camp element and primary-color visual style to these films that pushes me right out the door. In my view, much of it is just plain clumsy -- the last few Argento films are almost models of incompetence, and in Solange, which as I said is primarily a murder mystery, the killer isn't even introduced as a character until the last twenty minutes -- with patches of visual bravado that nevertheless fail to carry me through the rest of it. How many self-proclaimed horror fans will admit to not much caring for Italian horror films? That's like saying you don't like Hammer films, or Val Lewton. And as a result of not being a fan of that subgenre, I don't often go out of my way to watch those films, which is not only cutting myself off from a great many films that are an important part of a genre I claim to love, but it also distances me from many of the films that have followed Italian horror's heyday, as the influence of those films on modern horror is going to be felt much more strongly than the influence of my beloved Hammer or Lewton, which at this point has been all but erased.
I'm very much in danger of repeating things I've said over and over again on this blog, so maybe I should cut this short. I'm just continually struck by my own lack of connection to horror, and certain important movements, for lack of a better word, within the genre. Italian horror, political horror, horror as satire (which is often claimed as an element after the fact). What I don't like about horror is an easy list to make; what I want from horror is harder to describe, though I suppose I come closest (-ish?) here and here. I want writers and filmmakers to look more squarely at what we're all scared of, and why we're scared of it, and why maybe we shouldn't be, if that's their angle (an often unexplored one). What we're afraid of at our core. Though I don't quite know why I would want this, I want something I can't shake off, and not because I saw a lot of entrails and brain matter. I want mortal dread.
_________________________________________________
UPDATE: Sort of. Anyway, what a mess this post is. Never write something that you haven't fully thought out when you know you're going to be interrupted a lot. But I'll let it stand as a testament to the fact that they can't all be winners.
Posted by bill r. at 8:33 AM

Labels: Horror, What Have You Done to Solange?

I don't say that out of a sense of superiority or elitism ...

That's where you and I differ. Almost everything I say comes from a sense of superiority and elitism. How else am I going to keep Ryan in his place?

As to horror, I'm not only with you but I've been there for years with Science Fiction, my favorite genre (and as I've explained before in other places, I exclude drama and comedy from claims of favorite genre since "favorite genre" should be a subset of those two primary methods of storytelling anyway). But anyway, science fiction I love and I swear most people don't get it anymore and actually seem to like lots of crap that they shouldn't be liking.

I feel the same as you do about horror. I've seen horror I've liked in the last twenty years, certainly, but most of it goes about things the wrong way and frankly, there are a couple of movies highly praised by the horror blogging literati that I consider garbage so I keep my mouth shut. Eh, what are you going to do?

"What are you gonna do" was actually sort of the point of this post, wasn't it? I should have just said that.

And SF gets jacked up way more that horror does, probably, but so few SF films are made anymore, it's harder to notice.

My taste in horror is pretty much stuck back in the 50s. I love me a good gritty b&w horror piece like Return of Dracula, but I find it hard to work up much enthusiasm for newer horror (other than, maybe, Cronenberg's early films, if those can be called horror).

Unfortunately, a post like this attracts discussion amongst some of those very people so I'd rather not get into it personally. It's not that I don't like the two movies I'm thinking of, it's that one in particular I find to be utter garbage. GARBAGE. As in one of the worst things I've seen in years and bloggers who I am friends with and frequent commenters at CS have publicly expressed how wonderful it is which just makes my jaw drop.

Greg's such a coward. He's scared of the literati. Everyone knows that bloggers are wimpy nerds, Greg, no one's gonna beat you up.

Greg, send me an e-mail then. I'm too curious to let it go now.

Ed - Early Cronenberg is definitely horror, but of the highly indiosyncratic variety that you just never see anymore. To be fair, you hardly ever saw it before, but more Cronenbergs in the world would be nice.

Yea, Cronenberg is a rare talent in every sense.

And Greg I'm very curious too, I'd like to know what these garbagey but widely beloved films are...

But what if you like it? See, that's the thing, it's not that I'm scared despite what that hateful vessel of hateful hate, Ed Howard, thinks. It's that I'll get bombarded with why I'm wrong and how I'm just not seeing it and brother, sometimes you just don't feel like hearing it. You know?

Oh, I won't do that. Listen, I probably didn't like it that much. Even if I do like it, it's unlikely that I'm over the moon about it. I just want to know the titles. Send me the e-mail, and if I like the movies, I'll just respond with "I see. Good day to you." And then never speak to you again.

Seriously, they're just movies. We've disagreed a million times before. Just tell me the titles!

Yeah, seriously, I mean Bill nearly killed me last week for not liking a movie he liked, but I managed to survive. Barely, but still. What's a weekend spent in the trauma unit? The doctors say I'll be able to walk again in just another month.

So what's the worst we could do to you? Just send us the e-mail. Chances are good I haven't even seen these movies.

Greg - I've now read you're e-mail, and have responded.

Oh well, at least I think I explained my reasons well enough. Now then, let's never speak of it again.

Yeah, as I said in my response, it's no big deal. I like the movies, but I don't worship them or anything, and your points are fair. But I also checked the blog/comment thread you mentioned in your e-mail, and a lot of the people who liked the film make good points in favor. But I can't get specific, because you're too a-scared.

Some of them do, I agree, though I stand by my feelings on it. And I just don't want to get into it publicly that's all. Sometimes you just grow tired of that.

Sometimes you just grow tired of that...

This is true. I've held back many times, for the same reason. But you had to know I'd be curious about which movies you were talking about. And even though I like the movies, I'm actually a little disappointed that you didn't hate two more interesting films. Shame on you.

Jesus, you guys are weird.

I'm not really a horror fan (i.e., I don't like them more than other genres), but I can say that the Italian horror I've seen -- admittedly not much -- I didn't particularly care for. And that includes Suspiria.

I didn't like Suspiria either, Rick, though I haven't seen it since I was a kid. I just don't like the style of most Italian horror. But I do like Bava. Don't love him, but I like him. He tended to get more interesting casts lined up, for one thing.

Greg - I've now read you're e-mail, and have responded.Someone forward this to me! I need to know!

Bill - No e-mail forwarding okay. Arbo can e-mail me directly if he wants to know. Thank you.

I was just pretending that I never saw Arbo's comment.