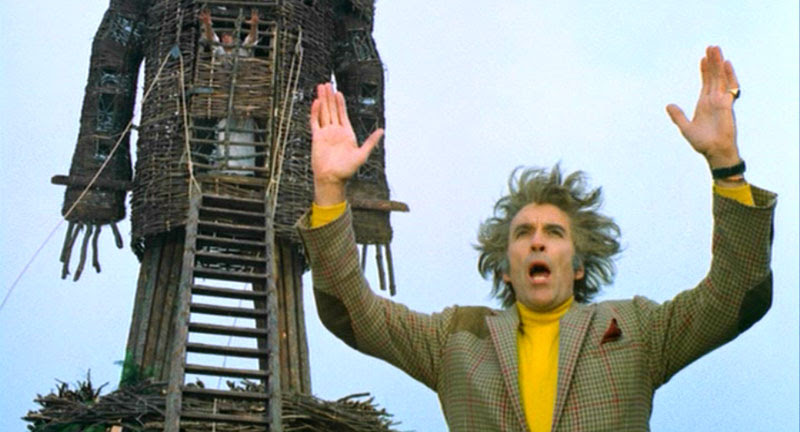 Like Lord Summerisle (pictured above), I sure could go for a nice juicy apple right about now. But guess what? I went to the market earlier today, with the apple basket I personally hand-wove, and guess what the creepy old apple lady says to me? "No apples today, young man. The crops have failed."

"In Summerisle?" I said. "But that's just stupid, you old lady! We got apples coming out of our asses around here! What do you mean, the crops failed! You're a moron! A stupid old moron!"

Well, it turns out she was right, and my barrage of insults was, more than likely, unfair. The crops have failed, and now we have no apples to satisfy our hunger or thirst, or to dry out and use as decorations. I was talking to a guy at work about it, and he said, "Yeah, it's really awful. No apples at all. You know what I had for breakfast? A pear. That's what I've been reduced to."

I said, "I'm not sure I can stand it much longer, to be honest. It's been hours since I had a real apple."

Then he said, "Do you know any virgins?"

He said, "Do you know any virgins?"

"Why?" I asked. I thought he'd gone mad from the lack of apples.

"Burn one," he said, looking at me like I had apples growing out of my eyes. "In the wicker man. As a sacrifice?"

"The...to the, I don't know, the frickin' apple gods, or whatever! I don't know, man! That's just what we do around here. It's supposed to work, seriously."

"Damn it," he said. "Well, that's what we get for living like a bunch of pagan hippies. People like us get started pretty early."

And that's where we left it. No apples. Unbelievable!
Posted by bill r. at 1:20 PM

I do like apples, but I can't have any, because the crops have failed! Jesus, can't you read? Or are you just mocking me?

You guys just aren't creative enough. Don't you have babies on your island? Babies are virgins. One hopes, anyway.

You can thank me when the apples start growing again.

Babies...you know, that's not a bad idea. It hadn't occurred to me, because you don't look at a baby and think, "I wonder if that baby's a virgin." One just assumes.

Time to go to the attic and dig out my hand-woven baby-stealing basket!

Anyway, even though it turned out there aren't any apples the old lady's still a moron. Last week I went to her and was like, "Yeah, plantain please."

Guess what? She hands me a banana. A banana! Oh Lordy.

So anyway, I'm like, "That's a banana," and she says, "Banana, plantain, same difference."

That's when I exploded. "No dumbass, it's not the same difference," I yelled in her face, "They are completely different you stupid shitsack!"

So she was like, "I say they're the same," and I was like, that's it, I'm going to use that ancient curse my mysterious Eastern European grandmother taught me and I said, "May all your apple crops fail from this day forward!"

That showed her! Yeah, man, that curse of mine really... oh, wait a minute. Oh shit man sorry. I'll work on a reversal curse ASAP.

You know what? It's okay. That old lady causes more trouble than I don't know what. Plus, if your reversal spell works, that'll save us a baby.

Just a thought: Someone, somewhere, thinks that the Nic Cage Wicker Man remake is "soooooo much better" than the original.

I'm sure that must be true, Krauthammer, but whoever they are, they're keeping mighty quiet about it. As they should.

The old lady at the fruit stand is a virgin, by the way. Or so I heard.

But old man Grundy can be a teller of tall tales from time to time.

Old Man Grundy -- and I probably shouldn't say this -- is a bit of a pill. He thinks he's the only real pagan on the island. He's always saying things like, "Well, that's not how I learned to worship the sun and plants! You all are barely even chanting!"

He does throw a mean Naked Lady Folk Singing Nite, however.

The old lady is NOT a virgin. Old Man Grundy hid under her skirts one day and that's all she wrote. But did it have to be a human virgin? I know animal rights and everything, but hell, this is serious! Remember, an apple a day keeps Michael at Bay.

And how was your weekend?