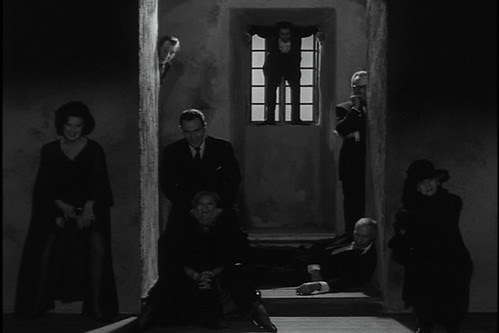 Presented as part of a countdown to the TOERIFC discussion of The Serpent's Egg (April 20, 10:00 AM EST, right here on this blog), which this image is not from.
Posted by bill r. at 1:55 PM

I'm the guy in the window.

Fox, I'm afraid you might be the chick on the far right.

Greg, I hid a picture of you in that window, like you're always hiding yourself in your banners. Good eye!

That movie creeps the hell out of me. Fox has got to be the guy who walks up the wall during that one scene.

Shit, I meant that Fox was the chick on the far left. That probably goes without saying, though. I mean, look where her hand is.

It's a highly disturbing movie, Ed. I don't know if Bergman thought of it as a horror movie when he made it, but that's what it is. So bizarre and unnerving.