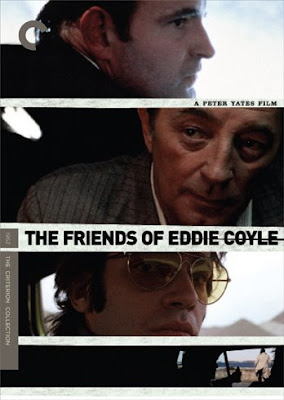 Finally, Peter Yates's adaptation of George V. Higgins's masterful crime novel The Friends of Eddie Coyle is coming out on DVD. This thing has been in some sort of loony-bird home video purgatory ever since there was such a thing as home video, but I've come to learn that you can count on Criterion to untie all those knots for us, and they've come through yet again.

It's been more than a few years since I read Higgins's novel, but I still remember parts of it vividly, and how the spare prose and uncommonly on-target dialogue made me think that Higgins had to be describing what the world of low-level, half-assed garbage criminals was really like (and maybe he was, and maybe he wasn't, but Higgins was an attorney general and mob prosecutor before becoming a writer). And the film is just as good. Apparently, as someone who has seen Yates's movie, I'm a member of a pretty elite club. I caught it (with commercials and apparently edited for content, although I don't think there's much content to be edited out) a long time ago on Bravo, back before that channel chose to switch focus from airing old movies and instead run shows about what life is like up there on those fashion runways you're always seeing on TV. Yates got everything right, and the casting of Robert Mitchum and Peter Boyle in the leads is so perfect as to be inevitable.

This will be released on May 19. Seek it out. And read the book while you're waiting for the DVD. I mean, what the hell, right?
Posted by bill r. at 4:39 PM

And into the Netflix queue it will go. Thanks for the heads-up-- this sounds really good. And while Yates' career runs the gamut from brilliant (BULLITT) to charming (THE HOT ROCK, YEAR OF THE COMET) to the downright "huh??" (AN INNOCENT MAN), I will always have tremendous affection for him because of BREAKING AWAY. I went to school at IU, and that film was practically required viewing. Which it should be-- it uses its locations so well, has excellent performances, and is one the least-condescending looks at small town life and class tensions I can think of in recent American cinema.

I keep forgetting that Yates made Breaking Away. He had a pretty good run there for a while, didn't he? Why doesn't he get more credit? I wonder if the release of The Friends of Eddie Coyle will boost his rep a bit.

The Friends of Eddie Coyle is, to me, the perfect detective novel--spare, real, cracking-good writing. It seems that I saw this a long time ago on TV, but who remembers now. I'll surely rent it now.

As a teenager, I remember, I had this paperback history of gangster movies, and the author compated "The Friends of Eddie Coyle" favorably to "The Godfather." I havent's seen it, but I'm intrigued. This one will be going into the Netflix queue.

It is a great book, Marilyn. Have you read any of Higgins's other novels?

Pat - The comparison to The Godfather is an odd one. They're really quite different films, in intent and style. But regardless, the Yates film is damn good, and I hope you like it.

No, Bill. It has been a long time since I read that type of fiction. In a way, Eddie Coyle ruined me. I couldn't see it being improved upon.

Marilyn, I've only read four of his books, and two are pretty much lost to my hazy memory, but you might want to check out his "Jerry Kennedy" series, which, along with crime, deal with political corruption and the practice of law in a very real and gimlet-eyed fashion (at least, the one I read did).