Leave Her Alone, You Bastard 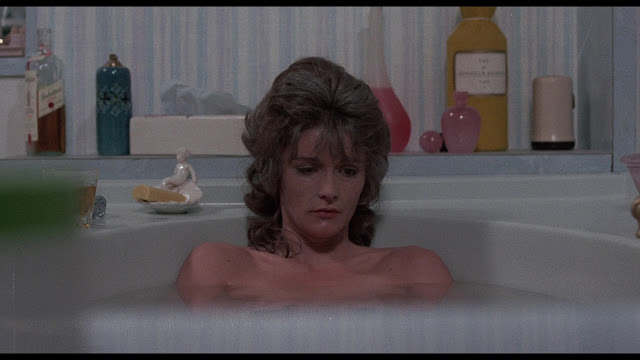 The Reincarnation of Peter Proud (d. J. Lee Thompson) -  I was talking to a friend about -- well, I'll just spoil things right off the bat, I guess -- how boring I thought this 1975 horror(?) classic(??) was, and he noted wryly that it must be missing director J. Lee Thompson's usual dynamism. Yes, I replied, where was the J. Lee Thompson I knew from Messenger of Death? And so on. The exchange was certainly more entertaining than any given sequence in this quite shockingly logy cult classic.

It's newly out on Blu-ray from Kino Lorber; the release coincides sadly with the recent death of Margot Kidder, who plays the film's mysterious possible villain, Marcia Curtis. We see her first, at the beginning of the film, killing a naked guy with an oar. This, we learn, is maybe a dream, or no, a flashback? anyway, something, which is being experienced by the titular Peter Proud (Michael Sarrazin). Peter rather too quickly comes to the conclusion that he is in fact the reincarnation of the dead naked guy, and when next we see Kidder, she is in the present day, wearing a wig that is sort of a little gray, and she has an adult daughter (Jennifer O'Neill) whose father, the unfolding and unengaging narrative reveals, was the dead naked guy. Therefore, she's also sorta kinda Peter Proud's daughter. Does knowing this inspire Peter to keep it in his pants? It does not.

So it's pretty sleazy, at least on paper. In actual practice, though, The Reincarnation of Peter Proud is an utter nap of a "supernatural thriller" (it absolutely does not read as horror, though that's how it's been categorized for the last 40-plus years; I'm going with the vague, milky, non-committal designation you encountered just before the parenthesis because the very weeniness of it is fitting) that can't even get excited by its own quasi-incest hook. This sort of bloodless sleaze is familiar to Thompson -- in Kinjite: Forbidden Subjects there's a scene where a guy is force-fed a wristwatch, and then Charles Bronson spends the rest of the film sitting in a parked car. Or so I remember, anyway. At any rate, it's a long way down from the original Cape Fear, I guess. 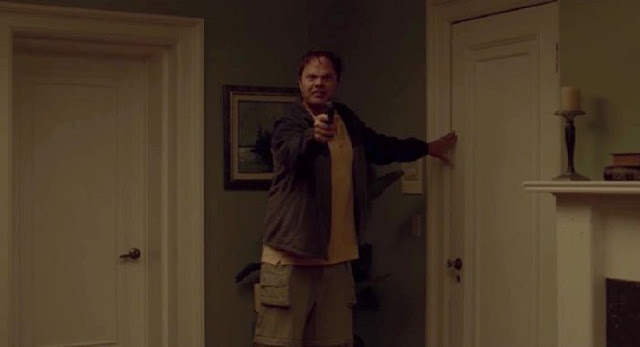 Shimmer Lake (d. Oren Uziel) - I wonder about movies like this one. How does a first-time director rope together a cast that includes Rainn Wilson, Ron Livingston, Rob Corddry, and John Michael Higgins? None of them are superstars, but all are "names," and all are successful, busy, and talented. Are Oren Uziel's screenwriting credits on such complete whiffs as 22 Jump Street and The Cloverfield Paradox enough to explain why he was able to put together this cast for his directing debut? I guess it must, but I suspect there are better filmmakers out there who were lucky enough to have written two shitty movies that got produced who would like to tell Uziel to fuck right off.

As it happens, Shimmer Lake (a Netflix Original, don't you know) is an obnoxious, pseudo-edgy dark crime etc., which for no good goddamn reason at all is told backwards. No effort was made to give each scene the illusion of flowing naturally in reverse, as Christopher Nolan did in Memento; instead, it becomes clear very quickly that when a main character dies, and then the film cuts to another character waking up, a new section of the film, the events of which occurred before the section we just saw, has begun. The only reason for any of this is so that when we get to the end, or beginning, we can say "Oh so that character was in on it too!" A thin reward, indeed, especially when you consider that thrillers have been managing that same thing while still telling their story rightways-round for ages. And it's thinner still when, by killing a character at the end of each section and introducing a new one at the beginning of the next, the "twist" that one of the characters is gay comes maybe ten minutes (at most) after we first meet the guy. So the twist I guess is more that, in this film, homosexuality exists.

Anyway. This film is about a bank robbery, and the title doesn't mean anything.