She Needed to Feed You [BEWARE: I PRETTY MUCH SPOIL EVERYTHING HERE]


I’m sure it’s happened dozens if not hundreds of times over the course of my life, but in these modern times which we all so lament having to live through, the first example I can remember of a horror film being advertised as – and even being critically blurbed as such – “the most frightening movie ever made” or “you will ever see” is, of all the things, the 2013 remake of The Evil Dead. “If you must aspire to be the next Alexandre Aja,” I believe our collective reaction to that one went, “please leave us out of it.” Just two years later, The Witch rode a similar wave of rhetoric, and while no film can live up to this sort of thing, that film was plenty all right by me. Not everyone agreed, though, and now look at us. Unfortunately, no one learns a damn thing in this world, and now Hereditary, the debut feature from writer/director Ari Aster has been pushed for months as the scariest movie you will see this year – a little bit more reasonable this time around – or, I saw one guy say, maybe ever. So much for reason.
That Hereditary can’t match the effusiveness of its marketing actually doesn’t have anything whatever to do with the film itself. These are just studio gimmicks – aided by “festival brain,” a condition which I’m pretty sure afflicts some critics – used to lure people into a movie that they’re probably not going to like. I think The Witch is a no-foolin’ great movie, but I’m not surprised that after seeing it many people left the theater frustrated. I suspect a similar fate will be met by Hereditary, but then again, who knows? This damn movie is such a kook-ball soup of the idiosyncratic and the obligatory, the striking and the enervating, that its fate could be just about anything.
The film begins with the funeral of Ellen Leigh. She was the mother of Annie Graham (Toni Collette), whose eulogy for her mother is perhaps a bit ambivalent. As are the emotions of Annie's husband Steve (Gabriel Byrne) and teenage son Peter (Alex Wolff). Reacting with a sadness that might be deemed more typical of the situation is the daughter of the family, young Charlie (Milly Shapiro), a withdrawn girl, who is older than she looks (at one point it's said she's thirteen, but she looks like she's maybe eight), and possessed of many strange habits and interests, including randomly clucking her tongue and creating odd, "outsider art"-like toys. Charlie worries what will happen to her when her mom dies, the fact of mortality having now been driven home for her, not least because she was her grandmother's favorite, and Annie says her dad and brother will take care of her. This seems like cold comfort to Charlie. Added to her bond with her grandmother is her apparent affinity to Annie, whose diorama-like artwork (including a massive one resembling her house and depicting her family and maybe her entire life in miniature, and which she is working on throughout the film) resembles in their obsessiveness Charlie's own drawings and hand-made toys. Meanwhile, apparently masking a deeper grief than she lets on, Annie begins attending grief counseling (under the guise of going to the movies by herself), where she lays out the various horrible tragedies of her mom's life, and how the mother that was left afterwards affected her, Annie. They're quite something, these tragedies, the theme shared by all being mental illness.
So one night, Peter, the son, gets invited to a party. Annie says to Peter, take Charlie. Charlie, who on this day is fresh from apparently seeing her grandmother's ghost surrounded by flames in the woods behind their house, doesn't want to go, but Annie, who has a tendency to be both brusque and slightly manic, insists. For some reason, Peter doesn't find this demand to be all that outrageous, though he also doesn't want to drag his sister along. But he does, and at this Wild Teen Party, Charlie eats a piece of cake that has nuts in it, and she's allergic so her throat starts to close up. Peter grabs her, throws her in the car, and speeds to the hospital. However, on the way, Charlie, just a kid and in a panic, and so unclear about what will and what won't help her breathe again, opens a car window to stick her head out for some fresh air. You know, like dogs do. Speaking of dogs, there's a dead one -- or some sort of dead animal anyway -- in the middle of the road, and Peter, himself in a panic, and speeding, swerves to avoid it. In doing so, he goes off the road, and there's a telephone pole, or anyway some sort of pole, and Charlie, hanging out the window, slams into it, and her head is ripped from her body. In screenwriting guides, this sort of thing is often referred to as "the end of Act One." 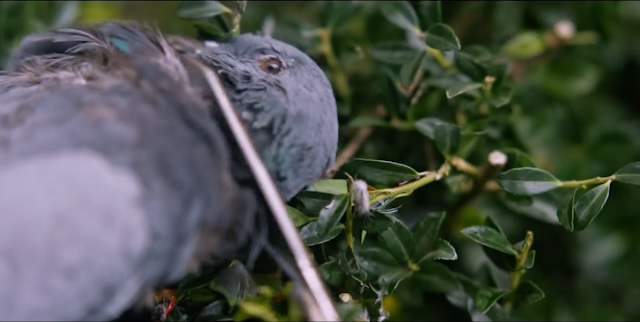 In fact, in terms of characters that matter, Steve has to come last. After Annie, Peter is really where it's at. As Peter, Alex Wolff is quite good. He goes through a lot in the film, giving a performance that at times seems like it must have been almost as exhausting as Collette's, and by the end Peter is as central to the plot and overall impact of the film as Annie. Not only is the history between mother and son fraught with near-violence, paranoia, and fear (Peter does not believe, says Annie, that she was merely sleepwalking the night she nearly burned them all alive), but it will come to pass that all these supernatural goings-on are as much about and for him as anyone. Which, as always, brings up more problems. So, what's going on is this: Annie's mom Ellen was a Satanist. Annie learns this by noticing that Joanie's apartment's welcome mat looks like the kind of welcome mat her mom used to knit. So after going "hey wait a second," she runs home and starts going through all the boxes of her late mom's stuff. There she finds suspiciously familiar welcome mats, photo albums featuring Ellen and Joanie smiling together at parties, and also huge number of books on the occult and Satanism. "I forgot all about these," Annie never says, but I imagine she must have thought at some point. In one of these books, a sentence about a Hell King or something craving a young male body is underlined ("I'd better underline this because it is very important," Ellen surely thought at the time). This all means that Joanie is no good at all, and the séance ritual she taught Annie is in fact rather more malignant than advertised. If the spirit Annie believed was Charlie is in fact Charlie (and there's evidence that it is), then Charlie's spirit has been corrupted, or maybe always was corrupt. In any case, now it's in Annie, and the sketchbook used to connect to Charlie now cannot be destroyed without destroying Annie. And Annie wants to hurt Peter, except she doesn't.
The last twenty minutes or so are pure horror. The slow-burning fuse has reached the dynamite, and Aster pours every horror idea he has or has borrowed into this stretch of the film. As with everything else in Hereditary, the good pulls the bad along by its hair. One the one hand, there is an image in this section of the movie that is sure to become famous, so effectively unsettling is it. Of course, the image as an image is not innovative. What makes it work is that Aster doesn't demand that you notice it, by which I mean, he doesn't hammer it with music. It's not accompanied by a sting of violins, or any other sound. You'll see it when you find it (and some will of course see it immediately; I didn't) but you won't be told it's there. That Aster displays a light touch when it comes to the score may be the single most refreshing thing about Hereditary.
I found later images even more disturbing, including a reappearance of Charlie's severed head which is quite frankly terrifying. What would make it even more terrifying is if Aster had never told us that this whole story is more or less a twist on Rosemary's Baby (making it, among other things, an even longer con than it already was). I can't help imagining how the last five minutes of the film would have played without any context at all, meaning, the context Annie picked up from those stupid goddamn occult books. As unusual, admirably so, as Hereditary sometimes is, those dumb fucking occult books are no different from the awful scene that gets reproduced in every rinky-dink wisp of a horror movie that comes out in March and October and includes at some point a medicine cabinet being closed to suddenly reveal a grinning wet Victorian in the mirror, which then makes double its modest budget, and then flits up above our heads and crumbles like ash as though it never had been -- that scene, as I say, where Jamey Sheridan or Stephen Tobolowsky or William Fichtner pop up as folklorists and tell the hero in their booklined office or over Skype "That sounds like you're being haunted by the Bothinang, a demon known to haunt Midlothian -- he needs to eat your wife to grow powerful enough to excrete terror" which we all hate but which we just sort of accept in movies whose titles are synonyms for "bad." Hereditary is supposed to be above that sort of thing. I thought it was, anyway, and was just a little bit stunned that it wasn't. The phrase "how could you" may have crossed my mind. None of which is to say the film isn't any good. It's just that, to quote my friend John Self, it's not many good. And since leaving the theater, I've wondered about it, and thought about what the audience is meant to think about the plot at the end of it all. I thought about the party that Peter is forced by Annie to take Charlie to. Why, I thought, would any parent think it's a good idea for her thirteen year-old daughter to accompany her seventeen year-old brother to such a thing? And then I thought oh, well, I guess this was all fated to happen. Because Annie is her mom's daughter, she's still under Ellen's control to some degree, though she's completely unaware of it. So Charlie had to go to the party so she could die (in fairness, probably from eating the peanuts, not the way it actually happens) so that what happens at the end can happen. But if that's the case, and the powers at work can manipulate entire lives to head in the directions they, the powers, choose, and end when they need them to end, then why even fucking bother? Why all this mousetrap shit? Just pick a day, shove everybody in a room, drop a brick on those that you need bricks to be dropped on, turn whatever spirits you need to be evil into evil spirits, shove them where you need them, and clock the fuck out. You could have saved me forty minutes, at least.
Posted by bill r. at 8:50 PM