You might be wondering why this post that you are now reading is not part two of my internationally celebrated List of Favorite Movies (With Commenary!). Well, don't worry, I promise that I'll get to that just as soon as I feel like it. In the meantime, I received a couple of Claude Chabrol-related screeners from the good people at Olive Films. Shortly after receiving these films, the Olive Blu-rays of which hit stores today, I watched them. And now my thoughts on each are presented, most humbly, to you. The World's Most Beautiful Swindlers (d. Various) - This film from 1964 probably wasn't the curiosity then, when art anthology films like Boccaccio '70 and Spirits of the Dead were somewhat common, than it is now. But curiosity or not, the binding premise is strong: five short films by five directors, each tackling supposedly true stories of fraud, confidence trickery, and the like, with each film set in a different country. For Japan, director Horimichi Horikawa tell the story of a young bar girl who hopes to either ingratiate herself with an elderly, wealthy songwriter who carries around a satchel of money, or find a way to just rob him, and finds the specific opportunity which finally presents itself to be a unique one; for Italy, Ugo Gregoretti creates a world of everyday crime and casual corruption in which a powerless man finds a way to make everthing that's wrong with his society work in his favor; for France, Claude Chabrol tells his version of probably the most famous story in here, the (true) one about the con artist who sold a rich dupe the Eiffel Tower; and finally, Jean-Luc Godard sets his film in Marrakech, and explores the economic and social morality inherent, to hear Godard tell it, in the work of a local and prolific counterfeiter, one who meets and is interviewed by an American journalist (Jean Seberg).

And in all honesty, I can't say that The World's Most Beautiful Swindlers especially grabbed me at any point. The best for me was Horikawa's effort (prior to this film, Horikawa, like Gregoretti, was completely unfamiliar to me), if only because his story had a pleasingly traditional structure and narrative propulsion. Gregoretti, on the other hand, commits the cardinal sin of trying to be funny while not being funny (at one point, he even goes so far as to employ a "sproing!" sound effect), although I must admit that his approach to the "swindle" concept is somewhat novel.

For the two Frenchman, I guess Chabrol comes out ahead because I remain, alas, almost completely allergic to Godard. I continue to try not to be, but then he layers what sounds like ambient mechanized human grunting over sections of his Marrakech story and once again my eyes begin to water and I sneeze a lot. Chabrol, meanwhile, is working in an uncharacteristically (well, not that uncharacteristically, I guess, as we'll see) comic mode. The pull of his film is the knowledge that somehow, and maybe not exactly like this, but somehow this actually happened. As I said, this story, which ends with a man being disabused of the notion that he somehow owns the Eiffel Tower, is the best known of all those told in The World's Most Beautiful Swindlers, and it's also the most bewildering. Otherwise, it's pretty sleight work coming from Chabrol.

But why did I only only describe four of the five promised short films? Because some time ago Roman Polanski, who directed a segment set in Amsterdam, asked that his film be removed from The World's Most Beautiful Swindlers, and it was. So a film that was originally close to two hours is now just over ninety minutes. Oh well. 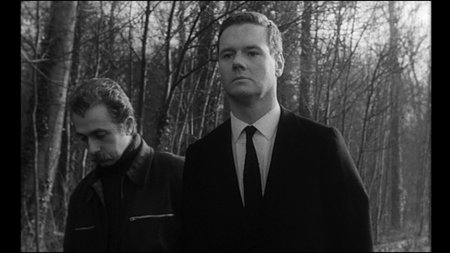 Ophelia (d. Claude Chabrol) - This one, on the other hand...It's always a joy when a filmmaker you believed yourself to be reasonably familiar with surprises you again. But of course Chabrol, who was so prolific that the chunk of his filmography I've crossed off my list probably wouldn't even qualify as a drop in the bucket, was a most surprising filmmake. Let's take, what the hell, let's take Ophelia as an example. One of two films Chabrol made in 1963 (the other, Landru, is unavailable in the US, and I desperately wish it was), Ophelia takes the interest in suspense and murder and let it lead him, naturally, to Shakespeare. Hamlet specifically. Except that Ophelia both is and isn't Hamlet.

The Shakespeare play being so well known, I hardly think I need bother with much in the way of a plot summary, but you should know the following: in Chabrol's film, the action is moved to then-present day France, but the Hamlet stand-in, Yvan (Andre Jocelyn) has returned home to his family's country estate following the death of his father, and his mother Claudia(!) (Alida Valli) has indeed taken up with his uncle (Claude Cerval). But from there, Ophelia reveals itself to be a movie in which the Shakespeare play exists, and it's a play of wich Yvan is only too aware. He begins to believe that the plot of the play is being carried out by his mother and uncle, at least the Claudius and Gertrude part is, and so in order to defeat them and exact justice he must follow Hamlet's actions. Instead of throwing his father's murder back in the face of the killers through an uncannily familiar play, Yvan chooses to make a short film. Which is a silent film, and a bit of slapstick...

So, like Hamlet, Ophelia is a story of madness, but, while Hamlet's psyche was breaking down, I hope it's not revealing too much to say that the slight sense of triumph an audience might take from his tragedy manages to elude Yvan. I won't say why that's the case, but Ophelia is, finally, a black comedy, and I think a mino masterpiece. Andre Jocelyn is pretty extraordinary in the way he underplays Yvan's madness so that he seems at times to be nothing more than a prick. But so was Hamlet, and so was Claudius (named Adrien here). And so was Polonius, here Andre (Robert Burnier) whose daughter is Lucie (Juliette Mayniel). Only Yvan calls her Ophelia, because he has to in order to get into character, as it wer. Since this is not actually Hamlet, this "Ophelia" isn't mad. She's the sane one, on the sidelines. Not mad, but just as powerless.
Posted by bill r. at 6:26 PM

Funny that, two years ago I got to see a print of the Swindlers with the Polanski contribution. I don't recall much of the narrative except that it was a very loose one but a handsome piece of film it was (I am kinder than most about that film, everyone else at our screening hated it).

wow, I love that movie