Recently I learned, I can't remember where, that HHhH, Laurent Binet's post-modern novel about the assassination of Nazi demon Reinhard Heydrich, had been made into a movie set for release later this year. Then tonight, I happened to be browsing IMDb, where I saw a sinister-looking poster for a film called Anthropoid. The poster appeared to suggest a Nazi theme, so I looked it up and it turns out it is also a film about the assassination of Heydrich. Further research revealed to me that the Czech plot to kill the SS-Obergruppenführer was called Operation Anthropoid, which was Binet's original choice for a title before his editor suggested the much more oblique HHhH.

I couldn't help thinking, of course, of all the times two films with strikingly similar premises are released in the same year, and close enough together that one couldn't have ripped off the other, and how often the two films are about very specific things. Take Capote and Infamous, for example, both of which focus on the period in Truman Capote's life when he researched and wrote In Cold Blood, as well as his relationship with killer Perry Smith. These similarities can also be a tad broader, but still surprising, as when two films about major Eastern-American cities being threatened by volcanic eruptions were released in 1997.

Still further research revealed that when Binet submitted HHhH (which stands for, in case you're curious, "Himmlers hirn heißt heydrich", which translates as "Himmler's brain is called Heydrich"), the manuscript included several pages in which Binet takes down Jonathan Littell's The Kindly Ones, a massive and controversial novel also about Nazi Germany. Binet's publisher made him remove that section, but subsequently the literary magazine The Millions was given permission to publish those pages. In his introduction to Binet's writing about Littell and The Kindly Ones, critic Garth Risk Hallberg writes this: 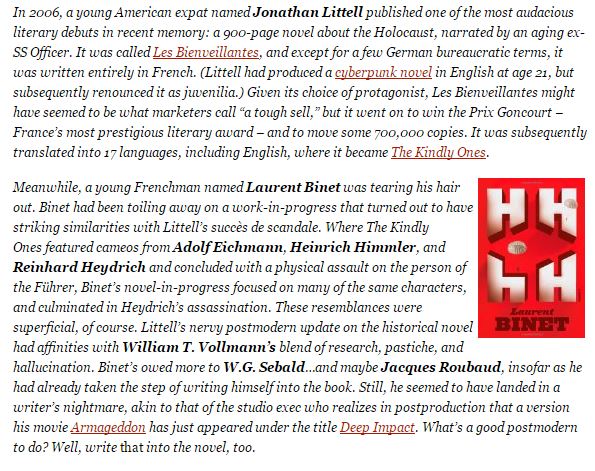