A Mouse Hasn't Exploded for More Than a Year 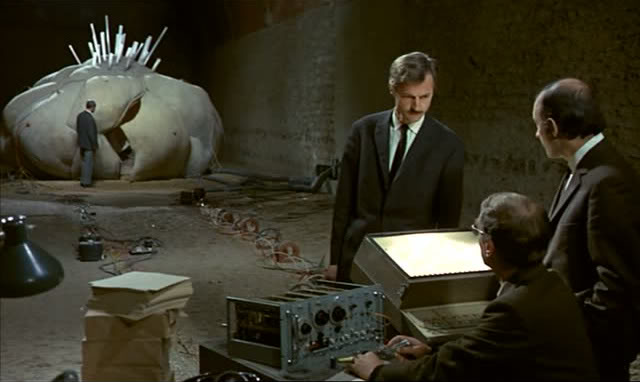 Before I say anything about the film which brings us here tonight, please permit me to launch into a rather dicey comparison. Just recently, I watched the new film by writer/director Sebastian Silva called Nasty Baby. Roughly speaking, it's the story of two gay men (Silva and Tunde Adebimpe) who live in Brooklyn and with their friend (Kristen Wiig) strive to create and raise a child. It's a decent sort of comedy-drama until things take quite a dark turn, at which point what does it become? From what I've seen of the reaction to Nasty Baby (you shouldn't consider what I've seen to necessarily be a representative sample, tough), critics have been mixed-to-negative, with most of the negative being due to that dark turn. According to Mike D'Angelo "[w]hat had been a light, cozy comedy...abruptly metamorphoses into a preposterous thriller, as a minor act of violence snowballs into behavior that qualifies as downright evil," and as if that weren't bad enough this move "neither emerges from the skeletal narrative nor thematically dovetails with with the other storylines in any way." First of all, I will concede that there is a light preposterousness in this section of Nasty Baby that needn't be there at all -- it has to do with two characters trying to be playfully tricky with another in a way I doubt they would have been. But you don't need that to get to the violence so I didn't care. Second, I think it's absolutely incorrect that the "thriller" (I wouldn't call it that myself) portion doesn't grow from the narrative. Silva is building towards something along these lines almost from the beginning. Regarding whether or not there's any thematic dovetailing going on here, I'd say well, no, maybe not, but I'm also at a complete loss as to why in the hell that should matter. While I don't claim that Nasty Baby is an immaculate depiction of real life (it's an unquestionably flawed movie, but it's an interesting one, and I liked it), it does strive towards a certain kind of realism, which I think it mostly reaches. And the things that eventually happen in the film do happen in real life, and they don't happen because themes, which don't exist in life, are doing any dovetailing.

I bring this up mainly to address the issue of genre, which to this day some people can't get their heads around. Or rather, they can't get their heads around the notion that genre isn't rigid but rather endlessly malleable, and that Nasty Baby can be both an amiable social comedy and, suddenly, a crime film. Because why not? What's preposterous about sudden violence? Similarly, I can't help but think about crime and horror and science fiction films (or novels) that aren't generally thought of us as such because those genres require adherence to some kind of formula -- I remember the great science fiction writer Theodore Sturgeon writing with open frustration that the science fiction of a "blatant dabbler" in the genre like Kingsley Amis gets a ton of ink while "nobody ever heard of a polished and thoughtful writer like Edgar Pangborn," or elsewhere similarly bemoaning the fact that critics go nuts for works like Dr. Strangelove and Flowers for Algernon without ever acknowledging that they're science fiction. Then there's Kurt Vonnegut, who in his short essay "Science Fiction" (found in his collection Wampeters, Foma & Granfaloons) seems to be on Sturgeon's side when he says "I have been a soreheaded occupant of a file drawer labeled 'science fiction'...and I would like out, particularly since so many serious critics mistake the drawer for a urinal," until you remember that he claims that critics told him in their reviews of Player Piano that he was a science fiction writer, adding "I didn't know that. I thought I was writing a novel about life..." Oh you did, did you. He goes on to damn the genre with faint praise, and writing within it over the course of his long career.

I mean, what's gotta happen? Does Alain Resnais have to make a science fiction film or something crazy like that? Well guess what, he did! As did Tarkovsky and Fassbinder and so on, but anyhow the Resnais film I'm specifically referring to is Je t'aime, je t'aime, from 1968, and newly released on Blu-ray and DVD by Kino Lorber. Hell, Resnais himself came close to making a film in collaboration with Stan Lee (exciting in theory, but when you read up on what Lee pitched...hoo boy), so Resnais, who passed away last year at the ripe age of 91, was by no means as removed from the world of popular genres as it is generally believed major American filmmakers of the era were. The subjects of Art vs. Genre and The Great Artist Deigning To Address Genre are complicated and are generally misunderstood, misrepresented, and simplified by critics and others, but the French have traditionally been better than most at boiling this shit down while never sneering at genre. Film noir is known as "film noir" because the French appreciated the art of those films better than we did at the time. So, anyhow, it's not a shock that Resnais made a straight up science fiction film, which is what Je t'aime, je t'aime unavoidably is.

But what's fascinating about Je t'aime, je t'aime as a genre film is...well, no. First of all the plot is this: Claude Rich stars as Claude Ridder. When we meet him, he has recently survived a suicide attempt and, for a variety of reasons, is deemed suitable to take part in an experiment run by a strange but evidently not nefarious team of scientists who have cracked the problem of time travel. Resnais and co-screenwriter Jacques Sternberg are correct to not spend a lot of time on how this is all supposed to work, outside of laying out the dangers, and the reasons why the scientists believe that Ridder, the first human (it's been mice up to this point) to travel back in time, will come out of it unscathed. The idea is that Ridder will go back in time for one minute and them come back, as the mice did. The problem is, the mice can't confirm that they traveled back in time. So.

So that's the idea behind Je t'aime, je t'aime. What happens though is something goes wrong, and Ridder begins bouncing around in time, unable to fully return to the present, reliving primarily the parts of his life that pertain to a disastrous (possibly murderous?) love affair with a woman named Catrine (Olga Georges-Picot), who absolutely destroyed him, or who he absolutely destroyed. That's up in the air. But significantly, Ridder has become "unstuck in time." That's the phrase Kurt Vonnegut used to describe what was happening to Billy Pilgrim, the hero of his novel Slaughterhouse-Five. That novel was published in 1969, a year after the release of Je t'aime, je t'aime. It would also not be unreasonable for the viewer of the Resnais film to think of Harold Ramis's Groundhog Day. As things first become untethered for Ridder, it appears that his doom will be to repeat one afternoon (a nice one at least, or so it appears anyway) over and over again. That movie, Groundhog Day I mean, came out in 1993. There's also Ken Grimwood's novel Replay, a straight science fiction novel about a man who gets caught in a Groundhog Day-esque time loop, which was published in 1986.

This is all a stew of genre and influence, or, more than likely, in some cases anyway, the absence of influence. Did Vonnegut see Je t'aime, je t'aime? Charles Shields's biography doesn't mention the Resnais film. And the tumble of genre that follows both of these "high art" pieces? I assume nothing, but there is a definite genre tradition at play here. Resnais even depicts the scientists as professional men and their lab as a work environment -- shades, as far as I'm concerned at least, of the kind of tie-and-rolled-up-shirtsleeves men working the problem in 50s SF novels like Clarke's Childhood's End (and perhaps you recall what that got them). However, like Vonnegut (though to my knowledge less pissy about it) and frankly like most good genre writers, Resnais, with Je t'aime, je t'aime, is both using the genre as a tool at the same time he is stylistically basking in it. The genius of Je t'aime, je t'aime, as a science fiction film, is that time travel is dramatized not through special effects as we now think of them, but rather as a feat of editing. Ridder's life (or rather, as Jonathan Rosenbaum points out in his essay included with the Kino Lorber disc, a very specific chunk of his life) is both itself and fuel for science fiction, and it is both of these things at once through the kind of aggressive film editing that the French New Wave, which Resnais helped invent, or introduce, or however you want to describe his or anyone's part in it, made...popular? Well, sort of, eventually, given the impact the New Wave had on late 60s Hollywood. Which applied -- the 60s, 70s Hollywood guys, I mean, you know who I'm talking about -- which applied those New Wave techniques to, among other things, genre films. When the lunatics finally actually did take over the asylum, they often chose to subvert (I use that word for the sake of expediency and somewhat under duress, but that is a matter for another time) the kind of genre work on which Hollywood built its name. Take Bonnie and Clyde (please) or...except Bonnie and Clyde came out a year before Je t'aime, je t'aime...

So maybe it all really is Godard and Breathless. Maybe there really are just four or five films that have shaped everything. Maybe Je t'aime, je t'aime, which in my view is considerably better than Bonnie and Clyde, is nevertheless a product of that Arthur Penn film. Whether Resnais knew it or not. Though if it was, I bet Resnais knew it. Then again, who cares? Finally? In the Resnais film, Claude Rich as Claude Ridder enters this soft organ-like chamber because he has nothing to lose and, finally, he loses his mind. He ended up there through a confluence of genre and stylistic motivations. It's a moving ending, but it points to something about art, and what high art and so-called "low" art (fuck that idea, but anyway) have in common. People are nothing. Invention, in whatever form, is all. So it goes.

This has been a positive review of Alain Resnais's Je t'aime, je t'aime.

I think a large part of Vonnegut's "pissy" stance on genre was in regard to the marketplace. "Serious" novels were published in hardcover and got reviewed in "important" publications and made the author some moulah as opposed to having your work in drug store paperback racks. I always took his attitude to be less about his own snobbery and more about money and how external opinions of the genre would affect how much of it he would make.
Which doesn't mean he was right to slight the genre, but you know...[insert graphic of dancing pigeon]