What Can You Expect From a Woman Whose Mother Was Hanged? 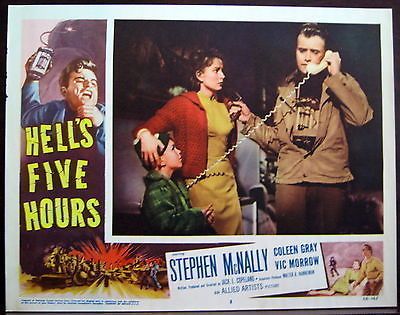 Hell's Five Hours (d. Jack L. Copeland) - This is one of the more curious super-low-budget noirs I've seen. The only feature made by writer/director/producer Jack L. Copeland, whose long life was otherwise spent as a war photographer and maker of short documentaries and training films, Hell's Five Hours begins with an ominous prologue about the then-new age of rockets, and warning about the dangers of rocket fuel, especially, it then become less a sermon than an imperfect but  intense crime drama about a man whose mind has snapped.

That man is named Nash, and he's played by Vic Morrow. Before the film begins, he's been fired from his job at the rocket-fuel plant by bully named Fife (Robert Foulk). He plans, then, to blow up the plant, something we're led to believe is a cinch to pull off. Along the way, he kidnaps Nancy Brand (Colleen Gray), the wife of plant manager Mike Brand (Stephen McNally). Mike's our hero, and with the cops he works to bring an end to this horror (which is sure to end, one way or another, within five hours, for plot reasons that seemed sensible enough to me, whether or not they actually are) as peacefully as possible.

Among the interesting things to be found in Hell's Five Hours is the near silent first scene (after the narrated prologue), which involves Nash putting his plan into motion, and is very sharply and coherently put together by Copeland. Also the fact that however much we may eventually be tempted to sympathize with Nash, he murders two innocent men before we even know his story. The film doesn't really let you forget that, either, nor does Nash especially regret what he's done, outside of understanding that those dead bodies mean there's no turning back for him. There's a brutality to all the killings -- and there are more than a few -- and the uniqueness of the setting (almost the whole 80 minutes takes place at the plant) combine to make the film seem somewhat imbalanced. I mean, mentally. As in, anything might happen. It's a night-time movie, and it feels like it. 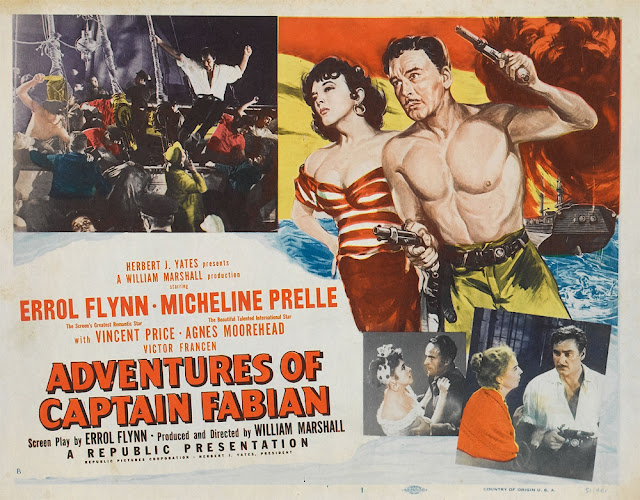 Adventures of Captain Fabian (d. William Marshall) - I have to confess something, which is that Errol Flynn is a fairly large blind spot for me. I've seen The Adventures of Robin Hood, and I think I love it the appropriate amount, but it's actually possible that just recently I hadn't seen any of his other films. It's perhaps because of this ignorance that when I looked at the Olive Films Blu-ray of his 1951 film Adventures of Captain Fabian I was surprised to discover that in addition to starring in it, he also wrote it. I wondered if screenwriting had been a large part of his career, though I soon learned that no, it wasn't (of course he wrote that pretty famous memoir, and also a forgotten novel called Showdown). Apart from Adventures of Captain Fabian, Flynn only has two screenwriting credits: a short directed by Jack Cardiff, and for which Flynn is only credited with writing the outline, called The Story of William Tell, from 1953, and, from 1959, the same year he died at the age of 50, a film called Cuban Rebel Girls. That film, from what I've fathered, features Flynn playing himself as a war correspondent, during Castro's overthrow of Batistsa. It was made with Castro's support. At least his support, one might assume.

So anyway, the point is, as a write Flynn had a strange career. There's not much of that part of his creative life to pick through, and Adventures of Captain Fabian will for now have to stand, along with that memoir My Wicked, Wicked Ways, as the most readily available and accessible. And it's fascinating! To begin with, that title...well, no. Here's the premise: set in pre-Civil War New Orleans, the film tells the story of Lea (Micheline Presle), a servant whose cruel mistress is engaged to marry a prosperous businessman (Vincent Price) with whom Lea is having an affair. The plot is fairly complicated, and it involves a murder which Lea did commit but which could reasonably be chalked up to self-defense, all of this in the middle of her "dealings," as it were, with Price's character, though she's sprung by Flynn's Captain Fabian, perhaps only because he wants to take down Price because of shady business dealings...anyway. I can't summarize it all here. But I think you get the idea.

All of which, the above I mean, is why Adventures of Captain Fabian is both so interesting and so much fun. To begin with, that title is misleading, and my guess is it was imposed on the project by a producer or investor or some such fucking guy. But it implies, doesn't it, some amount of swashbuckling, for which Flynn, in his heyday, which had passed by 1951, was best known, but this film has no swashing of buckles. To speed things along, I'll just say it: Adventures of Captain Fabian is a film noir. For one thing, while Price plays the one unambiguous villain, it's Lea, the femme fatale, who does terrible things but has her reasons, who drives all the evil and violence. Also, Flynn's Captain Fabian doesn't have "adventures." He has this one, in which he's duped. He's not a pirate, he's a businessman. He has a taste for revenge, sure, but don't we all? And while he has more resources than your typical film noir hero, he gets bounced around enough by people he shouldn't trust to qualify.

Why this film noir plot was stapled to a mid-19th century setting is something I don't know, though it could be that Flynn simply though it would be interesting to do it that way, and if so he wasn't wrong. As a result, though, it might seem, for a bit, that Adventures of Captain Fabian is "silly." But we're all adults here, and we know that melodrama is a stylistic choice, not a mistake. Inappropriate or poorly executed melodrama is known as "camp," and I fear that Adventures of Captain Fabian might be mistaken for camp by those who either misunderstand melodrama (and there's straight melodrama in this: a Theremin is used to indicate overwhelming anger, for example) or can't accept noir in a setting other than that which has been agreed upon. But that's what Adventures of Captain Fabian is. It's not a forgotten masterpiece, but it's a damn fun movie.
Posted by bill r. at 8:51 PM