Olive Films continues its tradition of predictably unpredictable DVD and Blu-ray releases this week with a pair of thrillers from the 1980s: Criminal Law and Street Smart. I saw them both, everybody! Read on! 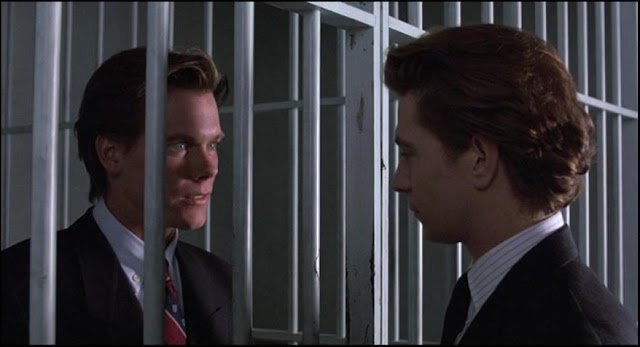 Criminal Law (d. Martin Campbell) - In 1988, Gary Oldman made his Hollywood debut. Prior to doing so, he'd become impossible to ignore in a string of idiosyncratically raw UK films that made him: Alex Cox's Sid and Nancy, Stephen Frears' Prick Up Your Ears, and the lesser-known (I admit I haven't seen it) Nicolas Roeg film Track 29, written by Dennis Potter. It was time to take Hollywood by storm, obviously, and he did so with Criminal Law, a quintessentially '80s legal psycho-thriller of the "We're not so different, you and I" variety. Co-starring Kevin Bacon as the psycho, Oldman stars as a flashy defense attorney who gets defendant Bacon, the wealthy son of an obstetrician played by Elizabeth Shepherd, off a rape-and-murder charge by simply flouting the judge's rules and focusing his entire case on dismantling the credibility of a single eyewitness (by arguing, essentially, "Sometimes people are wrong, so she probably is too, in this specific instance). Why the judicial process is the one realm of employment nobody ever seems to want to get right on screen, or care if it's gotten wrong in their filmed entertainment. But anyway, Criminal Law is pretty egregious in this regard, early on.

And the film (whose director would enjoy well-deserved praise for his career highlight, Casino Royale, almost twenty years later), never really gets better as far as credibility goes, but it does have Oldman, flying off the rails almost every fifth minute as he's assaulted by the guilt that comes with the realization that the man he saved from prison was actually guilty, and has killed again. Oldman is a fine actor, but let us not pretend that, especially in his early years, he didn't have a tendency to untether his entire self from all reality. As an actor, I mean. What suited Sid and Nancy doesn't suit Criminal Law, but he seems to have believed it at least might. On the other hand, there's a moment in the film where his character stumbles upon a mutilated corpse at night in a rainy park, and instead of slowly backing away in mute horror, as most actors would stoically play it, Oldman -- and I am prepared to give him credit for this, rather than Campbell, without knowing which deserves it -- runs screaming. Even shrieking! It's a moment of full-on gonzo terror, which your hero's not supposed to feel. But Oldman does.

As an overall film, Criminal Law does get better as it goes along, despite a Jerry Goldsmith score that nakedly rips of the Peter Gabriel song "Rhythm of the Heat" and Tess Harper coming off faintly ridiculous as one of the detectives working the murders (along with Joe Don Baker, who should've had top honors here). The last clutch of thriller moments are well staged by Campbell, with the same sense of clarity that would be a signature of his masterpiece Casino Royale. It has a good last shot, too, though one marred by an audio-based decision the means nothing as far as I can tell, but it was the '80s, so somebody evidently decided the film wasn't stupid enough (they were wrong). As for Oldman, he seemed to realize something was off about all this, as the best-known of his subsequent retreat from Hollywood are the J. R. Ackerley adaptation We Think the World of You and Tom Stoppard's Rosencrantz and Guildenstern are Dead. Then again, this takes us only to 1990, and then he's back in the US with State of Grace. Which is better than Criminal Law, and things settled down and got better after that. 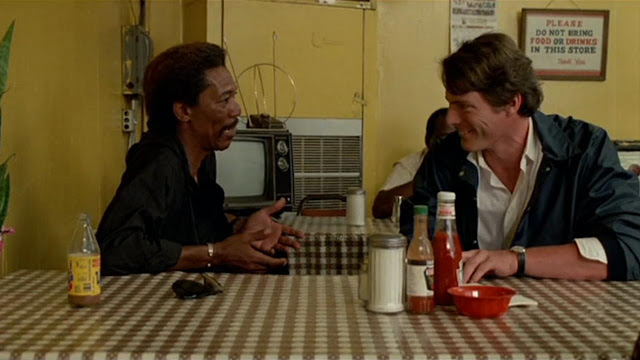 Street Smart (d. Jerry Schatzberg) - One thing you can't say about Gary Oldman's career is that it has lacked variety. You could say that about Morgan Freeman, however, a very fine, versatile, naturalistic actor who began working in TV and films in his 20s but didn't truly get noticed until he was in his 50s. That moment came for him in the late 1980s, and I'd wager that more people, have seen just one of his films since 1987 than had seen everything he did prior to that combined (excluding The Electric Company, maybe). Anyway, that moment was Jerry Schatzberg's Street Smart in which Freeman plays a mean New York pimp named Fast Black. Early in the film, Fast Black deals with a violent john by beating him down. The man has a heart attack and dies. At the same time as this throws Fast Black's life into a legal turmoil, a journalist named Jonathan Fisher (Christopher Reeve) decides, under a serious deadline, to make up a story about the life of an also made up pimp. Which his editor (Andre Gregory, going too far in every direction) loves. Then the DA (Jay Patterson) handling Fast Black's prosecution, and Fast Black's own lawyer, read this desecration of journalistic ethics and both think Fisher's talking about Fast Black. So here things for Fisher start to go pear-shaped.

Reeve is very good here as one of my favorite types of character in crime fiction: the man who has lived a decent life (one assumes as much in this case anyway) only because the opportunity to live otherwise never presented itself. His subsequent contact with the world of pimps and hookers intoxicates him, and he not only cheats on his girlfriend (Mimi Rogers) with a prostitute (Kathy Baker), but he practically does so at a party in front of her. The central thing about Fisher is that he's a stupid, naive piece of shit. He's surprised when Fast Black, who he begins spending time with, treats his women violently, and also briefly thinks he can talk the pimp out of such behavior. He's soon disabused of this notion, at which point he decides to live and let live, because he's enjoying himself too much.

This is a pretty weird movie, in a lot of ways. Its moral sense and concept of justice that is appropriate in society is kind of a mess. Schatzberg and screenwriter David Freeman seem to want the audience to hate Jay Patterson's DA, even though he's right about absolutely everything, and never does anything unethical or immoral or cruel. It's just that he's trying to do things by the book and he seems pretty uptight. Fuck him, I guess! The film also wants to announce its own social significance, even though by doing so it comes off as hypocritical. At one point, a black female journalist asks Fisher why he chose to write a story that focused on the worst in black culture, and she accuses him of being racist. Then she disappears from a film that is doing the exact same thing, and actually becomes that exact same thing even more, when Fast Black's violence ramps up, and Street Smart becomes more of a crime thriller.

But it's best when it's a crime thriller, and it's best when it focuses on Fast Black. Freeman is really great here. This was his breakthrough role, as I've said: just two years later, in 1989, he starred in Lean on Me, Driving Miss Daisy, and Glory. All in one year! And he's been delivering good or great performances ever since then, but of course he's been forced to be noble pretty much that whole time. He's so alive and immediate and frightening in Street Smart that you'd sort of assume that once people noticed what he could do, they'd want to see him play his full range. But apparently not.
Posted by bill r. at 10:26 PM