Close the Door When I Go 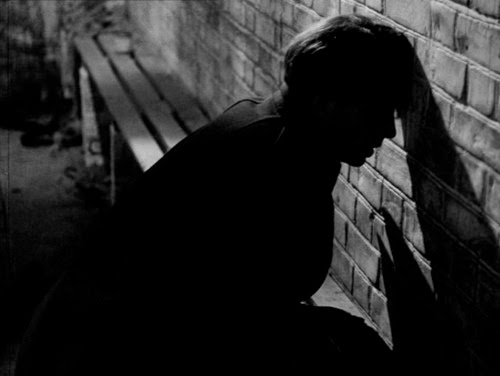 The reputation of British filmmaker Carol Reed, whose career spanned the mid-1930s to the early 70s, seems now to live under two shadows that he cast himself: the one he cast as the director of 1949's The Third Man, one of the handful of unimpeachable masterpieces in English-language cinema, a film of that rare type that is both humbling to watch and deeply, accessibly enjoyable (I am prepared to push my praise of it further than this and would probably meet little resistance if I did, The Third Man being The Third Man and everything, but you know how people can be), and the shadow he cast as the director of 1968's Oliver!, the boisterous Oliver Twist musical which wears its Broadway sensibility either proudly or shamelessly, and which committed what some regard as the unpardonable sin of winning the Oscars that 2001: A Space Odyssey was denied. It's a film that I don't recall thinking was actually bad, but maybe it is. Anyway, once these things take root, they often do so permanently.

There is, of course, more to Reed's career, but at least in the US not a ton of it is readily available. The Third Man was his twenty-second feature and remains his best-known by far, and finding most of what preceded it is not exactly a breeze. The Third Man was in fact the third of three Reed masterpieces in a row, following The Fallen Idol from 1948 (a Graham Greene adaptation, as is The Third Man), and Odd Man Out from 1947. The Third Man and The Fallen Idol were both at one time released on DVD and/or Blu-ray by Criterion, but both have since gone out of print (their release of Reed's Night Train to Munich remains in print). Undaunted, Criterion has just now released Odd Man Out, an adaptation not of Graham Greene but the coincidentally named F. L. Green, to DVD and Blu-ray. Hopefully this one hangs around a while.

In his new introduction to F. L. Green's novel, first published in 1945 and which has serendipitously just been reissued by Valancourt Books (I'm afraid I haven't had time to read it yet), Irish crime writer Adrian McKinty briefly charts the influence of the tradition of American crime fiction on Odd Man Out and British fiction in general, an influence, he points out, that is hardly surprising when you consider the number of American troops present during and after the war, and what they might favor in the way of reading material. So it naturally follows that Carol Reed's film version, the script for which was co-written by Green with R. C. Sherriff, would draw upon the still more-or-less new tradition of film noir that is, when you get right down to it, practically unavoidable when telling these sorts of stories. Anyway, speaking of this style, see above, to begin with, and then see below: 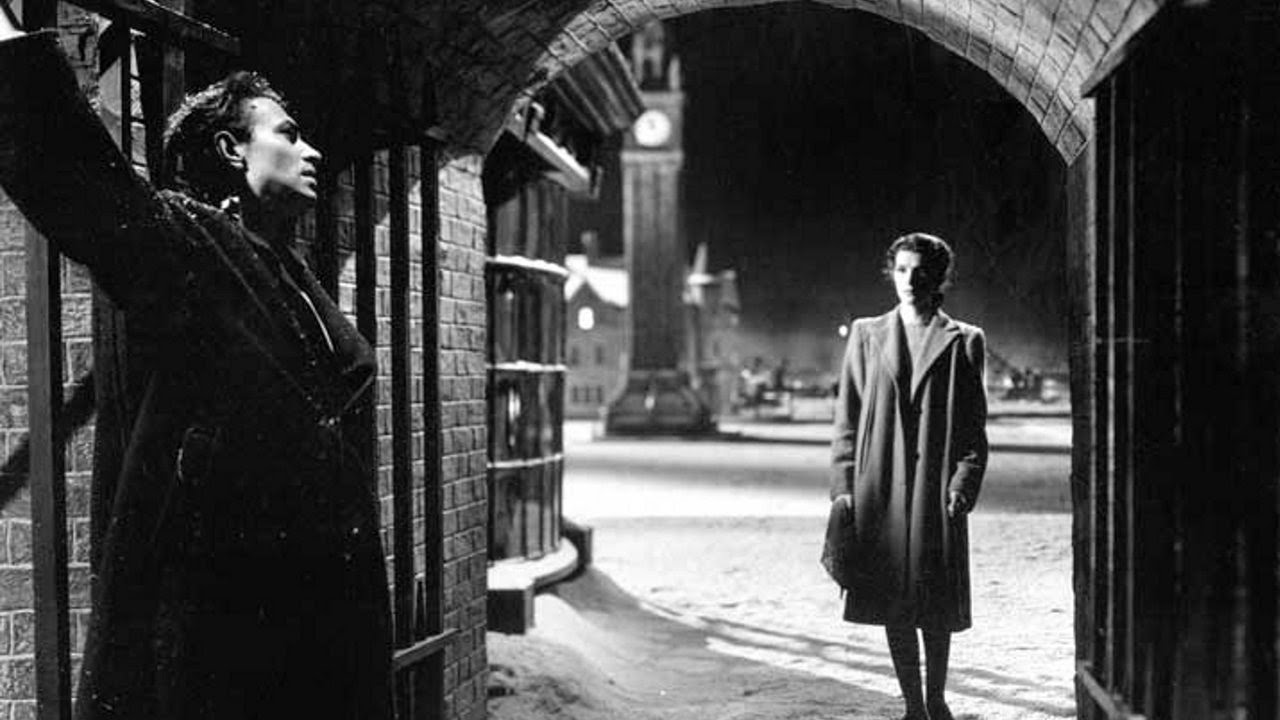 And what kind of story is this exactly? Well, actually first, look at this: 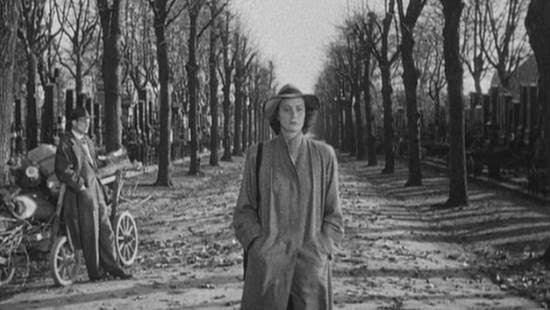 From The Third Man, obviously, but notice that how much mileage Reed was able to squeeze of of this sort of framing: a woman who's made up her mind in the middle, a despairing man on the left, the two of them flanked by some kind of orderly, symmetrical structure or landscape. Despite the second shot, most of both films take place at night, though Odd Man Out is even more of the night, if you get me, than The Third Man. In Odd Man Out, James Mason plays Johnny, the leader of something called The Organization, a kind of ideological gang of criminals based in Northern Ireland. So the IRA, in other words, though the politics of any of this, or rather the specific politics, are consciously not dealt with. Because what happens is, Johnny and his gang have planned to rob a local mill, the proceeds from which will fund their cause. But Johnny, who has recently escaped from prison and is, outside of this heist, lying low, reveals to his right-hand man (Robert Beatty) that he's begun to have doubts about using violence to further their goals. In general, there is a dispassion, almost a disorientation, about Johnny as he and his men head out to pull the job, and in the course of it not only is he wounded, but he shoots and kills a mill employee who tries to stop him. Cowardice and indecision lead the men he came with, who include Cyril Cusack and Dan O'Herlihy, to leave Johnny behind. Badly hurt and verging on delirious, Johnny escapes to a row of air-raid shelter where he hides until dark. All around him, the city knows he's on the loose, they know who he is, they know what The Organization is about, and they know he's killed a man.

This sets up the rest of Odd Man Out, which it would be difficult to say is not noir, but it no longer exists as any kind of heist film you've seen before. More than a heist film, or even more than noir, Odd Man Out soon becomes a picaresque: Johnny travels through the city, trying to make it back to his home, his hideout, and to the woman who loves him (Kathleen Ryan), along the way he meets a series of people, some who don't know who he is, but many who do, and they now must decide what course of action would best satisfy their conscience, if that kind of satisfaction even occurs, or appeals, to them. This means that apart from Johnny, the central characters in a major encounter, involving two women who tend to Johnny's wound and the husband of one of them who insists the right thing to do is call the police, are gone from the film once Johnny parts company with them. And so it goes, first in the air-raid shelter, where a young couple retreats for privacy and romance until the young woman nervously, touchingly says "I don't want to"; to the British soldier who believes Johnny is drunk; to the driver of the hansom cab who doesn't even know Johnny's his passenger; to the bizarre, motley trio of fringe-dwellers that include a jittery small-time thief (F. J. McCormick) and an amoral, alcoholic painter (Robert Newton, leaving it all on the table as usual). To most of these people, those who know who he is, Johnny will ask "Did I kill that man?" He only learns the answer to that when he overhears people talking about him in another room.

A crawl of text that opens the film tells the audience that the film isn't about the politics of Northern Ireland, but rather it's about what happens to ordinary citizens when they find themselves face to face with those politics. Shockingly, this doesn't turn out to be a dodge: it really isn't about the centuries-long question of Irish independence, or the changes Michael Collins brought about, or the mess that followed his assassination, or the growing reliance on terrorism by the IRA. None of that is brought up directly, at least, but what is at question is the morality of the situation. After Johnny is wounded, James Mason doesn't have a lot of lines in the film, yet the most pointed question asked by the film is asked only by him, though he doesn't speak the words; instead, the meaning of them become stronger as his strength drains away. The question is this: beyond a certain point, can a man's dreams survive his own aggressive attempts to bring them to life? If some of the citizens Johnny encounters show a yellow streak, and you could easily argue that a bunch of them do, that's because their city has been reduced to collection of fears and suspicions where any moral choice you make could end up ruining your life. Johnny's Organization contributed to that. We know Johnny has become conscious of this because nobody he meets cares as much about the man he killed as he does. And not even Johnny could tell you why that man had to die.
Posted by bill r. at 8:19 PM

Thanks for this. Always loved the film. I sometimes -- ungenerously, perhaps -- find the scene with McCormick and Newton a little too flagrantly over the top. But it's a gorgeously shot film, beautifully acted, and the one I always recommend to the eejits who think their St. Patrick's day viewing begins and ends with 'The Quiet Man.'

When I first saw this, I think I had the same reaction to Newton and McCormick but this second time around I have to say, I'm quite fond of that stretch. Part of it is the third part of that trio, the mysterious Tober played by Elwyn Brook-Jones. The whole thing is almost grotesque, which by that time suits the film.

One of my favorites, I just watched it again back in March. It reminds me a little of that stretch of It's a Wonderful Life in which George finds himself in that strangely changed and hostile version of his hometown, a world where he's never been born. Unlike that movie, though, there's very little in the way of moralizing about the situation, no real attempt to push a "correct" take on events and the people involved; things simply are the way they are, take it or leave it as you like. Which only adds to my fondness for it. In fact, I've always liked it a lot more than The Third Man.

Love that last paragraph in particular there Bill.