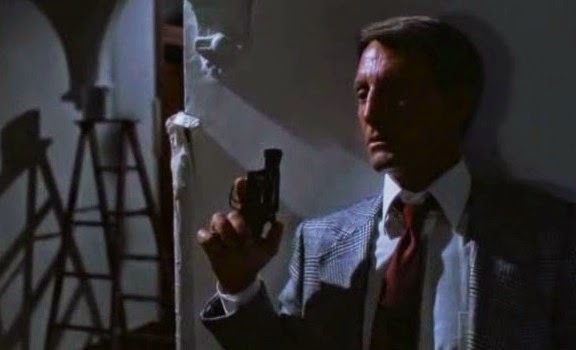 When Roy Scheider died in 2008, a bunch of us cinephiles or whatever got to reminiscing, as you do, and I said to my friend Greg Ferrara, formerly of Cinema Styles, currently of TCM, that in my view Scheider was a better actor than Dustin Hoffman (I assume one or the other of us had brought up Marathon Man), who had by that point been canonized several times over while Scheider was regarded by most as little more than a highly dependable actor who everybody liked. No small achievement as far as building a reputation goes, I'll grant you, but pretty small beans when set beside his performances in films like All That Jazz, Sorcerer, Jaws, and on and on. Anyway, Greg responded by saying something along the lines of "The fact that I had to stop and think about that tells me you're onto something." So you see, I was right all along. I bring this up because since he died, my belief that Scheider was one of the greats has only strengthened, as has my frustration that outside of the films already mentioned he didn't have a career filled with the kinds of roles that would place him where he truly belonged. By and large, Scheider made the kind of films which would ensure that he'd be thought of as dependable and beloved, and not much more.

But even so. In my opinion, the Dustin Hoffmans of the world would have done well to mix in more of the type of film that Scheider built a career from. There's something about being able to plug into the small films as well as the big ones, the formulaic and the innovative, that allows for Scheider's brand of breezy, virtuosic, and varied naturalism. He could move from the existential horror of Sorcerer to what I guess you could all the existential joy of All That Jazz without changing himself fundamentally, without accents or makeup, but if that's not range then what is? He played a lot of cops, too, but even within that you have seen-everything tough guys he played in The Seven-Ups and The French Connection, the brave, good-hearted, but in-over-his head police chief in Jaws, as well as, and here we come to the point, the "weary modern cop," which is a certain type, pretty much always a middle-aged guy because part of being wearily modern is seeing everything you felt a connection with fade away. Scheider plays this type in Night Game, a thriller from 1989 written by Spencer Eastman and directed by Peter Masterson. Almost completely forgotten (the cover of the VHS I used to see, but never rent, at Blockbuster way back when recently came back to me in a rush) it was recently revived via a release to Blu-ray by Olive Films, and I gotta say, it's good to have it around.

Scheider plays Mike Seaver, an ex-minor league baseball player and current Houston homicide detective who, when we meet him, is still rebounding professionally from something that happened to him on the job in Dallas. He's also just proposed to Roxy (Karen Young), his much younger girlfriend. A life of regret that is further weighed down by having seen too much on the job (much of this is to be inferred from Scheider's performance and from casting Scheider in the first place) is threatening to brighten up, in other words, except there's a serial killer on the loose. He kills blonde women, at night, and the timing, placement, and pattern of the murders, it's eventually believed, point to a connection to the Astrodome. It's to the film's credit that Seaver doesn't jump unreasonably to this conclusion, which just happens to be true; on the other hand, this film is called Night Game.

If this sounds like a dull, run-of-the-mill '80s cop thriller, well, to some degree it is. The murders, as staged by Masterson, sort of go through the motions of being suspenseful -- a woman sees someone following her, she runs, she trips or whatever, etc. The only time I cringed in sympathy or suspense during one of these scenes was when one of the victims, shoeless so that she might run better, is shown about to step on a nail. Masterson, best known then as now for The Trip to Bountiful, for which Geraldine Page won an Oscar, and the Gene Hackman/Terri Gar romantic comedy Full Moon in Blue Water, which, okay, maybe it's not well known but my brother liked it (it also receives an incongruous post-modern wink in Night Game) clearly doesn't care about that stuff. He also doesn't care that the audience is going to clue in very early that the blonde-haired Roxy fits the victim profile and so she's probably better look over her shoulder. It's not that Masterson doesn't use this -- he does, twice. But the time he puts more effort into the time it doesn't pay off than the time it finally does.

No, what Masterson cares about, and what Scheider makes possible, is all the small stuff. The "character bits" I guess they're called. The subplot about Seaver's relationship to Roxy and her mother won't stun you with its blinding newness, but these are real people whose lives move along even as the bodies pile up, because those are the day-to-day facts. Which is to say that Masterson is "saying" this, or anything else, but the little moments of life are what clearly matter to him, and which Scheider brings off without an ounce of ostentation. He just falls into it. He looks like a guy who's been doing everything that he's ever done for a very long time, but this tiredness is offset by Scheider's physical leanness and overall air of competence which, if you're on the wrong side of him, made him seem dangerous (this is why he's so effective in Marathon Man). Scheider is one of the few actors who could look just as at home clutched in a mortal struggle with a psychopath as dozing in a recliner, a half-empty can of beer nearby. Again, if that's not range...

Night Game also benefits from being set in Houston, rather than New York or Los Angeles, and from a cast that, in addition to Scheider and Young, includes Richard Bradford, Lane Smith, and Paul Gleason. Those last two combined to probably play more assholes than any other two actors during the 1980s, but actors get as much work as they did because they're good and because they're pros, as they show here. The police station, as a result of the casting and the setting, has a real idiosyncratic life to it, not one that is self-consciously quirky, but one that has built up by the real people within it. In this regard, it's a shame that Masterson was hemmed in by what either he or the studio regarded as the constraints of the genre (the myth that everyone believes in) because there's a terrific cop drama buried in here. What we get instead is a solid cop thriller that draws its strength from Scheider. And who better to leach from than a guy who couldn't fake it if you paid him?
Posted by bill r. at 10:02 PM