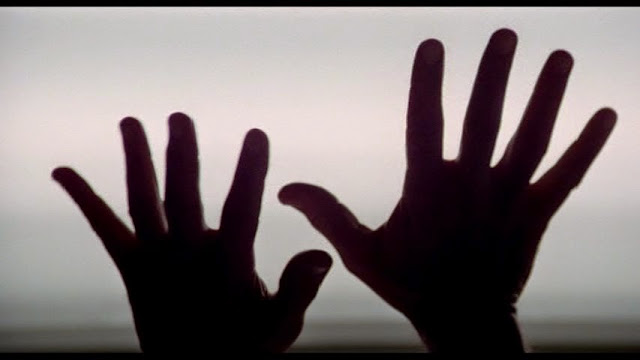 Based on his work as a film director, I think it's safe to say that Bob Fosse's relationship to show business was somewhat complicated. The unspoken plot of at least his last three films (I'll cop right here to not having seen Sweet Charity, something I'm regretting right at the moment), and yes I think you could make a case for including Star 80 in this, is an escape from the old-fashioned and traditional to an adventurous new kind of entertainment. "Entertainment" being an important word, an inescapable one, whatever else Fosse's characters might be fleeing.

To narrow this down a little bit, look at Lenny, Fosse's 1974 film adaptation of Julian Barry's play about the life, trials, and death of comedian Lenny Bruce. Bruce began his career as a lame, sub-sub-sub-sub Henny Youngman Borscht Belt comic, bombing horribly until, in the film, a confluence of events and humiliations leads him to add some edge to his material. But surely what he's leaving behind with such palpable disdain is the same comedy that to some degree inspired him? This new path also leads more or less directly to his doom, in a couple of different ways.

So with that in mind, whatever influence Fosse drew from Fellini in making his 1979 autobiographical phantasmagoria All That Jazz, just now released by Criterion, it is also very much an expansion, almost a remake, of Lenny. The bad Catskills jokes show up here, too, when the film goes back to the childhood of choreographer, dancer, film director, and et cetera Joe Gideon, to the strip club where he tap dances between strippers, who molest and humiliate him before he takes the stage. As an adult, Gideon (Roy Scheider), obsessively ties together show business, performance, and sex. Maybe the hatred of old show business comes from that humiliation too. In any case, All That Jazz is basically this: Joe Gideon is working day and night on both a new stage musical, the specifics of which, outside of a couple of numbers, we're not privy to, and the editing of his new film, called The Stand-Up, about an aggressive and controversial stand-up comedian, played in All That Jazz by Cliff Gorman, who originated the role of Lenny Bruce in the original production of Julian Barry's play, though Dustin Hoffman took over for Fosse's film, all of which we should regard as a coincidence only, and about which we should make no more. 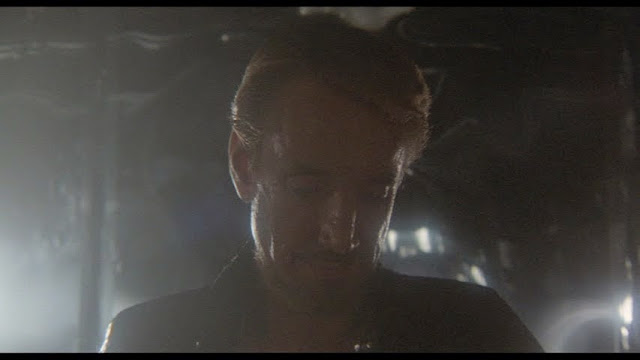 Anyway, add to that the facts that Gideon is a serial adulterer, having cheated on his previous wife Audrey (Leland Palmer), with whom he has a daughter (Erzsébet Földi), and who, Audrey is, starring in his new Broadway show, and currently cheating on his girlfriend Katie (Ann Reinking), also that he smokes too much, drinks too much, takes too many pills, and has a bad heart, all of which is suddenly intercut with scenes that don't seem to take place on our plane of existence, with Gideon talking about his life to a mysterious, ethereal woman (Jessica Lange), take all of that, as I say, and you have the plot, if that's the word you want to use.

All That Jazz has the reputation of being extremely critical examination of an artist's failings by the artist himself, and to some degree it certainly is. Gideon is mean, self-destructive, arrogant, unfaithful, all of that.  But the film is also quite self-regarding -- Gideon is a genius, the women he blatantly cheats on still love him, and sometimes take a "Oh you men!" attitude towards him. It's very old-fashioned in that way, as the ever-pushing-forward Fosse could often be, which is part of the fascinating contradiction.  The child tap-dancer grows up to furiously shed the old ways of dance and choreography, all the while hopelessly wrapped up in dying attitudes about actual life.  Which, I mean...

So, too, was Lenny Bruce in Lenny, a film that All That Jazz resembles so closely, it was almost startling watching them back to back.  When it comes to infidelity, the aspect of Bruce/Gideon/Fosse that Fosse is most willing to take his lumps for, Lenny is much harsher, and far less forgiving. Look at the scene when Lenny Bruce confronts his wife (Valerie Perrine) because she has fallen deeper into the life of sexual hedonism he essentially forced her into than he would like.  His cruelty and hypocrisy is breathtaking, and Fosse doesn't flinch, or try to soften it. Yes, Bruce apologizes, but doesn't everybody? It's the moment itself, which Hoffman plays with admirable ice-bloodedness, that sticks.  But that's there, and so is the connection with the world of burlesque (Bruce's wife was a dancer), shitty one-liner comedy (I don't want to be misunderstood, it's not one-liner comedy that I dislike, it's shitty one-liner comedy that I dislike) delivered in a maroon suit and bowtie. Joe Gideon/Fosse grew up in it, Bruce lived it. The child is father to the man, and Lenny is an earlier film than All That Jazz. You can almost chart Fosse's expansion on his ideas. 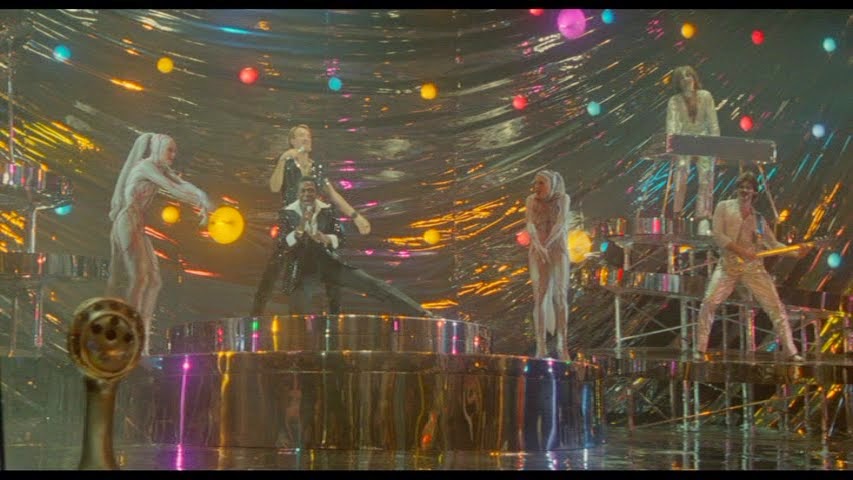 And have I even left myself enough room to address it all? Lenny ends, as biopics so often do, with the death of its subject. Lenny Bruce died of a drug overdose, after several arrests on obscenity charges, trials, possible jail time, and a stand-up act that had become a shambles. After a long look at one such depressing spectacle, Fosse and his editor Alan Heim abruptly cut to Bruce's corpse, nude on his bathroom floor. It's my understanding that there was originally supposed to be more of a build to that shot, but Fosse and Heim realized that all that footage was doing was prolonging the inevitable, so they cut to the corpse and ended the film. It's still a shocking cut, but within the only five films he directed, it's somehow not the greatest smash cut to a corpse in Bob Fosse's career.

Now, there's stuff in All That Jazz that I don't like. The film's big dance number, "Airotica," which Audrey says is the best work Gideon has ever done, strikes me as hopelessly silly, though as someone who knows nothing about dance or choreography my criticism of it should probably stop there -- suffice it to say, I much preferred the Reinking/Földir "Everything Old is New Again" number that comes later, which among other things is more relevant to the rest of the film in almost every way. Also, frequently comedy is an aim of All That Jazz, yet I don't find it particularly funny. It also indulges in one of my least favorite clichés, when, during a joyous montage of Gideon's wild antics after his bad heart lands him in the hospital, there's a shot of a bunch of his friends being just a bunch of total goofballs, cracking everybody up by putting rose petals on their face and making funny gestures. This is part of a terrible tradition that would take too long for me to unpack now, and anyway, it's just an example. Occasionally the movie falters, is what I'm getting at.

It doesn't matter, though, because Fosse's entire filmmaking career was building away from that stuff to something else. After the aforementioned antics, Gideon's health begins to slide, and the film is soon incorporating the basic style used in the Jessica Lange scenes to create what is both a real and unreal journey, by Gideon, into what might have been Hell had another filmmaker conceived of this (but what other filmmaker would, or could?) but in Fosse's hands becomes an explosive celebration of, mockery of, and metaphorical, melancholy, regretful, grateful embrace of death.  The twisting of the Everly Brothers' "Bye Bye Love" into "Bye Bye Life," performed by Ben Vereen (and Roy Scheider, a bit -- neither a singer nor a dancer, Scheider, who is wonderful, as always, in the film, does a fine job of mimicking the necessary physicality), and the flamboyant dance number that surrounds it, is one of the more, let's say peculiar, depictions of the idea that when one dies, one's life flashes before one's eyes. It's vibrant, and moving, and ridiculous. It's insane that somebody had this idea and then was able to put it on screen. It's one of the most bracing confrontations with mortality I have ever seen. And if you're a far too morbid individual, as I am, one who dwells way too often on one's eventual and inevitable death, this scene is something of a gift.

Bob Fosse snatches up the death of Lenny Bruce and runs for it. And that final smash cut. Holy shit.
Posted by bill r. at 7:41 PM

...one of my least favorite clichés, when, during a joyous montage of Gideon's wild antics after his bad heart lands him in the hospital, there's a shot of a bunch of his friends being just a bunch of total goofballs, cracking everybody up by putting rose petals on their face and making funny gestures.

I'm not sure of this "terrible tradition" of which you speak, or whether such frippery actually amounts to a cinematic cliché in any event. However, it's probably safe to say that "goofballs" played a part in more ways than one.

I love this flick, and that "Everything Old is New Again" scene is one of the most charming bits in a movie that I've ever seen. Actually I love "Airotica" too, I mean Sandahl Bergman in a pilot's cap and tights.