A Trysting House for Noisy Couples 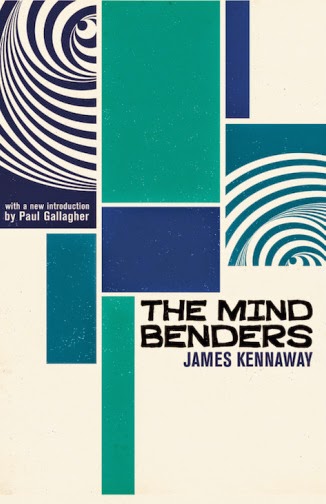 ﻿
James Kennaway was the author of seven novels, but only five were published during his short lifetime.  The first of those, Tunes of Glory, is perhaps his most famous, and even in that case the fame now reflects more on the Ronald Neame film version, starring Alec Guinness.  One of his posthumous novels has maybe the greatest title ever given to a story about someone discovering that their bad habits have drastically shortened their life -- it's called The Cost of Living Like This.  In that book (which I haven't read, but will, and soon) the lead character is dying of lung cancer at the age of 38, and one might pair this with one's knowledge that Kennaway himself died at 40 and think "Ah, I see," but no, Kennaway died when he suffered a heart attack while driving.  This was forty-five years ago now.  Since then, people will occasionally watch one of the films Kennaway wrote, such as The Battle of Britain and The Shoes of the Fisherman, as well as Tunes of Glory, the screenplay for which he was responsible for.  The novel Tunes of Glory has sporadically regained some kind of grip on a life in print (the most recent edition I've been able to find naturally has a picture of Alec Guinness from the film on the cover), while his other novels, which also include Some Gorgeous Accident, a fictionalized account of the affair Kennaway's wife had with John Le Carré, have mostly slid from view.

Until now, or until recently.  Valancourt Books, a terrific publisher that focuses on forgotten or neglected literary, horror, Gothic, and gay fiction.  Last month, Valancourt put out a new edition of The Cost of Living Like This, and tomorrow they'll reprint Kennaway's 1963 novel The Mind Benders.  The Mind Benders was also adapted into a film, again with a screenplay by Kennaway, this time directed by Basil Dearden, and starring Dirk Bogarde.  And listen, I'll have to cop to this eventually, my experience of Kennaway, apart from a distant viewing of The Battle of Britain, is confined to a recent reading of this very book, which is to say, The Mind Benders. But as often happens when the judgment of history has been found wanting, and a writer like Kennaway is rescued from the void, my reaction, even to an imperfect book like The Mind Benders, is one of excitement, as though Kennaway was a talented newcomer, not someone whose entire life's work has already been produced, and whose death occurred almost fifty years ago.

The novel begins by introducing the reader to Major Hall, an officer in British Intelligence, nicknamed "Ramrod" because of his very narrow and rigid approach to his work.  Kennaway's first sentence tells us that Ramrod is "hardly as exciting as his celebrated colleague...James Bond," which when reflected upon once you're deeper into the book is a knock on both Ramrod Hall and James Bond.  Bond is a ridiculous fiction whereas Ramrod, Kennaway argues with that very precise type of sardonicism perfected by mid-century English writers, is what such men are really like. I'm always skeptical when such an argument is made in a work of fiction, but that doesn't mean Kennaway's way of going about it isn't delightful.  Later in the novel, after Ramrod has watched a strange film that is central to the novel's plot and Ramrod's own investigation, Kennaway writes:

The film puzzled more than impressed him, which was not perhaps too surprising, as the only thing that really impressed him were pantomimes on ice and actors flying in Peter Pan.  'Damn clever,' he'd say of them, or sometimes, 'Damnably clever.'

To clarify things, Ramrod is investigating a Nobel Prize-winning scientist named Sharpey, whose Communist past and current strange behavior have put him under suspicion of espionage.  When Sharpey leaps to his death from a moving train -- as his naïve young colleague Jack Tate watches in horror -- Ramrod is led to investigate Sharpey's actual work, which has to do with sensory deprivation.  At the college where Sharpey and Tate work is a lab where Sharpey and another colleague, an American expatriate named Longman, have built a tank and suit and overall environment that allows them to reproduce the basic conditions suffered by a French scientist named Bonvoubois, who was found stumbling frightened and half-mad from a natural, Arctic form of sensory deprivation. It's not the cold that affected him, and, subsequently, student volunteers, so strongly, Sharpey and Longman realized.  The film Ramrod watches, with Tate and Norman, Sharpey and Longman's lab assistant, shows the two scientists, one dead and one not yet met by Ramrod (or the reader), explaining themselves:

'It hadn't anything to do with low temperature,' [Sharpey explains on the film]... 'Bonvoubois and our student guinea pigs had been affected not by the cold but by their prolonged isolation. One week later we changed the name of the laboratory outside our main building to "Isolation".'

With Tate not being smart enough and Norman merely being an assistant, that leaves Ramrod with Longman.  Longman, it turns out, is the protagonist of The Mind Benders, though he doesn't appear in person, as it were, until page 42 if this 145-page novel.  Longman is married to Oonagh, whom Jack Tate is in love with, and he, Longman, has been missing from the lab for several weeks. Sharpey died, Kennaway tells us, and Longman fled. When he goes to Longman's home to question him, Ramrod (and Tate, who, to put it bluntly, finds excuses to come sniffing around) finds a calm man who is deeply in love with his wife, with a kind of weary, or even melancholy, uxoriousness, and this love is reciprocated.  But when he learns of Sharpey's death, and of Ramrod's suspicions that Sharpey was a spy, Longman returns to the lab, against Oonagh's protests.  Up to now, Sharpey had entered the isolation tank.  It was Sharpey who jeopardized his sanity.  Now, to find out what prolonged stays in the sensory deprivation tank can do to a man, and may have done to Sharpey, Longman takes the place of his dead friend.

So what is Kennaway going after here?  Not what you'd expect, I suspect.  Coming to The Mind Benders at this late date, it's hard to not think of Ken Russell and Paddy Chayefsky's Altered States, and I did wonder going in if the similarities would be strong enough to cause me to cast a sideways glance at that later film from here on.  But outside of sensory deprivation as a launching pad, the two stories have almost nothing in common, other than that the tank does cause characters in each to regress to a more primitive form, or mindset.  It's what this is all in aid of in The Mind Benders that sets it apart.
When we first meet Longman and Oonagh, and learn of the virginal Tate's love for her, it seemed to me that this was merely another example of mature domestic matters standing alongside, or perhaps even overshadowing, the genre plot that you thought was going to be the thrust of the thing -- this isn't uncommon in English fiction from this general era.  You can find this kind of domestic drama sharing center stage in horror novels as diverse as Simon Raven's Doctors Wear Scarlet and Kingsley Amis's The Green Man. In The Mind Benders, however, it's not a matter of one thing sharing center stage with the other as it is the domestic drama actually being the center stage on which the genre material performs. Or vice versa. I haven't figured out which it is.

Anyhow, while Sharpey's story is resolved, it's what the isolation tank does to Longman, and by extension Oonagh, that is the reason the book exists at all.  Suffice it to say, what it does to Longman is unpleasant, but while Kennaway himself makes the Jekyll and Hyde comparison he does so only in passing.  Even though at times for the reader it will remain to be seen how badly Longman's personality has been twisted, in other words, how far, how evil, he will become, what's unsettling about The Mind Benders are the moments of almost homey cruelty, the kind of casually nasty remark by Longman about Oonagh, and heard by third parties, to whom these comments are often addressed, that may remind the reader of actual domestic nastiness they may have witnessed, or experienced.

So the idea of "sensory deprivation" becomes a rather clean metaphor for what it takes, psychologically as well as in relation to actual senses, for a man to not ruin what he has. A man specifically -- I don't know when Kennaway's wife cheated on him with John Le Carré, but it would be interesting to know how it coincides with The Mind Benders.  Was the novel a somewhat disguised attempt to address that part of his life, or is it merely a coincidence?  Or a foretelling?  The novel's end is not its strongest bit.  Too much of the dialogue comes pretty close to being of the "These are our themes" variety (there's also symbolism involving a dog that is at once obvious, silly, but somehow successful, possibly because Kennaway kind of throws it away), and things conclude too neatly. I wonder if Kennaway wasn't sure if he should really go for it.  As a matter of fact, as Paul Gallagher writes in the introduction to the Valancourt Books edition, The Mind Benders was written specifically as a companion to the Basil Dearden film -- in effect Kennaway novelized his own original script, as Elmore Leonard did with Mr. Majestyk and Budd Schulberg did with Waterfront. If he was unable to go beyond a certain point with the film, perhaps a need to remain faithful to the screen version forced him to go easy in the novel as well.  I don't know.  But even if the novel The Mind Benders peters out a little bit at the end, the rest of it remains an unusual and gripping genre novel, not about spies or violence, but about marriage. Which I think we can agree is an unlikely thing for a genre novel to be about.
Posted by bill r. at 9:43 PM