As Though I Had Wings 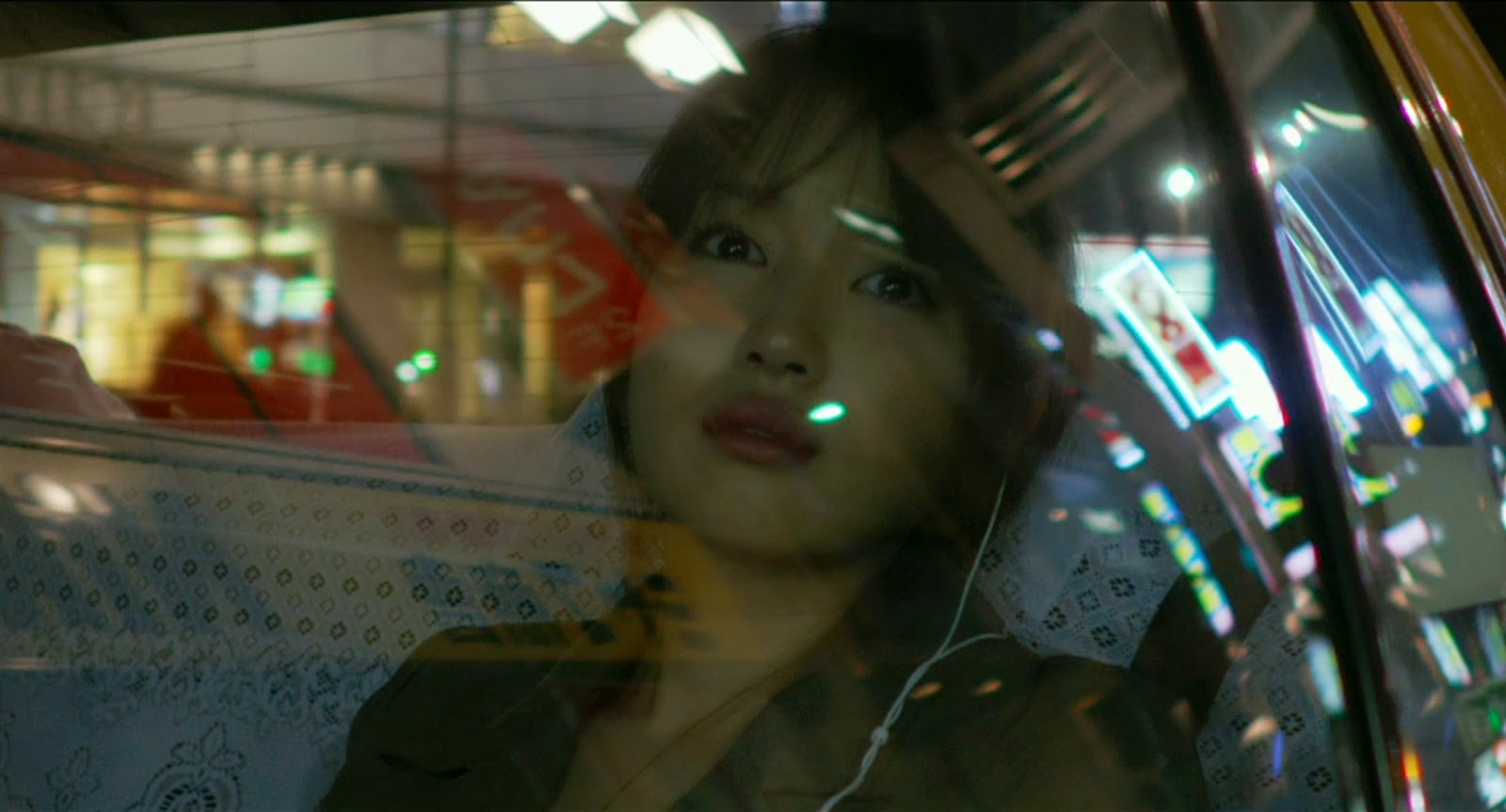 It's very strange to consider that many of the best films that lay down as part of their aesthetic a close approximation of every day life are themselves, and one could say "as a result," very strange themselves.  Take, for instance, Abbas Kiarostami's Like Someone in Love, which Criterion is releasing tomorrow on Blu-ray.  I've seen the film twice now, and watching it for the second time yesterday I was struck that a large portion of the film plays it in something close to real time.  From the moment Kiarostami cuts from the (apparently platonic) night the elderly writer and translator Takashi Watanabe (Tadashi Okuno) has spent with the young prostitute and student Akiko (Rin Takanashi) to Takashi driving Akiko to class the next morning, from that cut to the end credits, that hour or so of film could be reasonably argued to be one scene.  The fifty or so minutes that precede this is maybe, what, three scenes?  And all through these few scenes, a lot of ground is covered even though "not much happens," until the end when comparatively a lot happens, and the every day blows up with an almost terrifying ambiguity.

There is, I suppose, a cliché at the heart of the film:  an old, intellectual widower seeking a few brief hours of companionship from a perhaps impossibly sunny young prostitute.  And together they will find a new kind of love or something.  Even the fact that there is no sex, and that Takashi possibly never even wanted sex from Akiko, is a standard-issue wrinkle in this whole premise.  If merely described, the film can sound manufactured.  But Kiarostami is less interested in the premise itself than it what reality he can extract from it.  So during their evening together, the two discuss soup, family, a little bit about Takashi's job, the fact that Akiko believes that she resembles many people, the painting "Training a Parrot" by Chiyoji Yazaki, plus Akiko tries and fails to tell a couple of jokes (and Takanashi really is almost impossibly charming during this stretch), all of this written and performed in the exact cadences of small talk delivered by two strangers who want to get along with each other.

But there's stuff the succeeds and precedes their evening together.  Impossibly charming though Akiko might be, she doesn't want to spend her night in this old man's apartment, nor does she particularly want to be a prostitute for anybody.  There's something about Akiko that's not entirely easy to pinpoint, something about her separation from the rest of the world.  It's a separation that is perhaps inherent in her role as prostitute.  The film opens on a shot of a restaurant full of people, while a woman's voice carries out her side of, we will learn, a phone conversation.  Akiko is the speaker, but she's not on-screen.  The space on screen she would traditionally occupy is possibly, we might think before things become clear, occupied by this woman off to the right, but no, when she turns her head we can see she's not saying the words we're hearing.  But when that woman, who turns out to be another prostitute and friend of Akiko's named Nagisa (Reiko Mori) moves into that empty space to speak with Akiko, we realize that what we've been looking at is Akiko's reverse shot of a shot/reverse shot construction, the other half of this construction being empty space.  Nagisa may slip in there, and she may be Akiko's friend, but she's intruding.

Later, Akiko is in a cab heading towards Takashi's apartment and listening to her phone messages, most of which are from her grandmother who is in town and was hoping to meet Akiko for lunch.  There are several of these messages, chronicling the grandmother's lonely day as she keeps trying to touch base with her granddaughter.  This sequence culminates in a scene of heartbreaking distance that might paint Akiko as cold if it wasn't becoming clear that this fundamentally nice (she treats Takashi with nothing less than warmth despite the fact that, had her pimp given her a choice, Akiko would have been just about anywhere else that night) woman is pulling away from other people.  It's become easier to talk to a client than to her grandmother.  There's too much shame for anything closer.

All of which could explain how she ended up engaged to Noriaki (Ryo Kase), an angry, jealous, suspicious, insecure and human young man who looms over the second half of the film.  He's a potential threat to Takashi, who Noriaki mistakes for Akiko's grandfather when they meet outside her school the next day, and a clear threat to Akiko, who by now has related to Nagis some of the controlling and unsettling phone conversations she's had with him the night before.  It's plain that if Noriaki ever learned how Akiko earned her keep something terrible could happen to her, but of course Kiarostami is far too curious to portray the young man as some looking-up-from-lowered-brow thriller villain.  He's desperate and pathetic and pitiful, all of which make him sympathetic while heightening the danger.  In any case, he's the key to the whole film.  Akiko may be the film, but both Takashi and Noriaki are the title character, as it were.  Though Akiko is the object for both men, nobody, least of all Kiarostami, is raising any impossible pedestals for her.  Yet why an unhinged man like Noriaki could focus his obsession on Akiko is easy to see, and why Takashi, a man in his eighties, would want, or need, to step in as her protector is even easier to understand.  As the Lerner and Loewe song that gives the film its title, and which we hear sung by Ella Fitzgerald at various times throughout, says, behaving like someone in love means you bump into things (admittedly, their version of the line scans a bit better).  If that doesn't describe the last half of this film, this nearly real time escalation from simply giving someone a ride to class to fearing for one's life in the span of an hour, then I don't know what does.

I said before, back when this all seemed to make some kind of sense, that a plan to represent the every day in art can result in a strange kind of poetry.  Like Someone in Love is comprised entirely of every day moments, or moments that, even if they're not a typical part of a person's life at all, are still presented by Kiarostami in every day terms, as these moments are familiar to these characters.  Moment by moment, and conversation by conversation, the film feels as if it's happening as you watch it.  This quality allows the film's literally shattering conclusion, which must in the grand scheme of things, count as "crazy," seem inevitable, its unresolved nature instilling in the audience some sense of the panic and fearful irreality that is now, perversely, alive in the characters.  This morning could not possibly have led to this moment, and so on.  But if you look at it again, of course it did.  It's a strange world, but compared to what?
Posted by bill r. at 5:57 PM