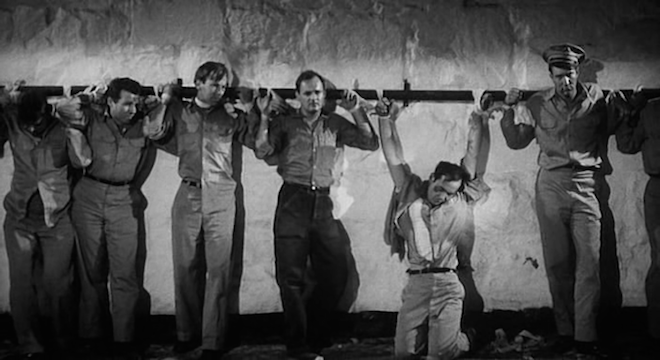 Let me tell you why a film as expertly made as Jules Dassin’s Brute Force nevertheless irritates me so much: in its attempt to castigate the nation for the appalling condition of its prisons, it constructs an inmate population consisting, apparently, entirely of innocent men. God knows they seem free of any guilt. The head prison guard played by Hume Cronyn (in a great performance) seems to have rounded up all of these men at random for his own sadistic amusement. We should put a stop to that! So Dassin’s film is a pretty rare beast: a message movie that is a good movie while being a bad message movie. Most filmmakers with a message they’d like to impart and fail at doing that well are going to fail at the rest of it, too. Jules Dassin wasn’t most filmmakers, however, so Brute Force comes out ahead in the end, but despite itself.

Another film that tackles the exact same subject matter and is as blunt with its message as Brute Force, but successfully and gratifyingly avoids the simplicity of Dassin's film is director Don Siegel and producer Walter Wanger's 1954 film Riot in Cell Block 11. Today Criterion has released this film on Blu-ray, and included in the accompanying booklet is an article written by Wanger the year of the film's release. In the essay, Wanger is arguing for the same kind of prison reform that his film calls for, and he's doing it from a place of experience, having spent time in prison (about 100 days, mostly in a facility that Wanger says he was told came off like the Waldorf Asotria next to other places he might have ended up) for...well, Wanger doesn't say. Attempted murder, if you're curious, and having noticed this withholding of information before watching the film, I must say it gave me pause. I worried that Riot in Cell Block 11 would, like Brute Force before it, paint the inmates as nothing but a group lovable mooks who had frankly had just about enough of this poor treatment. It's another facet of films like this that the misdeeds of the criminal -- if he's ever acknowledged as such -- must be understood and empathized with, whereas the misdeeds brutal wardens and/or prison guards don't need to be understood because we already know these guys are just a bunch of sadists, and nothing about their jobs our outside life, or the kind of men they're called on to supervise, could ever offer up anything with which to empathize.

So I was gearing up for frustration, but I was being unfair. Riot in Cell Block 11 is really quite remarkable in a lot of ways. Not surprisingly, being a Siegel film, it's very lean: 80 minutes, in and out, and the prison riot gets off the ground just a few minutes after the opening credits. Today we might regard it as a cross between a procedural and a docudrama. The key players are Neville Brand as Dunn, the leader of the riot who not only draws up a list of very reasonable demands, but also threatens quite sincerely to kill the guards the inmates have taken hostage (there is glee, even desire, in his eyes as he helps develop a particularly grotesque method of doing so, should he decided the occasion calls for it); Carnie, played by Leo Gordon, Dunn's psychopathic right-hand man, similar to John Cazale's Sal in Dog Day Afternoon in that you understand that Carnie, like Sal, would happily go on a murder spree without someone to control him; Robert Osterloh as The Colonel, an intelligent peaceful man who did one stupid and terrible thing once but doesn't have it in him to do such a thing again, a person who approves of Dunn's demands but not necessarily of his methods; and the eternally weary Emile Meyer as the compassionate Warden Reynolds. He's compassionate, but no pushover. At one point, in the middle of everything, Reynolds barks at the rather myopic Commissioner Haskell (Frank Faylen) that he would never sign off on the prisoners' demands if it wasn't for the hostages.

From here, Siegel, Wanger, and screenwriter Richard Collins attempt to create a story of tension, violence, and justice in which no solution is without its drawbacks, all the while being quite clear about which side they come down on. This is a task at which they largely succeed. Occasionally, as when the warden points out that you can't avoid riots by treating inmates badly only to have the commissioner ask if he thinks you can do it by treating them better, the filmmakers' are half-assing their complexity, but other times they hinge their whole film on it. When The Colonel, nursing an injured hostage, seems to find the very idea of being a prisoner (he's only guilty of manslaughter, after all) to be justification enough for disliking his guards, if that rankles you (it did me) you can hold on and see how The Colonel is treated by his fellow inmates when he works hard just to save lives. (I don't want to ruin the moment by giving too much context, but there's a sequence of shots relating to The Colonel in this moment that first show the rioters slowly backing up, and then the camera backing away from what they see. This section of the film is striking, chilling, and rather damning of the men whose cause Wanger and Siegel have taken up.) Or how the guards are presented in general, or rather how their plight is presented (I don't hold it against the film for not spending much time on the hostages as characters). The fact that these are human beings whose lives are genuinely at risk is never lost on Wanger or Siegel, and in fact one of the reforms Wanger proposed in his article was that prison guards be paid a decent wage, not a demand made by Dunn in the film, certainly, but nodded to all the same when a prisoner wonders how one of the guards can support a family on his salary and is told the guard works two jobs.

It's also interesting to me how the film depicts, or rather doesn't, the brutal beatings the inmates say they've suffered at the hands of the guards. One guard in particular, named Snader (Whit Bissell), is supposedly the worst of the bunch, but we never see him do anything. Wanger, Siegel, and Collins didn't make this up, but they don't show it -- the price of keeping things as brisk as they do, perhaps, since during the vast majority of the film's run-time, the guards are powerless. Whatever the reason, it avoids easily lazily painting prison guards -- and the number of sympathetic portrayals of such people in American films runs as high as six, maybe -- as nothing but brutes, though on the other hand it could also make the legitimate gripes of the prisoners seem less urgent. On this count, I also wonder at the intentions to show Dunn calling out the The Colonel, who is reluctant to participate in the riot in any capacity, partly because he's due for parole and will probably get it, for being selfish, and for thinking only of himself, and then later showing Dunn, having achieved some goals but getting the short end of the stick himself, betraying a great bitterness. This bitterness, if one were inclined towards a lack of empathy in Dunn's case, could read as the very selfishness he saw in The Colonel. He was willing to shame The Colonel into jeopardizing his own freedom, but can't take that kind of heat himself. Well, neither could I, probably, but I've also never murdered anyone, and so on. The film avoids none of this, though, and while it's difficult to know the intentions of the filmmakers when it comes to every little moment, those moments are in the film, and are a part of it.

In any event, Dunn makes his own best case when he points out to Reynolds that this riot wasn't an attempt at escape, but only for fair and reasonable treatment. It's hard to not see the implications of this fact, one of which is perhaps an understanding of Dunn's own guilt. I deserve to be here, but I'm not an animal.
Posted by bill r. at 12:56 PM

It's a while since I saw Brute Force, but I get what you're saying about it. The thing that really had me scratching my head was the prisoner's printing press and their little in-house newspaper operation. I don't know, maybe that's not an uncommon vocational-type resource some prisons offer their inmates, but it struck me as kind of odd.