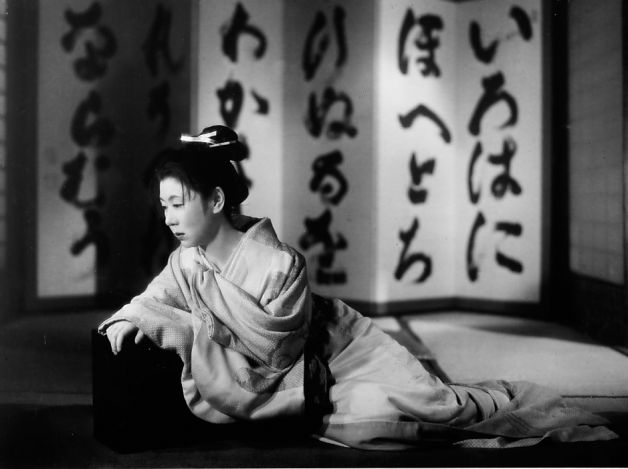 It's a phenomenon that I suspect is more common among great films than those on any other level of the scale, but often when watching a movie I consider great I will notice a brief moment, maybe just a second long, that locks into place why the whole is so successful, or best illustrates the film's tone, or something else along those lines. If I may pull from the group of films I have watched or re-watched within the last couple of days, there's a bit in Hal Ashby's The Last Detail where Jack Nicholson's Buddusky is playing darts, and gambling with the per diem money provided by the US Navy for the five days it will, or should at most, take him and Otis Young's Mulhall to transport Randy Quaid's Meadows from the Naval base in Norfolk, VA to a military prison in Portsmouth, MA. Mulhall voices to Buddusky his concern that perhaps the man with whom Buddusky is playing darts for money might be hustling him, and Nicholson's expression, while difficult to describe, conveys amusement, arrogance, offense that Mulhall should so underestimage him, and a weariness that he should even have to field such concerns. If this hilarious moment doesn't sum up The Last Detail, it certainly sums up Buddusky, who, anyway, is key to the whole thing, after all.

A silent reaction to words spoken, not to her but about her, flits across the face of Oharu, played by Kinuyo Tanaka, late in Kenji Mizoguchi's The Life of Oharu, which Criterion is releasing on DVD and Blu-ray tomorrow. I keep wanting to call this film The Fall of Oharu, probably because of Mizoguchi's series of "fallen women" pictures, and also because Oharu's life is the story of her fall. At the point in the film when the moment I'm revving up to describe occurs, Oharu has gone from a young upper-class woman whose love affair with a young man (Toshiru Mifune) who is beneath her standing, to a middle-aged prostitute, carried along the sluice of late 17th century Japanese propriety, the jaw-dropping penalties when that propriety is breached, and, occasionally, old fashioned bad luck and tragedy. But mostly it's just being a woman in Japan at that time which does her in, and Mizoguchi is elegantly ruthless about it all. Oharu can do nothing to extract herself. She fell in love outside of her class, so she and her family are banished. Her family's good name is ruined, so to earn money she must become a prostitute. She must become a rich man's concubine when his wife becomes barren, which might save her family, but her past ruins even that, at least somewhat remunerative, indignity. And so on, without ease. 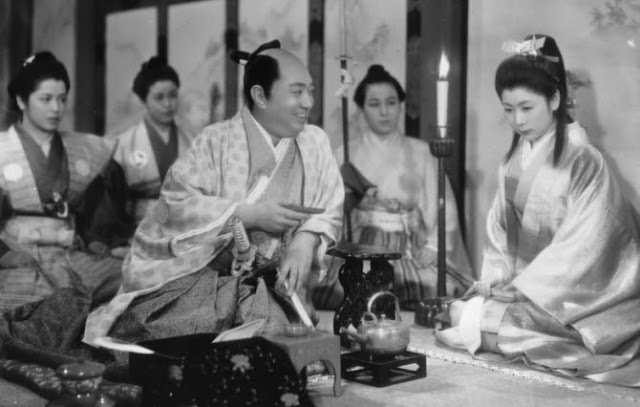 Eventually, without options and into her middle years, Oharu falls back into prostitution. One night she is taken by a man she assumes is to be her client for the evening into building, perhaps his home, where they talk for a bit, before it's revealed that the room she finds herself in is full of men, and the man is not a client, but a Buddhist pilgrim who has chosen Oharu to display to his fellow pilgrims as an incentive to not stray from their vows of purity. Telling the other men to look at Oharu, the man asks them if they still want to sleep with women. Mizoguch has placed his camera so that Oharu, embarrassed, is turned away from the men, but to the camera. The men line the wall to our left. Oharu faces the pilgrims only once, when asked to, and after that faces us. The first man goes on speaking about her as though she was deaf, and at one point -- and this is the moment in question -- describes her as a "goblin cat." At these words, Oharu lifts her head up and turns it slightly, and an expression of not just hurt but intense weariness crosses over her face. As if everything else wasn't bad enough, now I have to listen to this? And somehow not react to it? I must stay here, kneeling, and let them talk about me like this? The inhumanity of the moment is enormous, and, strangely, made worse still by the fact that it is entirely without malice. "Cruelty" is not quite the word, as this implies a deliberateness. But the pilgrims are merely upholding propriety. Oharu is merely an object lesson on the pitfalls of doing otherwise. That's all in her face.

Also fascinating about this shot is the distance Mizoguchi's camera is from Kinuyo Tanaka. Now you must forgive me here, and The Life of Oharu is not even my first Mizoguchi film; it's my fourth, if you simply must keep score. To be specific, prior to this I'd seen Ugetsu, Sansho the Bailiff, and, something of a left-field relative obscurity here, his four-hour The 47 Ronin. But that was all some time ago, and it wasn't until I watched The Life of Oharu that I noticed his positive phobia of close-ups. I've since gathered that this is actually part of Mizoguchi's whole deal, or was for a while anyway, but it was gratifying to be struck by it cold. But enough about me. The Life of Oharu is, of course, rife with the absence of close-ups, but it rang a particular tone at the moment when Oharu reacts to be called a "goblin cat," because I can't imagine another director, from the great ones to the shit ones, who wouldn't have either cut to her face, or let his or her camera drift to the right, maybe push in a little, something to highlight her, even if only slightly. Her face, at this moment, is in a sense the entire film in a one-second shadow, however, should we prefer to do so, we could look at the pilgrims instead -- Buddusky in that scene from The Last Detail may not have been in a strict close-up, but his face is pretty much the only thing we have to look at. And it's not as though Mizoguchi frames this shot so that Oharu is the visual equal of the pilgrims, but the viewer does have options. As Mizoguchi films it, there is a world apart from Oharu. There is a world that is, in fact, doing this to her. 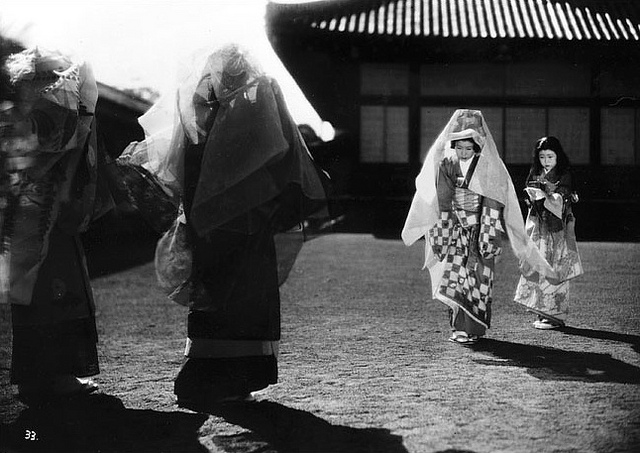 I'm tempted, or was tempted at one point while thinking all this over, to regard this aspect of Mizoguchi's style as generous, in that Oharu not only doesn't exist in a cultural vacuum, which is hard to miss, but the people around her have lives, too. After all, not everybody in this film apart from Oharu, is an appalling stooge of this society (although, Jesus, it's close) -- more than a couple of them are rather sweet, if helpless, or just as unlucky. But I don't think "generous" is the correct word. If you'll pardon me for this, I suspect a better word way to describe it is to say that it is simply honest. Why is Oharu in this position? Look around her. Given the placement of Mizoguchi's camera, you're free to. Then again, with that honesty comes a certain unavoidable generosity. Over the course of the film, more than once Oharu will return home in shame to her parents. Oharu's mother Tomo (Tsukie Matsuura) is hopelessly loving, but her father Shinzaemon (Ichiro Sugai) is close to hateful in these moments -- early on in the most extensive of these sequences, he actually shoves Oharu out of childish selfishness and frustration. But if the camera sticks close to anyone in this section, it's Shinzaemon. You may want to throttle the son of a bitch, but you also can't miss that his life has collapsed, too. So the equation regarding close-ups becomes clear: the fewer of them you have, the more of everything else you will see.

And once you've gotten your teeth into the concept that The Life of Oharu completely lacks one of the most basic shots in filmmaking, you can't quite let it go, and everything else in the film must be considered alongside it. Towards the end -- and I'll tread lightly here -- after the "goblin cat" scene, the film's climax occurs within a frankly magnificent tracking shot, during which Oharu's face must tell the story of her life even more starkly than in the shot described above, yet we see her much less clearly. (I would be remiss, by the way, if I didn't mention the score by Ichiro Saito, which is generally wonderful and here achieves an eerie brilliance.) The tracking shot is about ceremony, which the "goblin cat" was not, at least not officially. The tracking shot chronicles something official, though, and a futile attempt to make the ceremony recognize something other than itself. In a general way -- or maybe a very specific way, depends on your definition, I suppose -- Oharu is the victim of ceremony, and by putting her at this particular distance from the camera, it's rather striking how lightly she glances off what is proper in her society.
Posted by bill r. at 9:13 PM

I just Oharu on TCM, and was also struck by "goblin cat" scene. I googled it which brought me to your blog post. Your comments about the lack of close-ups is right on and it helped me put a pin on something that that I didnt realize before. Thank you