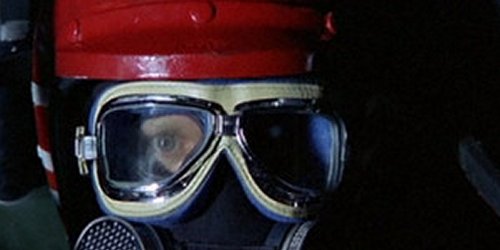 Back in the late 80s, David Cronenberg was tapped by Paramount to make a film about the rivalry between Formula One racecar drivers Phil Hill and Wolfgang von Trips. The film, which would have been called Red Cars, never happened, but if it had Cronenberg's 1979 funny car action drama (or whatever) Fast Company would be viewed now as less of an anomaly. Because taken as just a film among all his other films, Fast Company makes no sense. And granted, the Cronenberg of the 1980s, when he would have made Red Cars, was quite different from the Cronenberg of the 1970s, as would the Cronenberg of each subsequent decade, but at least "cars" would now be established as a thing in his films. Even though, yes, Crash would have to be Cronenberg's other "car" movie, and there are some pretty nifty car crashes in several of his other films (Rabid has an especially good one), but cars as cars have never been an obvious element. This despite the fact that Cronenberg's love of cars and motorcycles and racing is no secret, and that, say, the telepods in The Fly were designed by Cronenberg and based on the engine of his Ducati motorcycle. 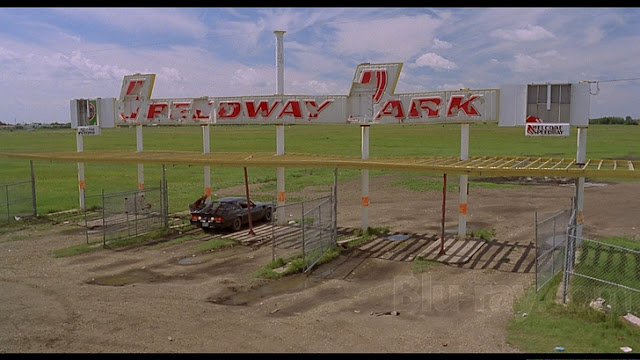 And in fact, in David Cronenberg: Interviews with Serge Grunberg, Cronenberg admits that he made Fast Company, which was brought to him, rather than originated by him, for the money, to support his family, and to further establish himself as a professional filmmaker. But he also says:

...I loved the subject matter and I also got into the idea of making a real B-movie, which normally wouldn't be an attraction to me. But I had John Saxon and I had Claudia Jennings and I had William Smith, so I got excited about that.

Meanwhile, in Cronenberg in Cronenberg, even though he acknowledges Fast Company as his least personal and the film in which he had the least emotion invested, he says this:

What I like most about [Fast Company] came out of my appreciation and understanding of race cars and racing machinery, which I get very metaphysical and boring about. Secondly, it really did spring out of me. I knew about racers and raced myself. I got the drag racers' particular version, which is very much a beer-drinking, wet T-shirt thing. They even had T-shirts that said "Suck my pipes": a great phrase. I made sure I got that in. Great stuff. Not my sensibility, but definitely theirs. I was doing a bit of documentary film-making with that movie. I was reading those Hot Rod magazines and was ready to build myself a hot Camaro. So I wouldn't disown one frame.

Which is what, finally, is interesting about Fast Company. The aspect of cars and such about which Cronenberg says he can be metaphysical and boring about is not really present in the film, though there are some shots from within the car, with the driver -- who, even though we know which character it is in any particular shot, is masked and helmeted and faceless and could be anybody -- dealing wordlessly with mechanical issues, that could, if you chose to go that far, be read as having something to do with an individual's separation from everyone else, and with the car as the body, and other things that, and here I agree with Cronenberg, are boring. And anyway, you have to decide that stuff's there; I don't actually believe Cronenberg was actually interested in putting it there. What Fast Company is, is what it seems to be.

Plus, it's good. This surprised me, watching it a second time. The first time I saw it, I think I was simply dealing with its very existence as a David Cronenberg film, one that had a theme song ("You're livin' in the heat!"), and other songs sprinkled around in there ("We'll go rockin' in the moonlight...we'll go rollin' into daylight!"), one that contained shots like this: 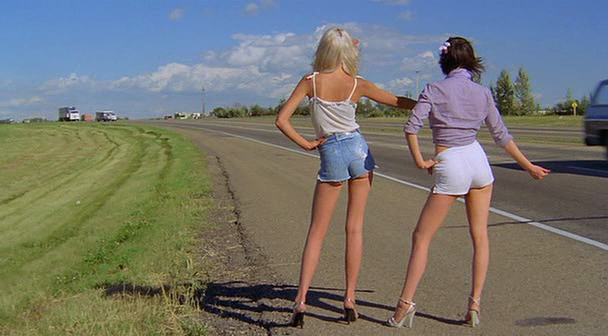 ...and had some lame jokes that were only there because such jokes were expected to be in a film like Fast Company. And I couldn't wrap my head around it, coming to it so late in my experience with Cronenberg. To put it in perspective, the last two Cronenberg films I saw for the first time were Cosmopolis and Fast Company. So there was a whole career there for me to deal with. There are a couple of jokes stacked on top of each other, about two-thirds of the way through Fast Company, that are so bizarre when compared to the rest of his films as the sexually aroused insect typewriter in Naked Lunch is to the rest of human existence. But it's a good example of the kind of film it is, which sounds patronizing, though in truth I was quite pleased to be sitting there watching this movie about an aging star drag racer named Lonnie Johnson (William Smith), whose race team is sponsored by a motoroil-and-such company called FastCo. FastCo's rep is Phil Adamson (John Saxon), a corrupt man, who will work against Lonnie, Lonnie's team, and FastCo itself, for extra cash and power. Adamson forces Lonnie into taking a major race away from Billy Brooker (Nicholas Campbell), an up-and-coming young funny car racer on Lonnie's team. The resulting animosity causes Lonnie to publicly humiliate Adamson, and, later, when Adamson insults Lonnie's girlfriend Sammy (Claudia Jennings), punch his lights out. This in turn leads to more Adamson skullduggery, and an attempt by Adamson to bring Lonnie's rival, Gary Black (Cedrick Smith) into the FastCo fold. But that's just the tip of the iceberg, and Adamson is, it turns out, willing to go very far indeed.

The upshot of all of this is, Fast Company is a fun movie. There is not, I don't believe, a great deal to dissect about it, on the usual Cronenberg level. William Smith is quite good -- Cronenberg points out that as originally written by Alan Treen, Lonnie was like a character out of a Saul Bellow novel, which was both wrong for the racing environment that Cronenberg knew, and wrong for William Smith, who had been cast by then. So Cronenberg, who has a screenwriting credit, changed that. Smith plays a man who seems authentic. A good racer, a nice guy, not especially intriguing as a person, which in my view is one of the things that's intriguing about the film. More intriguing is John Saxon's Phil Adamson. Here's what's interesting about him. At one point, he goes into a pool hall to talk to Gary Black. Black is shooting pool with a guy from his crew. Adamson asks the other guy if he'd mind getting scarce for a minute, and the guy says yeah he does mind actually, and talks some sass to Adamson until Black says it's okay, take off for a minute. Another time, Adamson orders a woman under his employ to seduce Lonnie, and she refuses. He says if she refuses, then she's fired, so she says "Then fire me," and walks off. Cronenberg holds on Saxon at this moment, and while Adamson doesn't throw a fit, Saxon's expression, which is kind of blank, reads to me as the face of a man thinking "Goddamnit, why doesn't anybody do what I tell them!?" 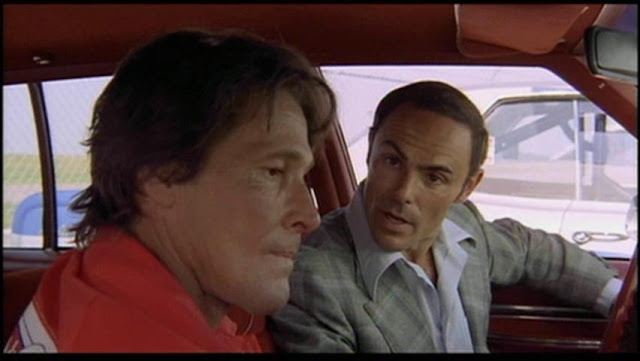 He really is a wonderfully powerless and disrespected villain. This is not to say that at no point does he outsmart Lonnie, or win temporary victories, but pretty much everybody hates him, nobody gives a shit about what he thinks or says or threatens them with. He's just a fucking snake and when he's gone another snake will be let loose in his place. That snake might even be better, because he could hardly be worse. And Saxon, like I even need to say it, is wonderful. He's one of those seemingly effortless talents, who can sketch in a lot just with the way he looks at somebody. There's another scene where Adamson walks in on an intimate moment between Sammy and Lonnie. Adamson didn't used to be married to Sammy, he doesn't even know her as far as we can tell, but the look on his face is one not just of embarrassment, but of sadness. I don't think I'm reading too much into this. But the thing is, as I've said, everybody hates Adamson, and he knows it. He's alone. Because he's an asshole, but that doesn't make being alone any better. It's there on Saxon's face. I'd swear it is.

The ending of this film is slightly nuts -- and Lonnie has a moment that is meant to be a crowd-pleaser, but I couldn't help thinking how appallingly reckless it was, but as it turned out this is just a movie -- in a way that's both ridiculous and quite enjoyable. It's fitting, anyway, if only barely. Where you end up on the other side of Fast Company is a good, professionally made B-movie. Precisely what Cronenberg set out to make. He never gets metaphysical or boring about cards, but my, it could have been interesting if he had. Or if he'd been able to make Red Cars, which I think would have brought out the boring metaphysical side in the most glorious way. That didn't happen, so he made Crash. I think that's how this all connects up. In any case, Cronenberg was about to, or was going through, a very difficult personal upheaval at around this same time, and the film that came out of it all is, well...it's not about drag racers.
Posted by bill r. at 10:27 PM

One of the very few Cronenberg films I haven't seen. Despite this great review, I really have no interest in it. Don't tell John Saxon.

But it's pretty good though.