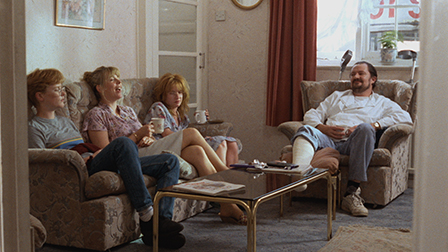 Mike Leigh's 1990 Life is Sweet is a film I've a felt a strong urge to see for quite a while, since 1999, to be specific, when Topsy-Turvy came out. That film, still my favorite by Leigh and one of my favorite movies period, among many other things I loved about it, did me the favor of opening my eyes to the greatness of Jim Broadbent. Prior to Topsy-Turvy, I knew Broadbent as the large, somewhat ubiquitous British character actor who often played goofy, sometimes strange, even grotesque characters in films like Time Bandits and Brazil. I liked him, I thought he was funny, but I had him pegged as purely an oddball, who might have had some other kind of career going on, but I didn't know about it, and I made no steps to learn about it, either. Then Topsy-Turvy came out, and in a film just busting at the seams with great performances, Broadbent as William S. Gilbert, of Gilbert & Sullivan, stood out for me, for the first time, as an actor possessed of true genius. All that means is that I now think he's a great actor, but certain actors can give a performance, or a series of them, that hits buttons you don't know you have, and the inexpressible nature of the impact that performance has on you can lead you to do things like call them "a genius." This is acceptable, I think, and nice for the actor, should they ever learn of it. But to give you some idea of all this, the moment in Topsy-Turvy that hits the button for me is when they're rehearsing the song from The Mikado which is sometimes referred to as "The Mikado" or "A More Humane Mikado." The song is performed in the film by, of course, the actor playing The Mikado, Richard Temple (played in Topsy-Turvy by Timothy Spall) and, anyway, the point is he's performing it, and Leigh keeps cutting from the stage to Broadbent's Gilbert watching from the arena, and he's clearly not happy. He's smoking a cigar, and eventually he goes over to a table, makes himself a drink, and with the hand holding the cigar, picks up his tumbler, takes a drink, looking over the glass and the cigar with something close to quiet contempt for the song he, himself, wrote. I love this moment beyond reason, and can't explain its power over me. But it's Broadbent. That much I know for sure.

All of this led me to looking into both Broadbent and Mike Leigh, which led me to Life is Sweet, an earlier Leigh film in which Leigh has another starring role, and this further led me to the discovery that Life is Sweet was not, at that time, easily available in America, at least not to me. It existed, but the Fates had set it up so that I couldn't rent it. In the meantime, Broadbent's career has enjoyed a very nice boost, and he's now more ubiquitous than ever, God bless 'im. Leigh, too, has since been recognized as a Major Filmmaker, and we now have as a result of those and other factors today's release, by Criterion, of Life is Sweet on DVD and Blu-ray. And so now I've seen it, and a delightful and moving film it is, with more at its center than Broadbent, which is both entirely fine by me and to be expected. Broadbent plays Andy, a working class chef who lives with his boisterously cheerful wife Wendy, played by Alison Steadman, and his twin daughters, the straight-arrow professional plummer Natalie (Claire Skinner), and the bulimic, sneering, affected radical punk Nicola (Jane Horrocks). The plot, such as it is, is driven by a few things, such as the effect Natalie's personality has on her family, and what, for instance, Wendy's boisterous cheerfulness masks in the face of her daughter's withering nonsense. Also, there's Andy's friend Patsy (Stephen Rea), who tempts Andy with the promise of self-sufficiency with the offer to sell to his friend an old lunch wagon. Then, too, is friend of the family Aubrey (Timothy Spall), a strange man who projects an air of such unearned confidence that is entirely at odds with the way he stumbles through his early scenes, that it's reasonable to assume -- incorrectly, as it will turn out -- that he suffers from some kind of mental disorder. But no, he's getting ready to open a restaurant, and is hitting a series of snags as the big day approaches. One of those snags will be unsnagged by Wendy's decision to go to work for Aubrey as a waitress.

This is a curiously foodless movie, given the above. It's not exactly Big Night, nor is it even The Van, either the Roddy Doyle novel or the Stephen Frears adaptation of same, which I remember had at least several more jokes at the expense of what Jimmy Rabbitte was serving to the soccer fans spilling out of the pubs after the game (there's a little bit of that here, too, but not as much as you might expect). When you consider Nicola's bulimia, which is not there as a source of humor, maybe there's a reason for this I'm not seeing, but what I'm seeing is that here food is part of the everyday, and the everyday is what Life is Sweet is about, and part of the whole deal with the everyday is that usually people don't make a big deal about it. None of which is to suggest that Life is Sweet is so casually slight. The film's a comedy, and not really a dark comedy, but Leigh would never say it doesn't matter.

As a matter of fact, if there's a dramatic payoff in the traditional sense, to any of this, it's not for any of what we might regard as the "everyday" elements. The lunch wagon subplot is kind of hilariously unresolved (hilarious if you think of these things in relation to other movies, and what's "expected"), and Andy's big dramatic climax is when he suffers a minor ankle injury. No, it's the bent nail, Nicola, the punk bulimic (she's the one character to whom food, as food, matters, in a horribly skewed way) who spends much of the film mocking and denigrating her family. She does finally have a big showdown with her mother, and it's all hugely effective. This in spite of the fact that I largely found Horrocks' performance to be a grating, shrill cartoon. It's not that you're not supposed to get that from what Horrocks is doing here, but "shrill" and "grating" don't need to read as a bad performance. Interestingly, the film is largely a comedy, yet Horrocks, who at this point was just a couple of years away from achieving cult immortality with her role on the British sitcom Absolutely Fabulous flounders in Life is Sweet primarily on comedic grounds. Not that the lines Leigh gives her (or she gave herself; I'm still not clear how Leigh's scripts work) are superb -- she just spits disdain at everyone completely at random and for no good reason, and ends conversations by saying people are fascists -- but any of the natural, lived-in ease and humor that Broadbent and Skinner and Steadman achieve (and to be fair, I think Spall, a terrific actor, flails a bit, too) feels outside of Horrocks' grasp. It's only when the film becomes quite serious for a few minutes that Horrocks is able to make Nicola seem real.

And even then, it's Alison Steadman who steals it. Steadman is really the stealth lead of Life is Sweet, and as good as Broadbent, the main reason I wanted to see the film, is, it's Steadman's work that I found eye-opening. Wendy's anguish and frustration and pure anger, something actually close to hatred, in her showdown with Nicola is painfully cathartic. No one has really fought back against Nicola to the degree that I, at least, though she deserved, and Steadman plays it exactly right. As I said, at this point she almost hates her daughter, and that pours out. But we know, and Wendy knows, what a sick, unhappy, mess Nicola really is, and the scene as written has all of it, everything, wrapped up in an argument whose words don't rise above what people in this situation would actually say to each other. "Keenly observed" is the kind of phrase they have for this sort of thing, but I've never thought that quite covers it. "Deeply understood" is maybe closer, if still not quite there. But it's what Leigh is great at, when he's great, and what his actors are able to seemingly walk in and just do. No characters are more fully lived than those in Mike Leigh's films.
Posted by bill r. at 1:47 PM