There Is No Other Way 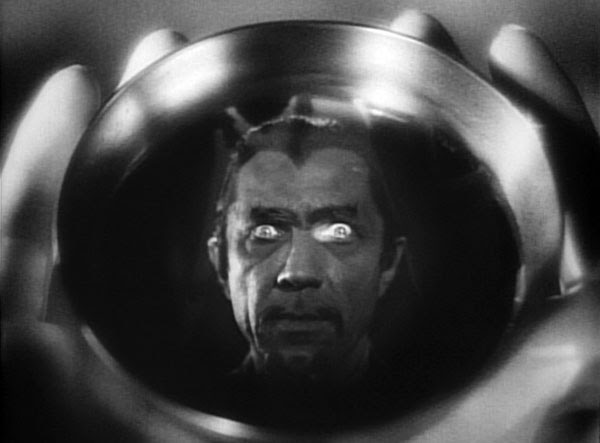 If your first viewing experience of White Zombie, Victor Halperin’s 1932 voodoo horror classic starring Bela Lugosi, is through the recent Kino Blu-ray release, then brother or sister, you don’t know what a gift you’ve been given. I first saw the film a few years back, from a Netflix copy of one of the many, many bootlegs that have been circulating for decades, bootlegs of prints that have been stomped on, crumpled up, had cigarettes put out on them, and probably also peed on. The image and sound were both so bad that I found this brisk, atmospheric, and thoroughly enjoyable 69-minute film kind of tough to sit through. Well, I’ve watched it again now on Blu-ray, and the difference is something close to the neighborhood of jaw-dropping. And by the way, if this disc does provide you with your first viewing, you should know that it contains two transfers: one is the as-pristine-as-we’re-probably-ever-gonna-get version I watched, and another that is described on the box as “raw.” Having not had a chance to look at that one yet, I couldn’t tell you precisely what you’d be in store for with it, but I’d have to guess even that one looks better than any previous video release, or “video release,” of White Zombie up until this point.

As for the film itself, well, what’s not to like? It’s quite basic, plot-wise, as you’d both expect and hope from a film that’s barely more than an hour long. You got your dewy couple, Neil and Madeleine, played by John Harron and Madge Bellamy, who are about to get married in Haiti, and plus Neil is set to take a job offered by Beaumont, a wealthy plantation owner played by Robert Frazer. What they don’t know is that the plantation owner has his eyes set on Madeleine, he loves her desperately you see, and he’s been in contact with an evil wizard or witch doctor or something named Murder Legendre, played by Lugosi, who uses some mysterious potion to, he claims, raise the dead – turn them into zombies – and make them do his bidding. Probably before going any further, I should point out again that Lugosi plays a character here whose first name is “Murder.” I don’t recall anything in the film that implied this was a boyhood nickname, which means his mom probably held her freshly born son in swaddling clothes, close to her breast, beaming at this new life she and her loving husband had created, and said “Let’s call him Murder!” Or it was from a baby name book or something. Either way, I can practically hear the schoolyard taunts: “Haw haw haw, yer name means to deliberately and maliciously take the life of another human being! Haw haw haw!” “Aw geez, lemme alone, you guys!” Etc. What chance did he have, is my point.

So, Beaumont conspires with Legendre to feed some of his zombie poison to Madeleine, which they succeed in doing. Hence, she is the “white zombie,” Legendre’s other zombies being native to Haiti. As I say, it’s all very brisk and to the point, and quite beautifully shot. Or it alternates between ordinary, let’s-get-this done shooting, and atmospheric beauty. Check out, for instance, the classic camera move through Legendre’s mill, populated entirely by blank-faced and silent zombies, which is about as good as this sort of thing gets, by which I mean it’s great. And while Frank Thompson, who provides a commentary track to the Kino disc, is kind of down on all of the acting in the film that was not provided by Lugosi, I think he’s being a touch unfair (a line is flubbed by John Crawthorn in a scene with Harron, and it's rolled with by both actors, which at the very least shows professionalism). Frazer’s rather good, I think, and one of the best scenes in the film involves Frazer and Lugosi sitting at a table, late in the film, and…well, this is sort of a turning point in the story, but suffice it to say, Frazer’s asked to sell something very specific here, and he sells it. Lugosi, too, and the thing about Lugosi that I find interesting is that he was frequently at his best when he was in extremis. That can mean in the emotional high-wire sense of, say, the end of The Black Cat, or it can mean the very far end of the scale of evil, which he’s at least very close to here, in his role as a voodoo witch doctor named Murder. In all honesty, I don’t tend to think very much of Lugosi – in my experience, his performance in Bride of the Monster isn’t a far cry from the work he put into most of his films. But in these early days (and in his rather sad performance in The Body Snatcher, which is a different sort of thing), he could do evil without breaking a sweat. If Karloff’s villains often had a moral complexity to them, even just a smidge, Lugosi was more likely to play a fairly uncomplicated form of horrible, and he did so with a lot of confidence, and if not actual glee, then at least a fair enough simulacrum. One of the results of this kind of performance by Lugosi is that it’s that much more satisfying for the audience when whoever Lugosi’s play has that smug, satisfied, blood-sucking grin wiped off his stupid evil face. Which is bound to happen eventually.

White Zombie is also, of course, known as the first zombie film, or anyway the first zombie film anybody knows about. As everybody knows, these zombies, and also the zombies in Lewton and Tourneur’s I Walked With a Zombie, and others, are closer to the traditional, and original, voodoo zombie myth than what we all now automatically think of when we hear the word “zombie.” I’m still unclear how it happened, that Romero fully intended his creatures to be called and thought of as ghouls, because eating the flesh of the living is the kind of thing that ghouls do, but now they're called zombies anyway, even though eating the flesh of the living is NOT the kind of thing that zombies do. As a result, the voodoo zombie film is pretty much finished, outside of a few shots here and there, most prominently by Wes Craven with The Serpent and the Rainbow. This is a shame. Thanks a lot, nerds.

I really didn't feel Lugosi managed evil in The Body Snatcher, for whatever reason. His part felt like an afterthought, some stunt casting to get the Karloff-Lugosi pairing on film one last time. Bela wasn't doing well by TBS and it shows.

He is in his strange little prime in White Zombie, though, and it's a sexy performance despite those eyebrows. This is one of my favorite films, and I'm glad it's out on DVD as well, as I need DVD because I'm a Luddite or whatever it is people call you when you won't buy a Blu-ray player.

I happened to put WZ on 1.3x speed a couple years ago and discovered at a slightly faster speed, it looks very much like a late-20s European silent, especially early on when Neil and Madeleine are in the carriage.

I didn't mean to imply that Lugosi was playing "evil" in THE BODY SNATCHER, just that it was a good, if sad (for several reasons) performance.

And you touched on something I meant to bring up, but completely forgot about, which is that WHITE ZOMBIE feels like it wants to be a silent film, and the only reason it isn't is because silent films were just about finished, and the Halperins knew they had to keep up. There are long silent stretches, like the zombies working in the mill, that are really the film at its best.

"Ghoul" means a monster that eats dead bodies. The zombie idea, a dead body brought back to a mindless parody of life, is much closer to Romero's creations, which, of course, differ in a few interesting ways from the traditional form.

Added to that, "zombie" is just a much catchier word, and whatever Romero's original intentions might have been, he was already referring to the things as zombies by the first sequel. So... nyah, nyah, nyah, I guess.

Thanks for writing in such an encouraging post. I had a glimpse of it and couldn’t stop reading till I finished. I have already bookmarked you.
Estetik