Well, there's no reason to be completely. I've decided to drop a word or two on what I'm reading until blogging activities are back to normal. Currently, I am reading this: 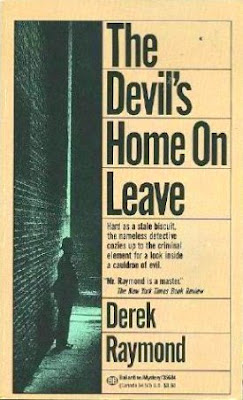 Women in the place looked at Billy admiringly, taking him for the spruce young businessman with the executive briefcase that he appeared to be. They couldn't know that within less than an hour he would be stripped naked, carefully removing and preparing everything that he had in his case. The couldn't know what he had in it.

The Devil's Home on Leave is the second in Derek Raymond's series of "Factory" crime novels, that center on a nameless police detective who works in the Unexplained Deaths, or A14, division. The first novel, He Died With His Eyes Open was a despairing little number which set up our hero as England's, or the world's, lone idealist. Raymond, who passed away in 1994 a gaunt, morose-looking man whose crime fiction had been driven by his own encroaching misanthropy, sets up his moral contrasts rather too sharply at times, but so far The Devil's Home on Leave, which finds the detective investigating a murder where the victim was found dismembered and boiled in various plastic bags, thoroughly outstrips its predecessor in terms of narrative propulsion and bleak psychology. Raymond really piles it on, making it even more alarming that the fourth "Factory" novel, called I Was Dora Suarez, has a reputation as one of the most shocking, most unshakable crime novels you're likely to read. We shall see.
Posted by bill r. at 2:17 PM

Labels: Derek Raymond, Off the Shelf, The Devil's Home On Leave

Good choice. It'll be interesting to see what you think of DORA SUAREZ. It's not a "well-built" book by any means, but its empathy for human suffering makes me forgive its weird shifts in narrative POV. Hope you don't end up denting a wall with it.

I finished HOME ON LEAVE. "Well-built" it isn't, nor was HE DIED WITH HIS EYES OPEN. I've found both books pretty frustrating, but I liked both for the same reasons you say you liked DORA SUAREZ. They're weird, clumsy, ramshackle books, but man are they deeply felt.

Deeply felt, absolutely spot on. I was concerned when I saw on Twitter that you were reading this, bill, because I like it a great deal and look forward to your opinion on things, but wondered if it might not push your buttons. It might be too British, too parochial, too messy (structurally). I remember, even as a supporter of the man, laughing aloud at the showdown scene in EYES OPEN because if you had a blast of reality and looked at it as it would have happened, it would be absurd and comical. And he falls down at those moments. But it's not about that; that book is about the tapes Staniland makes and the Detective's resonance with that. The deeply felt aspect is extraordinary during those moments where he's simultaneously repulsed and fascinated by Staniland's failings. DORA SUAREZ, well now, I await the response to that one with interest.

Well, it DOES push my buttons, in all sorts of ways. I very much appreciate -- I hesitate to say "enjoy" -- this kind of despairing tone in crime fiction, and usually it comes off as a pose, or phony in some way, but not with Raymond. What I liked somewhat less is the way he pushes the cop as the One Good Cop in the department, and, almost, out of all cops everywhere ever. The way Bowman is presented as not just a bastard, but a hopeless idiot who can't even hold his own in regular conversation with the cop (don't know what else to call him) sort of grated. Mind you, I'm perfectly fine with Bowman being a prick, but he's set up only to be very easily knocked down, repeatedly, and not very interestingly. Also, the wiseass talk...Raymond wasn't too polished at that, was he?

But I find the books fascinating all the same. I'm in for the long haul, or at least through DORA SUAREZ. I will be reading that one, you can be sure.