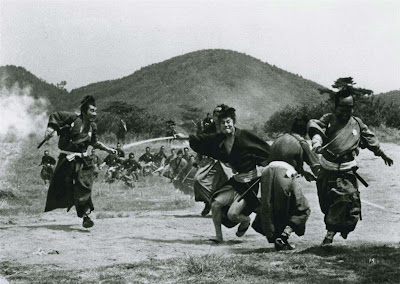 Lessons can be learned from Hideo Gosha's Three Outlaw Samurai from 1964, which is being released by Criterion tomorrow. Many of these lessons could probably best be applied to making action films, though I'm of the opinion that they could be applied, in perhaps a more general sense, to a variety of genres, because if Gosha's narrative philosophy here could be reduced to one word, it would be "headlong." Three Outlaw Samurai, a film about the titular samurai one by one finding their moral compass which will point them towards a peasant village that is desperately seeking to end the callous tyranny of a corrupt magistrate who is making their lives hell, begins precisely at the beginning. It opens with a wandering samurai named Sakon Shiba (Tetsuro Tamba) stumbling immediately upon the core group of peasants -- led, if that's the word for his sweaty panic, by an old man named Jinbei (Kamatari Fujiwara) -- and their newly acquired hostage, the daughter of the magistrate. Shiba makes sure that these men have not mistreated the woman, beyond the kidnapping, before deciding that he will help them. This all transpires within the first five minutes, and our story is underway. 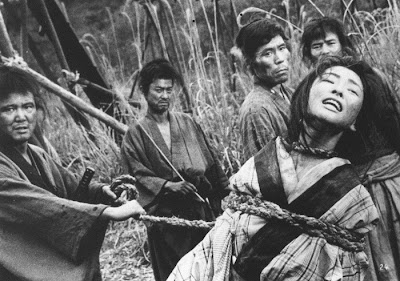 At 93 minutes, Three Outlaw Samurai displays a gratifying efficiency throughout. It is not the only method for such a film, of course, but it is a style, one that seems to be dying. Look at the turn taken by the character Sakura (Isamu Nagato), the second samurai to join Shiba's mission. Sakura was hired, sort of, by the magistrate to assist in the killing of these peasants, but when faced with the full story behind the peasants' motives, Sakura turns back to his masters, following a lightning-fast glimpse of action, and says "I quit." Before this, Sakura's central struggle has also been set up, when a clumsy peasant, knowing who he works for, attacks Sakura in the dark, only to have Sakura cut him down in an instant. The death of this innocent peasant will weigh on him and drive him to good decisions and bad for the rest of the film (Sakura would have been played by Toshiro Mifune if Kurosawa had been behind the camera on this one). From Sakura's introduction to "I quit" takes up, what...? Maybe six minutes?

I'm reminded of William Goldman's breakdown, in Adventures of the Scree Trade, of the ending of Hitchcock's North By Northwest, and how Hitchcock and screenwriter Ernest Lehman get across loads of information, everything from the defeat of the villains, to the eventual marriage and honeymoon of the heroes, in forty-three seconds. It's a marvel of storytelling economy, and so, in its way, is Three Outlaw Samurai. This economy translates to the film's action scenes, as well. The fights in Three Outlaw Samurai, and this is not atypical of samurai films from this era, are all frenzy and chaos. The brutality is expressed not through geysers of blood but through speed. In one ambush scene, two characters are killed literally within a second of the attack beginning, and this is the shock, not the arterial spray, of which there is none. Compare this to Takashi Miike's recent 13 Assassins (a film I loved), which extends its primarily battle scene to about half of the film's total length. And also it puts some geysers of blood in there. In Miike's film, the fight choreography is excellent, and noticeable. The fight choreography in Three Outlaw Samurai is entirely invisible. You know, as you watch it, that the film's big climactic fight must have been planned with some degree of meticulousness, but it plays as total mayhem. This paroxysm of flashing swords helps mask the unlikeliness of three men fighting back dozens of attackers by making it all appear somehow possible. Because it's fast. You see three men rapidly fall to the sword of our third outlaw samurai, Kikyo (Mikijiro Hira), and you don't think "Oh, how could he do that!" but rather "He's one fucking good samurai, that guy." 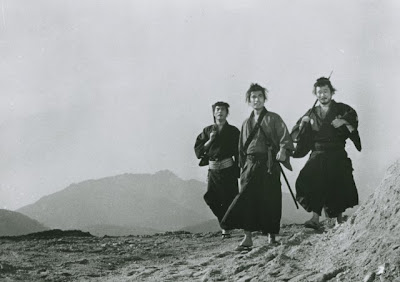 But, as I've said, there are many methods. Two years later saw the release of Kihachi Okomoto's The Sword of Doom, a film that ends with a battle that somehow manages to be shaggy and shambling but still crazed, mirroring the fuzzy-brained psychosis of its lead character. But Three Outlaw Samurai is bracing in both its narrative and violent speed -- it's clear-headed, assured, confident, and rousing.
Posted by bill r. at 1:38 PM