Very Brief Thought #1: From what I can tell, Rod Lurie walked away from Sam Peckinpah's controversial 1971 film Straw Dogs with the sole thought that Peckinpah must have really had some pretty significant beefs with rural England, a position, while oddly specific and seemingly incongruous when coming from a very Old West-focused man from Fresno, CA, that was not unlike Lurie's own sniffing, self-righteous disdain for the American South. That's my guess anyway, because in Lurie's remake of the Peckinpah film the whole idea seems to be that the South is pretty fucked up, and has it coming. What Lurie seems to have failed to notice about the original movie is that Peckinpah's English village of Cornwall isn't overly specific -- Peckinpah includes what you might expect, such as pubs and pints and some hunting and little details of small-time life, but there is nothing there to imply that anyone is meant to think "This is what all those places are like." Lurie's South in his Straw Dogs, however, includes, yes, hunting, and also high school football and revered ex-coaches and church before football, and of course religious hypocrisy, casual racism -- in short, everything people who aren't from the South think are the only things Southerners do or have or talk about. And Lurie wants you to know he's not afraid of it. Or not anymore. 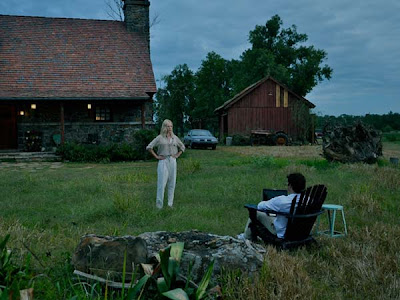 Very Brief Thought #2: James Marsden plays David Sumner in the remake, smarty-pants city boy who has moved from Liberal City with his wife, back to her backwoods hometown in search of peace and quiet. This time around, David is still an intellectual, but in keeping with our theme of Hollywood self-absorption, he's not a mathematician -- because writing about math is sort of hard -- but a Hollywood screenwriter. He's writing a film about the Battle of Stalingrad, so that's pretty intellectual I guess. This leads to some of my favorite moments, such as the idea that the battle took place in 1943, but ignorant people think it was 1944 (actually the bulk of it took place in 1942, but never mind). Even better is when David looks up at Amy (Kate Bosworth) and happily announces "I've figured out how to get Khruszchev in on the action. He's going to be Yuri's friend." Yuri, presumably, is the hero of his screenplay. So his big idea to make Khruszchev a part of his film is to just make him the main dude's friend. And how long did it take him to come up with that? Regardless, I smell Oscar. 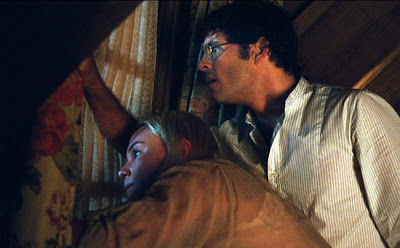 Very Brief Thought #3: Speaking of religion, and Russia, at one point, Charlie (Alexander Skarsgard), who is the main villain here, the former beau of Amy and head of the roofing crew David hires to patch up their barn, asks David if he doesn't think that God had something to do with helping the Soviets win the Battle of Stalingrad. David wonders at the absurdity of God helping an atheist country. This is about as far as Lurie's theological thought is able to take him. And following Lurie's metaphor to its logical conclusion, if David is the far-Left atheist under siege, then Southerners are Nazis. 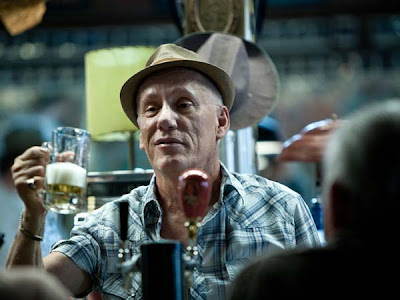 Very Brief Thought #4: I happen to like James Marsden. If a good remake of Straw Dogs could have been made, or if Straw Dogs had never been made in 1971 and it was being made, and made well, for the first time now, I would see no reason not to cast him in the lead. Based on seeing Lurie's film, I still think that. And I used to think I liked James Woods, too, but after watching this film I'm not so sure about that anymore. 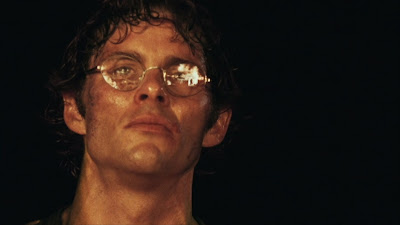 Very Brief Thought #5: It had been my assumption, going into this remake, that Rod Lurie would skitter, like a tiny kitten startled by a wind-blown leaf, away from all of the original film's highly uncomfortable elements. Peckinpah's film is one of the few films genuinely built to work on an audience's beliefs like they were a bundle of raw nerves. Any time you think you can comfortably find your spot within the film's morality, Peckinpah rubs your nose in the part of the mess you forgot you had to contend with. My confidence in Lurie's cowardice is based on having seen Lurie's 2000 film The Contender, which is one of the most snivelling, weak-willed pieces of self-righteous horseshit I've ever seen. You can practically see The Contender nervously straightening its tie as it tries to figure out how to get away from all the things it's said that it now wants to take back. It's so cowardly that it bleats on about how a vice presidential candidate's college sexual experiences are immaterial to their ability to serve in that office, and then assures the audience at the end that, don't worry, we thought all that sex stuff was pretty gross too, don't worry, she didn't really do that. If she had, she should still be vice president, but isn't it better to know she didn't? We can congratulate ourselves for not caring one way or the other, but at the same time we don't have to picture it.

So. But much to my dismay, in Straw Dogs Lurie does not entirely flee from what Peckinpah hath wrought. He flees from it enough to make a difference, but, for instance, David is still kind of an asshole. He's still in denial about his own fear. Lurie does recreate the rape scene, and if you squint hard enough it might make you uncomfortable in the same way Peckinpah's did, sort of, almost. Jeremy (Dominic Purcell), the mentally handicapped man who is ordered to stay away from young girls, does actually, accidentally, kill the young girl, which sets up the whole ending siege. One notable exception in all this is the complete rounding off of Amy. The rape makes her angry, and David still doesn't know about it, but her anger and fear doesn't lead her to want to chuck the handicapped guy out to the wolves. The furthest Lurie is willing to go by way of making Amy somewhat prickly and human is to have her ask David why he won't give Jeremy over to the rednecks. He tells her why, and she says okay. The tension between David and Amy during the siege, which in Peckinpah's film has the effect of separating David from everybody, including those he's trying to protect, is completely gone. Lurie portrays a household defending itself, instead of Peckinpah's one man scratching and clawing and clubbing everything he sees and once believed in. So in Rod Lurie's movie, a lot of the same things happen. But who gives a damn? 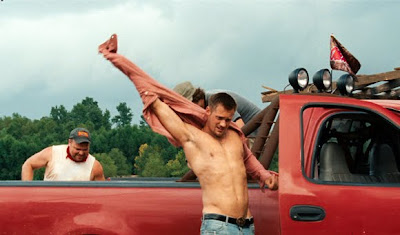 Very Brief Thought #6: The part where Rod Lurie actually has poor James Marsden use, and explain, the phrase "straw dogs" is one of the shit-stupidest things I've ever seen.
Posted by bill r. at 1:08 PM

At some point I had intentions of seeing this in theaters, but after reading your last Very Brief Thought, I'm glad I abstained since that scene may have caused me to break someone's eye glasses.

I was in another room, getting a snack or something, and I heard the words "straw dogs", and I immediately snapped to attention. I couldn't believe what was happening. It almost made the whole thing worth while, in a perverse sort of way.

If this further entices you at all, the analogy has to do with high school football, and China.

You've nailed where this remake went wrong and became just another turd.

If Lurie was going to change the character's occupation, he should have changed the name, as it was a mathematician named SUMner. Plus, the dynamic is lost when you replace short, and not Hollywood handsome Dustin Hoffman for the more conventionally tall and handsome James Marsden.

If you haven't seen it, Enemy at the Gates is a pretty good film about Stalingrad, with Bob Hoskins as Khrushchev.

Apologize for the posting, but am working my way through your archives, and wanted to vent about this movie. Your post was an excuse to do so.

I knew that the movie had missed the point the second I saw the poster for it. The original poster art is, to my mind,a stunning piece of work. I honestly consider it one of the most striking graphic works ever used on a one sheet, with its flat, grainy picture of Hoffman's face with the broken glass superimposed, actually shattered, on top. There's something even slightly absurdist in the image, catching the glass in a moment of explosion with no effect on the man supposed to be wearing them. No slogan, no tagline, just a gigantic ugly picture of Dustin Hoffman.

A quick point, perhaps why I value this work so highly, is back when I was a rather younger man, it was this image that made me pick up the film in the video store. I wasn't even properly a film fan at this point, I think my favorite movie, the one that blew me away out of my socks, was Gattaca. Therefore, none of its many charms drew me, none of the names involved, even Hoffman's, who I knew but really didn't care about, gave me pause to pick up the video cassette. It was that image that made me put down my 3.50.

So, when I saw the remake poster, I found the thrust of your complaints reflected in it. The basic image is there, James Marsden is in black and white, he's wearing glasses, and they're broken, but all the details that made the original great are missing. First of all, Marsden is photographed with that Hollywood camera known as photoshop, so his skin is both preternaturally smooth and also blue. Then, the glasses are just cracked, which is almost a mockery of the original eerie shattering.

Neither of these are the egregious problems, though. Firstly, there's a horrible tagline, and secondly, you get the rest of the cast superimposed over Marsden's glasses, which is just ridiculous. If you're going to do that, why not just have Kate Bosworth leaning naked against an enormous gun?

Perhaps this seems overly purist, nitpicky, and frankly, a little out of touch with how movie marketing is handled, to attack a film for its poster, but I think the bowdlerized image screams Rod Lurie. I don't think anyone in the publicity department would have decided to use the original image, simply because they don't care and wouldn't expect the audience to care either. Also the problems with the poster are so similar to the problems with the film itself that it almost has to be considered a whole new level of truth in advertizing.

One more clarification on where I'm coming from, I don't hate the basic concept of a remake, and I don't think that in remaking something, even in remaking something that is a classic, one has to slavishly hold to the original. My problem in this case is that the decision was made to hold as closely as possible to the original while systematically removing every element that made it striking and interesting. I would welcome the naked leaning giant gun poster, because at least they were announcing that they were taking the basic plot contrivance and any small amount of cultural cache the original property held and running straight to the bank with it. In this case, Rod Lurie simply doesn't understand the movie that he obviously loves.

This is a little verbose, so I apologize.