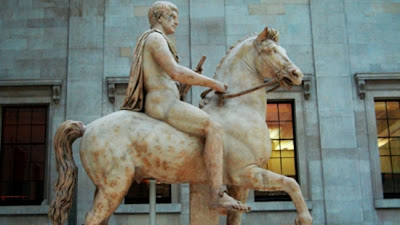 “History is like a big bowl of soup. What kind of soup? Well, that’s where this analogy gets interesting. You see…” Abraham Lincoln spoke these words to Major Henry Rathbone on April 11, 1865, but before he could finish the thought, John Wilkes Booth shot him in the eye with a crossbow, and escaped from Ford’s Theater on a zipline, never to be heard from again. As “The Grand Inquisitor”, as Lincoln was known across the globe, lay dying, Rathbone grabbed him by the lapels and shook him furiously, shrieking “What kind of soup??? WHAT KIND OF SOUP!?!?!?” Alas, the arrow had destroyed the talking part of Lincoln’s brain, so that his last great speech was lost to the mists of Heaven.

Nevertheless, Lincoln’s point, however unfinished it may be, was well-made. What, finally, is history? Zachary Taylor once claimed “History is not unlike my wife's gingham dress, in that the dress, much like history, as often as not, though by no means continuously, and perhaps not even sporadically, now that I think about it, but essentially my point, which I do believe remains valid despite these newly considered reservations, is that my wife’s gingham dress and history share in common the fact that they both…ACK!” The light shed by Taylor’s brave words may be dim, but I think it is quite clear that both of these great men proved beyond all argument that history is very like a great many things, and it is in the comparing of history to these other things that knowledge, which is precious, is, indeed, gained.

History, as an idea, was invented by the Greeks, or the Romans, one of those. Back then, the belief had been that all the things you remembered happening, including past rulers, wars, economic upheaval, natural disasters, societal change, and scientific advancement, didn’t actually happen, and what you thought had happened were all false memories implanted by sea sprites that lived in your hair so that each soul that was born anew at the rising of the sun every morning would have things to talk about, and so that everyone could pretend to be smart, instead of waking up, looking around and saying “What the fuck???”, after which they would just wander around being scared of dogs and water and throwing sticks at each other. How they could believe this and believe the false memories is unclear, but this paradox is likely the catalyst that led one of them to realize this was all bullshit. Sea sprites living in your hair? Shouldn’t they live in the sea? Get out of here with that nonsense.

This new theory, that things actually happened and if they were big enough they added up to history, was presented one day to Caligula, who wiped his mouth, put down the horned wooden dildo, and demanded that someone bring him whatever paper was back then, and probably also a pot of infant blood, so he could begin writing down all these things, all this…history. When the senate read what Caligula had written, they all looked at each other and scratched the backs of their necks, whistled, and made “Hoo, man” sounds. Some announced that they had a thing they had to be at, while others pretended they couldn’t read. Those who remained tore up Caligula’s pages and went about writing their own history, saying Caligula would never notice because they still had to explain to him what apples were, and they were getting ready to poison him anyway. The resulting work, called the Historica Von Tabular, is the basis of all human knowledge.

It is because of the Historica Von Tabular – or HistVoT’bular, as several centuries’ worth of hip and savvy teens have dubbed it – that we have any kind of recorded history, or, for that matter, know that Archimedes had a penis “the mass of which could shatter Olympus itself.” Along the vast amplitude of time, the HistVoT’bular has been updated and expanded with such diligence that any history book you might have seen is not merely a chapter of the HistVoT’bular, extracted for study of a specific topic, but an abridgement of a chapter. The actual, physical HistVoT’bular is now so enormous that noted Norwegian historian Arnkjell Skarstadhagen, one of the few living scholars to have seen the book, said “the book could shatter Valhalla itself. It is very much like Archimedes’ penis in that way.” Currently, it is stored inside a dead volcano, on some secluded and mysterious Asian island. The vault – or bunker, really – where it’s kept is made of an indestructible metal that came from space, and might, some have speculated, actually be sentient. Regardless, Cilia Sumo, the seven-foot-tall Japanese fashion model, nuclear physicist, arms dealer, and, as of last Tuesday, possessor of all the world’s gold, has assured world leaders that the “laughing walls”, which the few contractors who built the vault and survived to tell of it, have spoken of, claiming that the sound of the “alien cackling” that vibrated from the metal slabs melted the insides of many of their colleagues, is just a lot of “silly shenanigans. What’s not so silly is world poverty.” And how can you deny that? Poverty is pretty bad.

So thank you, Cilia Sumo. Without you, the great “soup” of history might forever be nothing but scattered ingredients, hidden on the highest shelves of the universe’s kitchen, the strong fiber of its “gingham” absent from the “dress” that would, without your watchful eye, fall in tatters to the floor of Hades, around the ankles of Ignorance. And so the question remains: What kind of soup is history? The answer is: Delicious.
Posted by bill r. at 8:31 PM