Through the German Night

Lars von Trier, you must admit, has had a very strange career. He currently enjoys a place as a filmmaker with one of the year's most celebrated films (Melancholia, which I still haven't seen, goddamnit) and as a filmmaker with one of the most reviled, or at least distrusted, personalities and artistic philosophies and psychologies. This last is largely a product of ill-timed and unfortunately public jokes, Von Trier's taste for provocation, and a deeply wearying global self-righteousness which has flipped the generally accepted principle that what you do means more than what you say.

But anyway. That's all just what's going on right now, and the strangeness of Von Trier extends way back. There's always a lot going on in any given Von Trier film, many reflecting his various social prejudices or fetishes or fears (maybe "terrors" works better), as well as, always, all the sources of his despair. But the central struggle of Von Trier as an artist is stylistic. Still known, eleven years after he made a film even remotely in this mode, for the Dogme set of artistic rules he devised back in the mid-1990s, Von Trier has gone from seeming to want to send up filmmaking convention, to dispensing with it -- sort of, or so he thought, or so he said he thought, but you never really know now do you? -- to throttling the very life from its bones, to shooting electricity through it to see if it could be made to kick again, Von Trier seems to have for now settled into a kind of style of classical composition and photographic beauty (he did this first, by my count, with Antichrist. Of all things, need I add). Back with Dogme, the rules of which were picked up by several other like-minded Danish filmmakers, the idea was to strip away everything that made films, to Von Trier's way of thinking, boring and predictable. What he was stripping away sometimes made sense, under the circumstances, such as no artificial light, and sometimes seemed entirely arbitrary and pointlessly limiting, like no guns, and anyway, in the end, did not achieve the clear-eyed, kitchen-sink realism that a lot of people mistakenly believed was the goal. Dogme was, if anything, a phase, and a way for Von Trier to reinvigorate himself. It's like when you hear artists talk about working on tight budgets, or under the thumb of censorship, and how this forces them to be more creative, although in Von Trier's case the restrictions were self-imposed, and the true creativity seems to have followed the mantle of Dogme being shrugged off, or more accurately slowly chipped away.

But what led to Dogme, anyhow? Von Trier's stated reasons don't interest me too terribly much, but what does interest me is that the Von Trier film that directly precedes Breaking the Waves, his first Dogme film (barring some Danish TV work) is Europa, the least Dogme-like film you could imagine, in that it is so aggressively artificial both in style and content, but mostly style, that it's not hard to imagine Von Trier looking at the film upon its completion and desperately choking down a scream. If anything like that happened, I know how he felt.

What Europa is, is The Good German as if it had been directed by Guy Maddin. Maddin's hyperventilating, fever dream take on silent film aesthetics is not only content to hold on to the rough edges, as compared to today, of the early days of filmmaking, to the point where he wants to twist the relatively primitive technology to perform grotesque acts. In Europa, Von Trier sort of gets that, but he still wants to keep the polish of Hollywood's golden age. This leads to moments of characters walking in place in front of a rear projection in a setting where, in a Hollywood film from the 30s and 40s, no rear projection would be used. Verisimilitude is hardly Von Trier's top priority, though, because Europa operates as, and wants to evoke, a dream.

It tells the story of Leopold Kessler (Jean-Marc Barr), an American of German extraction who travels to Germany shortly after World War II has ended. A dull, naive, and therefore easily led young man, Leopold comes under the wing of his shady and very Teutonic, with all that implies in relation to World War II, uncle (Ernst-Hugo Järegard) who gets him a job on a train as a sleeper car conductor, a gig were led to believe is kind of plum. The train is part of the Zentropa line, which is owned by the troubled Hartmann family, whose members include Max (Jorgen Reenberg), the mournful patriarch; son Lawrence, played by Udo Kier and notable mainly because Udo Kier's Udo Kier-ness not only doesn't, but is never asked to shine through; and daughter Katharina (Barbara Sukowa), with whom Leopold will fall in love, and whose loyalty to Germany, not just generally but possibly Germany as it had just very recently been, becomes the cause of some distress. As does, not unrelated, the presence of a band of underground Nazi terrorists known as "werwolfs" (or "werwolfen"? I don't believe the plural is ever spoken). Leopold will eventually be approached by the American military, in the person of Eddie Constatine (who in 1991 looked a whole lot like Järegard), to try to infiltrate the Nazi group, and will be approached by the Nazi group to plant a bomb. Until the film's ending, Leopold is, as I've said, such a weasley, inactive little turd that his eventual crack-up leads to a brief moment of basically impotent aggression that briefly put me in mind of Saving Private Ryan's Cpl. Upham. 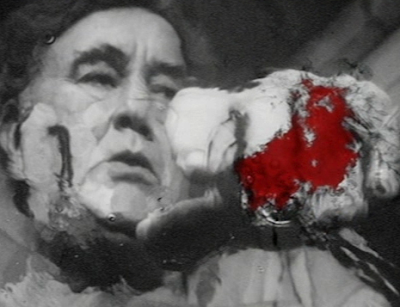 So. I found Europa largely infuriating. It has elements that are powerfully, dreamily haunted -- Max von Sydow as the hypnotic narrator doesn't hurt -- and an ending that is entirely gripping. But it is finally too schematic as a story and earnestly willed into being as an exercise in style, and a confused one at that. Classic film techniques as a metaphor for a dreamstate seems workable enough, but the dreamstate itself as a metaphor for post-war Germany specifically and Europe generally, and post-war Germany as a metaphor for any situation that might call for a human being to either take a stand or be swept away...perhaps it's all too much for Von Trier, at least the Von Trier of 1991. Not to mention the fact that it's pretty much impossible to invest oneself emotionally in anything to do with Leopold, let alone the eventual romance that is supposed to pack any sort of punch. Aggressive artificiality and sincere emotional stakes don't need to be mutually exclusive, but they are in Europa.

Boy, the ending's good, though. It's hard to see much of what would become Dogme in those few minutes, but you can see what Von Trier would finally leave Dogme behind in favor of. He would take baby steps away from Dogme with the, let's face it, entirely wretched Dancer in the Dark, which attempted to match Dogme's realism (or "realism") with not just melodrama but the musical, too (more Dennis Potter than Stanley Donen, though) before almost seeming to send up his own rules with his masterpiece Dogville, a film that keeps guns and artificial lighting but sweeps away a good deal more of the things one might expect a movie to have. It's frankly been fascinating to watch Von Trier over the years trying to decided what things -- and by "things" I mean actual, physical things -- a movie needs, before deciding, at least for now, that it's okay for movies to have the kinds of things that movies usually have, and see what he can do with that. Antichrist, apparently. A film for another day, perhaps, but I will say that if movies like Antichrist are the end result of Von Trier's struggle, then it has been well worth it.

TIFF Lightbox just started a Von Trier program and are screening most of his work, including Melancholia and the hard to find The Idiots, as well as Europa, which is playing Nov. 12 and 17.
Posted by bill r. at 11:18 PM