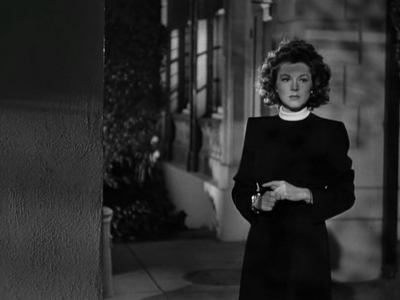 Most men are, according to the ladies at the beginning of Robert Wise’s Born to Kill, turnips. The women are Laury Palmer (Isabel Jewell), Mrs. Kraft (Esther Howard) who runs the boarding house in whose parlor this conversation takes place, and Helen Brent (Claire Trevor), and a turnip is any man who can be pushed around, who doesn’t take what he wants, and who – although this idea is never spoken, and would probably be sincerely if naively rejected by Laury and Mrs. Kraft – aren’t constrained by such useless emotions as guilt and regret. Whatever the polar opposite of a turnip is, both Laury and Helen have found their king in Sam Wild (Lawrence Tierney), a man so completely unconstrained by guilt and regret that very soon he will murder Laury and Danny (Tony Barrett), the man Sam believed was “cutting in on” Sam’s claim to Laury, on impulse. Later, when Sam tells Marty (Elisha Cook, Jr.) -- who is sort of like Jiminy Cricket if Jiminy Cricket was the last guy you’d want for that job – what he did, Marty tells him that he can’t go around killing people like that. Sam wants to know who says he can’t, and Marty concedes that nobody does.
.
So Sam’s no turnip, but there are several on the periphery of Born to Kill, and of film noir in general. In one sense, they exist in films like Born to Kill (and Danny was one, and Helen’s fiancé Fred, played by Philip Terry, is another) because, you know, without evil we would never understand good, although in noir that formula is often reversed. Film noir is, more often than not, not about the quest for justice by good men (there are actually a lot of noirs of this sort, but some time back a lot of people decided they’d rather not define the genre like that), but rather about the struggle of bad people – the struggle to live (or, more precisely, to not die), or to flip the course of their morality. Born to Kill is about both kinds of struggle, because while Sam fights to gain money and power and not die along the way, Helen Brent – who finds the bodies of Danny and Laury, and comes to love Sam not despite of, but because of what she knows about him, going so far at one point as to threaten the life of an old rummy (this would be Mrs. Kraft) if she ever yaps to anyone – is astonished to discover that her own soul is corrupt, that she is “rotten inside”. Throughout the film, Helen will alternate between trying to stamp out that corruption, and desperately embracing it.
. 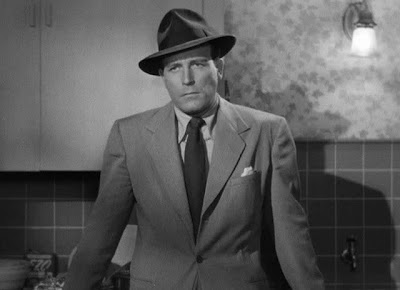 In Born to Kill, you have this core evil – Sam Wild – that radiates out, until it becomes diminished to nothing on the fringes. Just outside that core are Helen and Marty, and on the fringes are good people, turnips, like Fred and Audrey Long’s Georgia (good, but not always smart or perceptive, as Georgia, who is Helen’s sister, actually marries Sam). In between are folks like Arnett (William Slezak), the private eye hired by Mrs. Kraft to find out who killed Laury. Arnett is on Sam’s trail, but the audience can’t put a lot of moral faith into him, because we eventually learn that he is in possession of a soul only slightly blackened, in comparison to your Sams or Helens anyway, but blackened all the same. And of the points of view the film makes us privy to, Arnett’s is as close to coming from a decent person as we get. Oh, there’s Mrs. Kraft, but she’s a drunk (she’s good, though, and Howard is terrific in the role – her breakdown before Helen’s ruthlessness is perfect) and we don’t really follow her the way we do Arnett. Arnett's mixture of optimism in the face of poverty (Mrs. Kraft's patronage comes at a very good time) and cynical greed could mirror certain incongruous branches of Hollywood filmmaking at the time, if you wanted it to, but it more precisely and specifically encompasses the tug-of-war within film noir. Born to Kill isn't exactly the cheeriest of all such films (what would that be, I wonder? The Big Steal?), but outside of Danny and Laury (and even Danny was kind of a prick), those behind whom the big door is slammed pretty much, as is so often the case, have it coming.
. 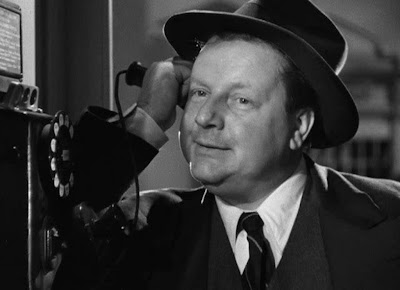 Meanwhile, the turnips -- Fred, for example, who eventually breaks it off with Helen because he can see the blackness welling up within her, and he can even see it winning against her better self -- make it out okay. Not without some scarring (Georgia's going to have to learn to pick better, for one thing) but their essential goodness saves them. They're not quite so fated, as Sam and Helen and Marty are, by the lives they've chosen, at least not negatively, and it's the bad kind of fate that is such a big deal in noir. But I don't know if it's fate so much as it is just plain begging for it. With Helen, it's fate -- her taste for the mean and bloody side of life surprises even her, which implies it's been dormant in her for a long time -- but Sam Wild seems content to pull on the various threads that will eventually leave his life completely unraveled. He's not terribly introspective, and there's a funny scene where he and Georgia have just come back from their honeymoon, cut short because the big dunce got angry that Georgia, who is quite rich, doesn't think it's such a swell idea for him to take over running the newspaper she owns. Clearly, Sam thought this position would be his right by marriage, and seeing his brick-like face cloud over with confused anger would be sad if we didn't remember poor Laury and Danny. Even so, Sam keeps plugging away with one thoughtless or stupid or violent action or reaction until he finds himself on the wrong side of a revolver. The only way his end can be called fate is if you take into account how blind he is. Otherwise, it almost looks like he's deliberately digging his own grave.
.
This line of thinking is helped along when you have a figure like Lawrence Tierney planted front and center; he's one of the legends of film noir. Like Robert Mitchum with every ounce of warmth and basic human decency removed, Tierney lumbered through his films like a blank-faced ape made out of concrete. Someone with a keen eye and a sharp sense of character gave Tierney his big break in Dillinger from 1945, directed by Max Nosseck, and his reputation would be pinned by his subsequent work in Born to Kill and The Devil Thumbs a Ride, but sometime in the 1950s he turned into a less murderous, and less ambitious, version of Sam Wild, screwing himself over with a series of drunken brawls (he once apparently got into a street fight with ex-con, crime writer, and future Tierney co-star Edward Bunker), effectively killing his chances for a serious film career until Quentin Tarantino briefly revived him in 1992's Reservoir Dogs (and let us not forget Tierney's subsequent voice work on The Simpsons as Don Brodka, the Try-N-Save's head of security).
. 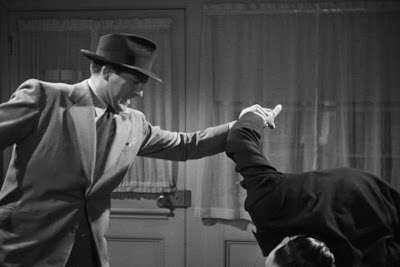 I first heard of Tierney through Barry Gifford's book The Devil Thumbs a Ride & Other Unforgettable Films, in which Gifford pumps up the 1947 Felix Feist movie starring Tierney ("He'll Kill Until He Dies!") as one of the blackest, looniest noirs ever made. I was able to see The Devil Thumbs a Ride about ten-plus years ago, but the copy was beat-down, the sound and image were shot, and I found it to be a very frustrating experience, with that frustration being my primary memory of it. I do remember something of Tierney, however, far less of the surrounding turnips, who are generally too busy trying to stay out of the way of guys like Tierney, or being uprooted and chopped up, to try to be interesting. Of course, though it would be boring to admit it, and regardless of the gender specifics of the ladies' conversation at the beginning of Born to Kill, we're the turnips, in reality scrambling out of the way of killers and thieves, and through the vicarious medium of film we're maybe following some kind of death fantasy (this turnip metaphor is threatening to break down) as we stare, through glass, in fascination (there it goes) at the prowling likes of Tierney, or the deceptively alluring and conflicted Claire Trevor.
.
Back to Tierney, though: he made a lot of movies, but, in terms of availability, even the small handful of his early classics seems rather thin when we can't view a sharp, clean print of The Devil Thumbs a Ride, one of those notorious shithouse B-movies that seem to die off by the dozens every year. Well, but hey! As it happens there's going to be a fundraiser to help curb this very thing. This coming February, Marilyn of Ferdy on Films and The Siren will be hosting the For the Love of Film Noir blogathon (click on either of the preceding links), in support of the Film Noir Foundation. Give your money, or give your blogspace to it, whatever you can do. This post is but a taste of what I hope to bring to the table in praise of a film genre that is near and dear to my heart. And if you hate the shit I write, well, my guess is everybody-but-everybody is going to jump in this thing, and the riches will be positively embarrassing. Until then...
Posted by bill r. at 7:27 AM

Wow, you definitely made sure you were the absolute first poster for the blogathon. Terrific piece and educational too, as I'm not really familiar with this one. Or The Devil Thumbs a Ride for that matter.

It doesn't look to be available on Netflix Instant so I guess I won't be watching it in the immediate future (it takes me weeks to return DVDs and get more) but will definitely try to before the blogathon.

Oh, you know, I wanted to watch it again, and I wanted to then write about it, AND I hadn't said anything about the blogathon, so I figured three birds with one stone, and all that.

BORN TO KILL is really good, though. Tierney certainly had a presence, and a, I don't know, way about him. He was a good actor, but was, unfortunately, an asshole, too. He said that he figures he threw away about six or seven careers because of his behavior. But somehow knowing that Tierney's not entirely putting on a tough-guy show in BORN TO KILL heightens the effect.