The Collection Project: You are Big Time! 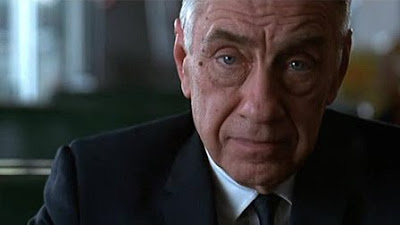 Paul Thomas Anderson’s Hard Eight is not exactly a young man’s film, but in some ways it is very much a young man’s screenplay. In the DVD commentary track, Anderson talks about struggling with the script almost from the start, and saying the way for him to bust through that is to put two characters in a room and get them talking. This method resulted in Hard Eight’s wonderful opening, with John (John C. Reilly) and Sydney (Philip Baker Hall) sitting in a Reno, NV diner, over coffee and cigarettes, the mysterious Sydney offering to help the sad-sack John – who’s just come from Vegas after failing to win enough money at blackjack to pay for his mother’s funeral – avoid becoming a homeless Reno reject.

As I say, this is a great scene, highlighting Reilly’s effortless comic abilities, and Anderson’s considerable gift for dialogue. It also subtly clues you into the fact that the only reason Hard Eight exists at all is because Philip Baker Hall is an actor who is alive now on this planet. Though I had, by the time Hard Eight came out on video and I was able to see it for the first time, seen Hall in Altman’s Secret Honor (as well as – and this is not insignificant – the episode of Seinfeld where Hall plays the library cop), Hall’s work in Anderson’s debut feature was still a revelation for me. Sydney is one of my favorite film characters, certainly of modern times, and Hall gives what I consider one of the great screen performances. From the beginning of the film, you know just enough about Sydney to be fascinated by him, and to admire him (so fascinating that Hard Eight is one of the films from my burgeoning movie geek years that I got my dad to watch. This sort of thing didn't always work out too well, but after watching the film I remember my dad telling me that he didn't like it at first, but the further along he got, the more he thought, to paraphrase the line he most often quoted from Butch Cassidy and the Sundance Kid, "Who is this guy??"). Sydney’s a remarkably decent person, decent in a very old-fashioned way, who appears to know more than anybody else how to get buy in towns like Reno and Vegas, and it’s this knowledge he’s offering to John. But there’s a very sharp edge to him as well, shown first when the knuckleheaded John (who is nevertheless expressing some understandable paranoia) reacts to Sydney’s offer of help by saying he’s not gay, so if Sydney’s looking for some boy hooker, he can forget it. Sydney’s response is to say no, that’s not what I’m after, and this is the last time I’m going to offer my help.

At various points throughout the film, Sydney is shown to be quietly angered and frustrated by any person or encounter that proves to him that basic civility and manners are evaporating, though his only recourse seems to be to make sure those values remain intact within himself, as well as, to the extent he’s able to control such things, John. A sticking point for Sydney is John’s friendship with Jimmy (Samuel L. Jackson), a flashy, loud-mouthed, low-rent dickhead who works security at one of the casinos. When Sydney and Jimmy first meet, Sydney is playing Kino by himself when John and Jimmy come by. As they do, Jimmy uses his outside voice to comment on the physical attributes of their departing waitress. When Sydney quietly objects to this behavior, Jimmy condescendingly explains that these waitresses not only enjoy such compliments, but they’re all whores anyway. To which Sydney says, “I just don’t want it coming from my table.” It’s possibly my favorite line from the movie, delivered by Hall in a way that somehow mixes civility, exasperation, and a kind of suppressed danger.

To counteract, among other reasons, John’s friendship with the loathed Jimmy, Sydney constructs an introduction between John and Clementine (Gwyneth Paltrow), one of those waitresses Jimmy was talking about. Clementine is typical Reno damaged goods, a nice young girl, lost, or close to being lost, to a life of being a waitress as a cover for really being a hooker. Paltrow is very good here, but it’s around the time of her introduction that Anderson’s writing methods, and his youth, start to show their negative influence. Shortly after Clementine and John first make googly eyes at each other, John calls Sydney in the middle of the night, begging for help. When Sydney arrives at the motel room where John told him they’d be, Sydney finds a terrified John, a tearful, weirdly angry and withdrawn Clementine, and another man, unconscious and bleeding on the bed. That man is or was one of Clementine’s clients, but for some reason he refused to pay her for services rendered, so she or John or both of them knocked him out, tied him to the bed, and called the guy’s wife, demanding Clementine’s fee as ransom.

This is, we can all agree, a very stupid thing to have done, but that’s not the problem. The problem is that the long scene that follows, in which Sydney announces how stupid this is, and alternately offers the best practical advice he can and refuses to help at all, feels exactly like a scene that Anderson had no map for when he began, but he kept writing it until he’d found the exit. I’ve mentioned that Anderson is an enormously gifted writer of dialogue, but if screenwriters ever put together audition reels of their best writing, Anderson should leave this bit off. All you really get here is characters saying something, and then a minute later shouting out the same question or statement or insult, slightly reworded, or, if things have gotten really tense, one character will say “Fuck you!”, and then another character will say “Fuck you!”, or words to that effect.

I criticize with love, though, because I feel like I know what he was going through. In my own humble way, of course, and I’m in no way trying to associate myself with Anderson, but I don’t think anyone who has tried their hand at fiction, either in script form or prose, doesn’t know what it’s like to hit a dead end in your story that you simply try to write your way through. It’s like a car being stuck in the mud, and you keep the wheels spinning in the hopes that something will grip. Sometimes it do, sometimes it don’t, and this scene from Hard Eight don’t. At the very least it should have been tightened up, if not ditched outright and completely rethought. But the good news is that the narrative goal of that scene (the scene has other things on its mind, to do with character, which I suppose are more or less accomplished, however clumsily) is simply to find a reason for John and Clementine to get the hell out of Reno and leave Sydney alone with Jimmy, thereby setting up Hard Eight’s brilliant final stretch. In that stretch, which I won’t describe in detail, you find out why Sydney went out of his way to help John, a stranger at the film’s beginning, and while that explanation might be a bit too neat in terms of cause and effect, Sydney remains a largely mysterious figure by the end. Less mythic, perhaps, but still mysterious, and, in any case, Hard Eight, while by no stretch Anderson’s best work, does contain my favorite last shot (or shots) out of any of his films, and those shots would have no weight, or wit, if Sydney’s myth hadn’t been shattered.
-----------------------
This post is part of the Paul Thomas Anderson Blogathon, hosted by Jeremy Richey at Moon in the Gutter.
Posted by bill r. at 9:50 AM

I can't really claim to have seen this, or rather, we had it on at Blockbuster one night, back around 97 or so when I was working there and that's all I ever saw of it. I remember liking the stretches I saw enough to want to see his new movie Boogie Nights, which was all the talk, but never really gave this a second look. And really, the first look doesn't even count because I don't remember any of it now so I'm glad you didn't recap the ending, because I don't think I saw that part.

What I can say, though, is Phillip Baker Hall is one of the greatest actors in the business, period. I have never, ever, not liked him in a movie. Never, ever, not been impressed. And that includes the Seinfeld spot you mention where, if you recall, the studio audience applauds after his diatribe on late books because he does it so goddamn brilliantly! Thank all that is good that actors like Hall exist and directors like Anderson have enough sense to use them.

Hall is amazing. And I wanted to be sure to add that my reference to his SEINFELD episode wasn't incidental, because I didn't want anyone to think I was being flippant, or glib, or whatever they might have thought. He's fantastic in that episode, which I was fortunate enough to catch again, after many years, on rerun a few months ago. He's fucking hysterical in his few scenes. I'm not the world's biggest SEINFELD fan, but that character was brilliantly conceived, and no one could have played it like Hall.

You should obviously check out HARD EIGHT. Hall delivers a masterclass performance. The film's a little clunky at times, yes, but overall still very, very good.

It's been ages since I saw "Hard Eight" myself, though I remember being more impressed with Gwyneth Paltrow than I ever have been since. But your review here makes me want to find it and watch it again.

My brother, a big Anderson fan, got me to watch it. He also pointed out to me that Paul Thomas Anderson has a penchant for casting "three-named actors" (Phillip Baker Hall, Phillip Seymour Hoffman,etc. or at least actors who include a middle inital in their names (William H. Macy, John C. Reilly). I always thought that was funny.

And yes, Hall is amazing in that Seinfeld episode.

I was thinking about that three-name thing yesterday. Maybe those guys are just better. It seems like it sometimes.

I would say this probably is my favorite Paltrow performance. Which isn't saying a whole hell of a lot, though I also like her a lot in THE ROYAL TENENBAUMS, but here she's completely without affectation, or up-her-own-assedness. There's a great scene between her and Philip Baker Hall in a diner (lots of diners in this movie), and it's a quietly emotional scene. At the end, a guy in the diner behind Paltrow gets angry at the women he's with and makes a noisy exit. Paltrow's reaction is dead on the money, and it's one of my favorite small moments in the film.

Wonderful aryicle Bill, Thank you so much for participating!