The Collection Project: A Deep Penetrating Dive into the Plasma Pool 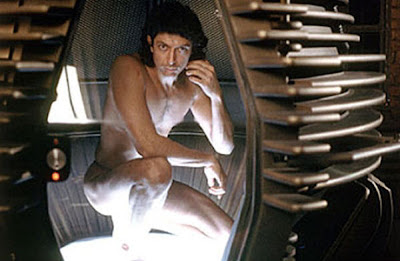 An overview of the career of David Cronenberg would have to mark his 1986 remake of Kurt Neumann's The Fly as something of a watershed. In the view of many people, including myself, Cronenberg's The Fly is easily one of his best films, but it also works as a transitional film, coming after his semi-big Hollywood turn as the director of the Stephen King adaptation The Dead Zone. That film feels particularly un-Cronenbergian, and in this sense the ultra-Cronenbergian The Fly could almost stand as his Blue Velvet, following his own Dune, The Dead Zone. That analogy can only really work if anybody thought The Dead Zone was any kind of disaster, but nobody does, because it's terrific and popular, so the analogy turns out to be a big whiff. In any case, the fact that The Fly is a remake is almost incidental, as the material -- especially the way the science of the story was refigured from the 1958 film, credit for which Cronenberg gives to the writer of the original draft, Charles Edward Pogue -- is so in line with what Cronenberg was all about in the early-to-mid-stages of his career that the whole project, and finished film, seems like an absolute natural for him, in the same way that J. G. Ballard's Crash would a decade later.
.
The film is, in short, disgusting, one of the most disgusting films of Cronenberg's very disgusting career. In Neumann's film, a scientist, through a mishap with his newly invented transportation device, is fused at a genetic level with a housefly, which results in his own head, and one hand, being replaced, respectively, with a fly's head and, ah, hand, I guess. Pogue's idea, which Cronenberg ran with, was to have his scientist, Seth Brundle (Jeff Goldblum) suffer a similar mishap, but, instead of an instant and partial transformation, he would transform in stages, and the transformation would present, to borrow medical terminology, as his body gradually disintegrating. That's what happens in Cronenberg's The Fly, and the breakdown -- which starts, cruelly, with Brundle enjoying increased strength and energy -- is by turns sad, grimly funny, and stomach-churning. Of course, this breakdown isn't just a breakdown, because while certain aspects of his new bodily existence, such as copious vomiting, naturally appear to be the symptoms of a man who is desperately ill, they're also part of a new, accidental evolutionary step, from Seth Brundle/housefly to, as Brundle himself terms it, Brundlefly.
. 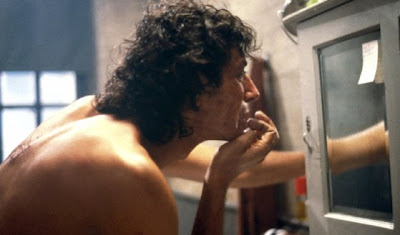 There is much going on in this film. First, there is Cronenberg's major early theme of body-horror, used to describe and depict in grotesque metaphor the way any of our body's might casually betray us with disease at any given moment. At one point, Brundle even says that his transformation is showing up as a sort of cancer. My problem with focusing too narrowly on this idea, in any of Cronenberg's films that employ it, is that it tends to miss the forest for the trees, which is how I feel pretty much any time someone tries to boil down the work of an artist I admire. Cronenberg himself is explicit enough when talking about his work that all that stuff is indeed on his mind (AIDS wasn't, though, when he made The Fly, despite any number of critics trying to cram that particular metaphor in there), but, as I hinted above, there's the strangely hopeless view of evolution running through The Fly, which is underlined with some vigor at the film's climax, when Brundle has been mangled up into some ungodly amalgam of man, insect and machine.
. 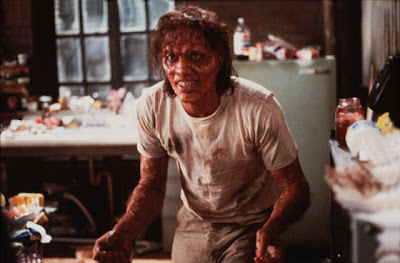 Beyond all this metaphor, though, The Fly is an intense depiction of a single character, Seth Brundle. The film really only has three characters -- along with Brundle, there is Veronica (Geena Davis), Brundle's girlfriend, and the reporter covering the various stages, first, of his work on the transporter pods which he believes will change the course of history and mankind (an ambition that is itself almost evolutionary in its scope) and later of his disease; and Stathis Borans (John Getz), Veronica's editor and former lover -- but for obvious reasons everything else in the film revolves around Brundle. And the key thing about Cronenberg's The Fly, and about Goldblum's extraordinary performance in it, is that Brundle is not simply the vehicle through which Cronenberg can express his themes and ideas. Brundle is a complete person (hell, even Borans and Veronica aren't simply idea markers here), and his graphic tragedy makes The Fly the most emotionally devestating film of Cronenberg's career.
.
There are certain things about The Fly which, watching it again today, struck me as newly interesting, but the emotional power wasn't one of them. I saw this film when I was about eleven, probably ten, and by the end I was a sobbing wreck. Okay, so I was a kid, but I felt almost as helpless and desolate today, as I watched Brundlefly finally give in to his despair and, his body now a complete disaster, lift the barrel of the shotgun that Veronica's holding, up to his forehead. What happens in this film is so terrible, so unfair and cosmically absurd, that you can never view Brundlefly as a monster, even at his most physically monstrous.
. 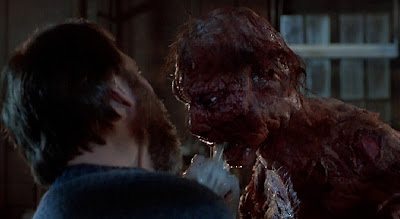 Which is fitting, since The Fly is also a bit of a throwback. There's a great deal of Frankenstein in Cronenberg's film ("Are you a bodybuilder?" a woman asks Brundle after he breaks a man's wrist in an arm wrestling match. "Yes," he says, "I build bodies."), both in the mad science element, and in its mournful atmosphere. But you can throw it even further back than that, because The Fly is at heart a classical tragedy. Brundle's flaws are outsized ambition and impatience (and let's not forget all the tampering in God's domain he does), and he dies for them. And the film gets there with such precision -- Brundle's rise, if only in the eyes of Veronica, and fall are sketched out in just enough detail, as is the intense love affair between himself and Veronica, which, along with the great work done by Goldblum and Davis, carries the film's emotional weight despite the fact that not a hell of a lot of time is given over to it before things go haywire. Even Borans comes through, as an asshole who might only be an asshole out of desperation.
.
The Fly is really pretty amazing. It's a metaphorical horror film structured as tragedy that doesn't let its themes overwhelm the people inside it. It's a gory horror film in which only one person dies (though it does make room for one of the most psychotically inventive cripplings of a character I've yet witnessed), a monster film in which the monster's lone rampage in a public area is motivated by the need to talk to his girlfriend in private. It is, in fact, the kind of film I dream about: a horror film about people and emotions, the kind of film that -- and you really must pardon me for what I'm about to do here -- fuses its genre trappings with a classic, character narrative. The maturity that Cronenberg really began to show in Videodrome and The Dead Zone was confirmed here, in spades. There was no looking back.
. 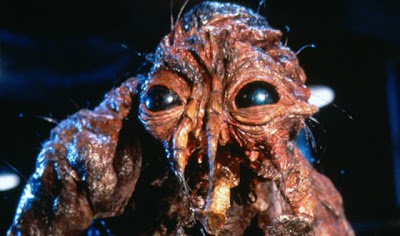 That's a terrific review. You capture the reasons I love this film so beautifully. Well said. I must revisit the tragic Fly and a tragedy it is indeed. Thank you.

Thanks, Fanatic. It's a truly great film.

after he breaks a man's wrist in an arm wrestling match.

It is an undestatement, you're right. I think I even meant to write it another way, but look, I didn't!

Excellent contribution, Bill, which I plan on highlighting tomorrow. I agree with you that there's no reason to say the film is better or worse than the original. They are so different, and each appeals to the viewer on different levels.

I am touched by the romance in the original. And the final scene is quite horrifying.

Still, the remake is one of Cronenbarg's warmest and most accessible films. And that's saying something.

I'm not sure I agree this is THE ultra-Cronenbergian film you propose it is because of that very accessibility. But there is something to that comparison you make between it and Lynch's BLUE VELVET. They both connect to their audience in a visceral way.

Great piece, Bill. I saw this when I was 13 or 14-- whenever it first came out on video-- and liked it right away. I really identify with what you said about its emotional power, and the way it makes you sob. Even as a teenager, I found Seth's arc so heartbreaking. I think it was also the first time Geena Davis registered for me-- I honestly can't remember if I'd seen her in anything before that-- and I'm also grateful to the film for that.

Thanks, too, for reminding me that THE DEAD ZONE is Cronenberg-- I love that film, but saw it long before I would've known who he was, and it completely slipped my mind. I love Martin Sheen on THE WEST WING, but whenever I see his character, I always flash back to that much more menacing candidate he played in that film.

Tony, I probably wasn't clear. I didn't mean that THE FLY was THE ultra-Cronenberg film -- I'd say that place probably goes to VIDEODROME -- but rather that in terms of a certain theme, body horror, I can't think of one that tops it, and, plus, it certainly trumps THE DEAD ZONE in that regard.

Brian - I can't remember when I was first aware of Davis, but it was probably this film. And she's great, and funny. I love her delivery of the line "Oh, you're kidding! A monkey just came apart in there!"

THE DEAD ZONE is probably my first Cronenberg film, and it was the absolutely the first one I liked. It took me a while with his other stuff, but THE DEAD ZONE is just automatically great, for newbies especially. And it's also pretty goddamn heartbreaking. To this day, that's my favorite performance by Christopher Walken.

If I'd had room for it, I was going to talk about Cronenberg's leading men, which has been a pretty interesting element of his films since James Woods turned up in VIDEODROME. It started a little bit earlier, sort of, with Oliver Reed in THE BROOD, but that's a supporting role. I just think that as interesting as his earlier work was, once Cronenberg started attracting big name actors, his casting decisions, and the performances that resulted, have been a key element to his career.