.
Moral gray areas. That's what serious artists often claim they like to examine. "Here," they say. "Here's a movie I wrote. What it does is, is it presents you with a man who does things that are so awful that you know you should be plainly disgusted by him. But you find yourself rooting for him, despite everything. Why is that? What is it about us that we can so easily find a link to such men? Are we all beasts inside? Or do we at least recognize the potential for violence, under certain circumstances, within each of our breasts? Also, it stars Antonio Banderas." So you take the the movie they wrote, and you watch it. Turns out it's about this hitman, a brooding, tortured man who has found, perhaps to his dismay, and against his own values, that the work he's best at is killing other human beings. This work proves highly remunerative, but his soul is dying. Except that, by the way, he does have his own private code under which he works, which says that he will only execute other killers, assassins less scrupulous than he, or tyrants, or members of secret government cabals who plot to blow up all the oceans so that they can become even richer! This hitman won't kill just anybody. And that movie is called Grosse Point Blank, and it stars John Cusack, not Antonio Banderas.
.
The point is, all that "moral gray area" bunk the guy was peddling was pure snake oil. We're not stupid. We know we're watching a movie, so a little violence directed towards those who would perpetrate cold-bl 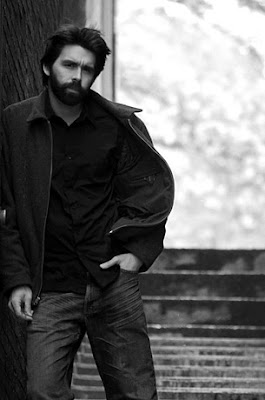 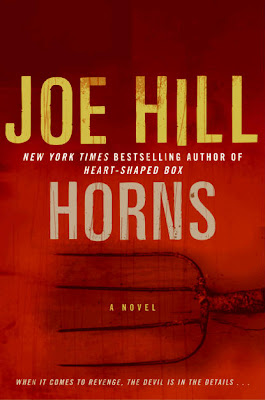 Much later in the book, Ig is asked by another character how he came to have those horns, these new powers, such a devilish appearance and demeanor. Ig says "Without Merrin in my life...I was this."
.
The Devil is in us all without true love and whatnot, except for two things: Hill goes out of his way to make a case for the goodness -- of a sort -- of the Devil, Biblically speaking, and he also seems to forget that he's painted a reasonably full portrait of the young Ig, before he had Merrin, and guess what? He was a fucking peach! He helped people, giving Lee (who he believes saved him from drowning when they were teenagers) money and CDs when he thought Lee had nothing. Hill repeatedly tells us -- and I mean, repeatedly -- that Ig was a terrible liar, because lying made him sick. In short, he was a good kid. Oh, sure, we're told that the young Ig does some maneuvering so that the young Lee won't pursue the young Merrin, but he doesn't maneuver dishonestly, and besides, given that years later Lee will rape and murder Merrin, Ig wouldn't have been out of line if he'd skipped past the aforementioned maneuvering and simply pushed Lee under a train. So what's all this "I was this" business? You were what? A nice guy whose horns hadn't grown out yet? Physically grotesque, but still a person who would forever prove that it's what you're like on the inside that really counts? I mean, it's not like you were a priest, or a cop, or anything like that.
.
Horns is really, for all it's profanity and perverse sexual shenanigans, something of a PC joke. The truly good guys are given nothing truly bad to live down, and the bad guys are never given anything truly good to cloud our view of them. Men are the worst, authority figures worse yet, and there's not a moment of gray in the whole damn thing.
.
(In fairness, I must add that there is a scene involving a Christian Conservative politician, and Hill portrays the man with a surprising amount of sympathy. It's brief, however, and the implications of the scene go a pretty far way towards erasing that sympathy, at least in my eyes.)
.
To truly illustrate this, late in the book Hill gives us a scene with Merrin's still-grieving father. Since this is a pretty good guy, Merrin's dad, he doesn't confess anything too bad to Ig, and later becomes a bit philosophical:
.
"...My father wouldn't let me take the theology course I wanted, but he couldn't stop me from auditing it. I remember the teacher, a black woman, Professor Tandy, she said that Satan turns up in a lot of other religions as the good guy..."
.
And stop. Now, listen. Joe Hill's dad is Stephen King, and King has in the past been called out by critics for portraying his minority characters, specifically his black characters, as one-note saints, magical souls whose only purpose is to help the more important white characters. Though I personally think a bit too much is made of this, it's not like those critics are basing it on nothing -- there's Mother Abigail in The Stand, Halloran in The Shining, John Coffey in The Green Mile, and possibly others I'm forgetting. But at least in King's novels the black characters get a look in. Despite what the critics say, even despite the validity of what they're saying, Mother Abigail, Halloran and Coffey are allowed to be more than just black. Joe Hill turns the only reference to a black person in the entirety of Horns into a politically correct non sequitor. Why would Dale Merrin feel it necessary to point out, apropos of not a goddamn thing, that the professor in question was a black woman? Because she's the one, indirectly, whose going to explain the whole thematic structure of the book, and you can't have a white guy do that. What would people say? The fact is, the race (or gender) of this never seen, and never again referred to, professor is entirely irrelevent. Why does Hill seem to think it is?
.
Well, so that's it. Oh, the book ends with a sort of chase, and snake bites and stabbings, and it's all pretty tedious, but at least it signalled to me that the end was nigh. And to that, I say "Thank God."
Posted by bill r. at 10:41 PM

Urk. Kinda gets me thinking maybe all that talk about how "books and reading'll be gone for good in 1, 2 years at most" might have an upside to it.

By that time, books will be a vapor that we inhale anyway. I just wish HORNS hadn't received the honor of actual print before that happened.

Nice writeup! There were actually a few stories in 20th century ghosts that I liked, but yeah this sounds brutal.

Thanks for saving me some time. I also felt that HSB fell apart at the halfway point. It's actually been quite some time since I've enjoyed a horror novel all the way through. It's to the point that I'm beginning to think the short story is the genre's only valid form- with a very few exceptions.

It's also really disappointing to find that Mr Hill has inherited his dad's knee-jerk attitude toward religious and authority figures. That crap drives me straight up a wall. And I say that as a blue state atheist.

Drew - What's so frustrating is that I think there are some stories in 20TH CENTURY GHOSTS that are plain brilliant. But Hill is a frickin' mess -- a lecturing, deck-stacking mess -- when it comes to his novels.

otherbill - Following up on what I said to Drew, the last time I read a fully satisfying horror novel was when I read THE WEREWOLF OF PARIS by Guy Endore last October, and that book's 70-some years old. Modern horror novels are, in my experience, a wasteland, but I keep trying.

The short story is where the genre thrives. I don't know if you've read this blog in October, but I basically write about short horror fiction all month, with the occasional novel thrown in, and I've had that theory proven to myself over and over again.

As for what you said as a blue state atheist, I really appreciate that. I know lots of blue state atheists probably think the way you do, but they apparently don't write novels or make movies. I wish I could say for sure, as a reddish state pretty-much-agnostic of loving Chrisitan parents, that I would approach a similarly unfair portrayal of blue state atheists as disapprovingly, I can't do that, only because I don't believe I've ever had the opportunity to put myself to the test in that manner.

Turns out it's about this hitman, a brooding, tortured man who has found, perhaps to his dismay, and against his own values, that the work he's best at is killing other human beings. This work proves highly remunerative, but his soul is dying. Except that, by the way, he does have his own private code under which he works, which says that he will only execute other killers, assassins less scrupulous than he, or tyrants, or members of secret government cabals who plot to blow up all the oceans so that they can become even richer!

Ironically, that is also the plot of the John Cusack classic, Better Off Dead. Or at least it should've been.

Thanks for a great review of a book whose only horror seems to be its author's prose style-- my god, the excerpts you pulled were HORRIBLE. I don't just mean the goofy plot machinations, I mean the actual authorial voice. "His grandmother, he learned then, had no hip pain at all but liked people pushing her here and there in the wheelchair and waiting on her hand and foot...She especially liked to order around her daughter, who thought her shit didn't stink because she was rich enough to wipe with twenty-dollar bills...It was Vera's [the grandmother] privately held belief that Ig knew what his mother had been -- a cheap whore -- and that it had led to a pathological hate of women and was the real reason he had raped and killed Merrin Williams..." That's not great writing, it's not even great conversational dialogue, it's just...rushed outlining of a crappy plot point.

You read a lot more horror fiction than I do, but I will say that King's work is at its best in the short story form-- his novels are ponderous, but his collections usually have several moments of brilliance.

wv: "Hobble," which I suspect is the only way I could get through Hill's book.

Brian - I didn't get into the prose, because I find it hard to describe other people's prose, and therefore lazily avoid that duty unless it's particularly great, or particularly bad. But you're right, Hill's prose, at least here, is flat. It's almost more infuriating than plain bad prose, because it clearly thinks it's better than it is. I believe that because many people have such low standards for prose in genre writing -- outside of crime fiction, at least, where prose is valued more -- that something that's not embarrassing, that seems to at least be trying, is considered top-shelf. But Hill's prose in his two novels is bland, yet high-toned, almost like a template: use this style to make yourself sound like a real writer!

This stuff's a real grind for me to get through.