I seem to have hit a bit of a dead spot when it comes to the blog lately. The brain, she's just not firing this week. I don't know what it is, but it seems to be infecting quite a number of my fellow bloggers lately (where the shit is Fox??). For a lot of us, I think it has to do with sputtering on fumes after the marathon that was October. That's what's happening to me, anyway. I know I want to write something, but any decent idea I've had would require energy that I simply don't possess at the moment, or I realize, just in the nick of time, that it's not a good idea at all.
.
So what to do? I don't really want to go on hiatus. I'm afraid either I, or whatever readers I may have acquired, won't come back. So hey, how about this: 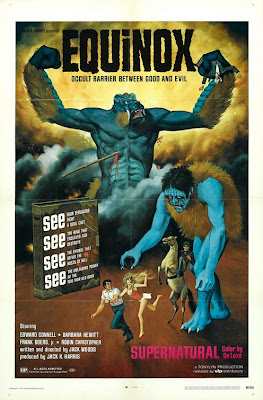 But damn it, I just don't know. Is it worth to get something halfway decent up just to keep a blog's momentum rolling? Probably not. A lot of great bloggers are willing to let their blogs lie fallow until they feel they have something of worth to say, and things often work out for them. I'm perhaps too neurotic for that. In any case, don't expect a new post every couple of days, at least not until the doldrums pass. And when I do post, there will probably be a lot of capsule reviews, though I do have one big post planned this month, for a blogathon.

So, er, anyway. Sorry, I guess. But maybe I'll bust through this tomorrow, and everything will be back to normal by the weekend.

I've always thought capsule reviews were the way to go when you feel like you can't pump out a full post. Nothin' wrong with that. Take a break, man, but continue to leave comments...that way people won't forget about you (not that they would forget about you...) and you can continue in the discussion without having to think up of great posts (I often find that leaving comments helps me come up with ideas). You've done more than enough with in the last three or four months with your impressive look at Inglourious Basterds and your even more impressive horror novel feature.

Oh, and yes, that poster is awesome.

Thank you, Kevin. I just feel like I have a lot on my plate right now, even though compared to a lot of people, I actually don't. Perhaps I'm just lazy. Right now I am, anyway.

Say, when are you coming back to your blog? It was supposed to be soon, I thought.

Yup. I'm done for the term with grad school and today I teach my last class before the kids go on Winter break. I'll probably post something beginning tomorrow or Monday. Now it gets fun because I have a month to do nothing but watch movies. I'll probably start with going to see A Serious Man, then I have A Christmas Tale on Criterion coming via Netflix, then it's time to revisit Public Enemies and Inglourious Basterds. After that it's just me trying to see as many '09 films as I can...which is hard to do in Salem, OR.

See, look at you, with your enthusiasm, and everything. I haven't even been able to get my mind set up to watch any films that have any serious meat on their bones. Or, if I have seen any, I haven't been enthusiastic about writing them up.

Oh well. I look forward to checking out your blog, anyway.

I've been playing Grand Theft Auto IV much more than watching films. So, yeah, I understand the sentiment. Come back whenever you're inspired to write, Bill. Or provide us with a place like this every once in a while to offer random comments. Or, as Kevin suggests, put up capsule reviews: I always love viewing roundups and yours are especially great and fun even though I've almost never seen the actual films you're talking about.

Basically, we'll be here whatever you choose to do.

Thank you, Ed, that's very nice. And you know, I actually thought of doing an "open forum" post, where people could post whatever kind of comment struck their fancy, but I couldn't think of any way to phrase it that wouldn't sound like I was full of myself.

Damn, I thought I was the only one. I've felt filmcrit brain dead all week, maybe because I've had to watch so many movies in prep for my best of the year list. I sat down to write up "Young Victoria" on assignment today and stared at the screen until I felt drool creeping out of my mouth. Hope you're all having a good December.

I agree with Kevin. Go out and read some of your friends' blogs. Read some new blogs. Leave lots of comments, and soon you might be inspired to respond in your own blog about some loony rant you might have read elsewhere.

Adam Zanzie has a doozy of a rant up on Facebook about REDACTED (again) that he tagged you on, Bill. Surely a conservative like yourself can work up the ire to respond to that one (I'm a leftie, and even I think REDACTED has liberal guilt written all over it). ;)

I sat down to write up "Young Victoria" on assignment today and stared at the screen until I felt drool creeping out of my mouth...

Yes. That's how I feel. The fact that nothing I write is on assignment makes it a lot easier to leave my computer and watch CHOPPED, or something.

Tony - I keep thinking about ranting about some of the asinine stuff I've read elsewhere ("elsewhere" very much being a key word here, if you get my meaning), but then I think it's not worth it. What's the point, and so on. I don't know why I think like that, and talk myself out of writing certain things, but I do it a lot.

As for the REDACTED thing, well, I just saw that on Facebook. Ordinarily, I'd be happy to chime in, except I haven't seen the film, so whatever points I'd want to make could only be backed up so far. Add to that the fact that I'd be cool if I never saw REDACTED, and I'm left thinking that I have nothing to bring to that particular table.

So to join the chorus, write whenever.

But I also bring experience with taking off which I was reluctant to do for my first two years and now I'm not. So anyway, as to the experience, last year you may or may not recall I took off from the 23rd through the New Year and it felt great. I just put up the Happy Holidays movie I made (which I'm going to make a tradition) and ignored the blog for a week. The numbers steadily dropped but that's only because many people subscribe or use readers so until they see that a new post has gone up via a reader notification they're not going to stop by. Once I put up a post the numbers went up like 1400 percent.

In other words, Bill, don't worry, the readers will return. Really, just take off.

P.S. Next week I plan on pissing everybody off. Get ready for it.

Thanks, Greg. I know you've taken time off, and I know everybody comes back. I'm just twitchy about it. I shouldn't be, but I am. I'll see how I feel about it tomorrow, or something. I don't know. In the long run, who cares?

The numbers steadily dropped but that's only because many people subscribe or use readers so until they see that a new post has gone up via a reader notification they're not going to stop by. Once I put up a post the numbers went up like 1400 percent...

Well yeah, but you have like four thousand subscribers!! Asshole!

I didn't mean that.

P.S. Next week I plan on pissing everybody off. Get ready for it...

Ooooh! What are you going to write about!! I need to know! E-mail me or something! DO IT DO IT DO IT!!!

I think it's best to surprise you. But actually it won't be much of a surprise probably, considering. So don't guess because you'll probably guess right and then it will be spoiled. I'm going to write it up this weekend.

Also, narrating a "Land Before CGI" post is harder than I thought. Not the narrating part, that's easy, it's the "getting all the fucking footage to match what you're saying" part that's hard like shit. Fuck. I have new found admiration for people who do this stuff regularly.

Oh, damn it...I haven't checked out your post today. I'm sorry, I'll get on that by tomorrow. I want to know what your monkey ass sounds like. No offense.

My post today isn't me narrating a CGI thingy, just a credit sequence. My monkey ass sounds spectacular by the way. I was simply mentioning it because it's taking a lot longer than I thought.