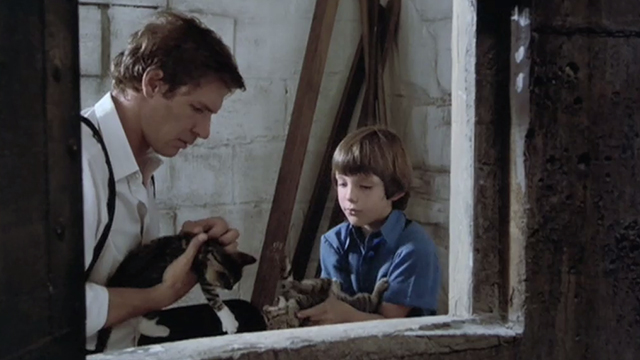 Today for The Bulwark, I wrote about Harrison Ford's best (and maybe one or two less-than-best) non-blockbuster performances. Read it now! It's his birtdhay!
Posted by bill r. at 11:17 AM

So, I read your EXORCIST piece at the Bulwark, and, as a result, watched EXORCIST III again last night. (I hadn't seen it since I saw it in the theaters when it first came out.) I didn't remember much about it, other than being disappointed in it.

Well, after watching it again, I am reminded of why I was - and still am - so disappointed by it. It was, in my view, a middling effort at best - though, yes, head and shoulders above the terrible EXORCIST II.

I find that the power of the original film lies very much in place - as in, this one girl, in one room, is the locus of evil in the world of the characters we meet. Going to that room is like literally jumping into Hell. Many of what I consider the most effective horror films use a sense of place, or calmly advancing evil, to great effect. The steady tread of Michael Myers in HALLOWEEN. Again, the slow-but-unavoidable advance of "it" in IT FOLLOWS. The palpable sense of dread entombed in buildings in THE HAUNTING, or THE LEGEND OF HELL HOUSE. Even the classic movie zombie, slowly shuffling along, embodies this. You can run and run and run, but, in the end you just can't get away from the slowly, steadily advancing danger.

EXORCIST III is a very busy movie, and the jumping around from location to location, to me, undercuts any dread it might generate. It becomes just another jittery murder mystery, but one with a supernatural angle to it. And, though I do love Brad Dourif, I found him to be both miscast and overused here. By this point, he was already well established as being a go-to "crazy actor. Therefore, it is not at all surprising or particularly chilling to see him, you know, ACTING CRAZY. I couldn't help but think that it might have been much more effective to have cast an actor against type for his role. I mean, think about slight, slightly goofy Arnold Stang, say, in that role. He wouldn't have been what you'd expect, and thus might well have been a lot creepier as a confident, creepy killer.

(As an aside, and for context: I consider the work that Jason Miller did in the original film to be some of THE BEST acting EVER captured on film. He was astounding, and extremely believable. But here, I was just kind of embarrassed that he had to be involved in such a shoddy knock-off effort.)

All the lightning bolts and special effects piled on at the end also made me really appreciate how restrained the original was in the use of special effects. It relied on mood and tone to scare - not generic BANG! POW! effects.

On the other hand, I agree with you that the moments of levity in the picture work well, and seem natural, which is a minor miracle given how often such scenes utterly fail in horror movies. However, the shot of the statue of Christ opening its eyes in shock was also very funny - which was not what was intended, I assume. And they showed the shot twice!

Anyway, despite being disappointed all over again, thanks for prodding me to revisit this film. I'm almost always willing to give something a second chance.