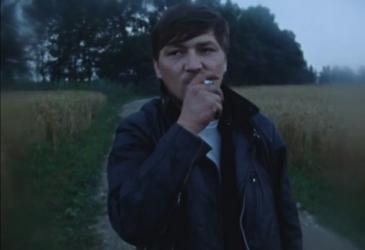 The Middle Eastern god Baal, who I only knew as a vaguely sinister deity when referenced in various works of genre fiction I’ve read over the years, is, I recently learned, primarily a fertility god. And not fundamentally sinister, either, from what I can tell, but anyway, a fertility god who controlled, among other things, rain and dew, which of course are needed for the growth of crops.

Baal, the character portrayed by Rainer Werner Fassbinder in Volker Schlondorff’s 1970 adaptation of Bertolt Brecht’s first play (just released by Criterion), may not be a god of fertility, but he is fertile, bedding various women over the course of the film, and impregnating one of them. And Baal the film is curiously wet – not only is Vaseline (apparently, anyway) coating the rim of Schlondorff’s camera lens, but the Germany through which these characters stumble and drink and fight seems to perpetually drenched by a thin, depressing autumn drizzle.

However, there’s another Baal, spawned (if you will) from the fertility god, but now a prince of Hell, according to some occult literature. As Baal, the abusive, drunken, hateful, and prolific poet in Schlondorff’s film, a misanthropic asshole who blurts his poems between strippers at a seedy nightclub, Fassbinder does seem powerful, able to control the pathetic group of people who are sucked into his orbit inside one of those strange European bars that’s all blank walls and giant tables of unvarnished wood. This might be the Hell of which he is a prince. He does rule here, and takes what he wants, especially from the two women played by Irmgard Paulis and Margarethe von Trotta, both of whom are discarded, one of whom, because she fell under Baal’s spell, is doomed. Though in fairness, both may be doomed.

Like all gods – and maybe that’s what Brecht/Schlondorff/Fassbinder’s Baal is, after all – this Baal tells his own story. The film begins with Fassbinder walking down a path through a field, while Klaus Doldinger’s quite frankly nuts pop/jazz(?) score plays underneath a voice telling the story of Baal. The story is bleak and abstract, the imagery wild and violent, the voice sounding warped, too high somehow. It reminded me of David Bennent’s voice in Schlondorff’s The Tin Drum when Oskar shrieks “The gasman!!!”, if that voice achieved the same effect while somehow remaining calm. But later in the film, we see Baal reciting his own poetry, and that’s when I realized that the voice heard at the beginning of the film, as a sort of narration – and many more times throughout the course of Baal, always accompanied by Doldinger’s music – was in fact Fassbinder’s own. I’m not sure why it took so long for this to hit me, but the slightly disorienting effect this all had on me seems to me to be right in line with everything else in the film.

Baal is shot in a style that seems to want to evoke both gutter realism and stagey artificiality (at one point, during a scene featuring Baal among a group of lumberjacks, I honestly thought for a second Baal was going to turn into a musical). A handheld camera tilts up to look at birds overhead, as anyone walking through a field might do, but that Vaseline on the lens reminds us there is a lens. Fassbinder’s performance is skeevily naturalistic, while Sigie Graue (as Ekart, one of Baal’s circle who will eventually crack under the pressure of Baal’s unending shittiness) seems to have wandered over from a Bresson film. All of this is one way, I suppose, of tackling Brecht on film.

In addition to that gutter realism and stagey artificiality, Baal also emanates apocalyptic mysticism. That Vaseline does the additional work of evoking fantasy, or dreams, or a step from The Real World into that of A Story Being Told, Baal tells the story of Baal, he looks down on his creation. He is God and he is Man. The end of the film takes place in the woods, with our omniscient narrator/poet/deity watching himself die. It’s not a quiet death, but a spasmodic one, and it is directly preceded by a group of men making it very clear that they do not care. As Baal walks us through his death, his tone, and his words, suggest that neither does he.

The other day, after I finished watching Baal, I didn’t think I liked it very much. I’ve thought about it a lot since then.

I wish they had included Alan Clarke's BAAL, starring David Bowie. Bowie was damn near born to play the character, and does a great job of conveying how young Baal can be sensitive, compelling, charismatic, and a total piece of shit, while also showing in later scenes how his charm curdles with age.