Hi. I don't know what I'm doing with this blog anymore, but if I'm going to request screeners, and if I'm going to accept those screeners into my home, I should probably try to earn them. Here are reviews of five of them! 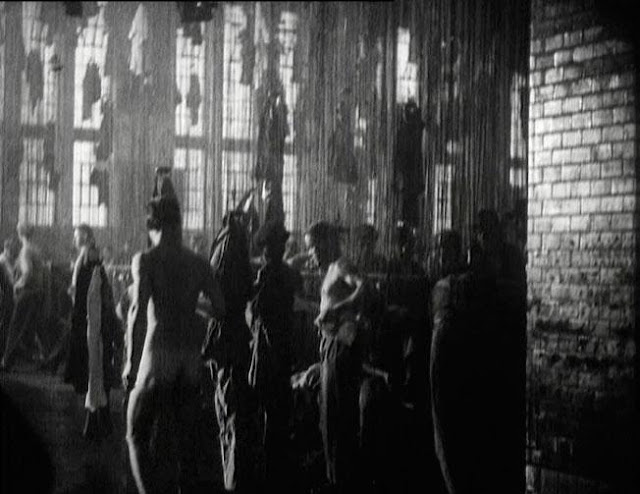 Kameradschaft (d. G.W. Pabst) – From best to worst, is the order I have chosen. This 1931 film, released this week by Criterion, takes a true story about a coal mine collapse that trapped a crew of French miners that occurred in 1906 and transplants it to the then-current day. There’s a great power to this idea, because the miners who survived were rescued by their German peers, thereby turning the story from one of mere heroism to a moving plea for healing between countries. Of course, given what the 1930s had in store for France, Germany, and the world, Pabst’s film is unfortunately imbued now with a deep, bittersweet melancholy. At least the possibility for something different was there.
As for the film itself, I should say, first of all, that the restoration is beautiful. There’s a brief section late in the film that is missing; this is certainly not uncommon with films this old, but I don’t think I’ve ever seen a lost piece of a movie surrounded by images this impeccable. And of course, it’s a great looking film – check out the scene shortly after the mine explosion, when news of it has made its way to the German miners across the border. The miners are in a massive shower room, their clothes hung above them on wires, their bodies pitch black with coal dust. It looks like some infernal gymnasium, but this is where the plan to save the French miners, with whom the Germans have a somewhat fraught relationship, is hatched. Or the explosion that leads to the collapse, and the very real fire that crawls along the mineshaft ceiling. Films in the 1930s used music far more sparingly, if at all, and its absence here lends that fire a deadly eeriness.
Otherwise, Pabst is surprisingly languid – which isn’t to say dull – in his telling of this story about disaster and rescue. Once the roof has fallen down around everyone’s head, Pabst refuses to panic. Kameradschaft moves purposefully through its scenes of planning and salvation, as determined but casually professional as the Germans lowering themselves down into danger. 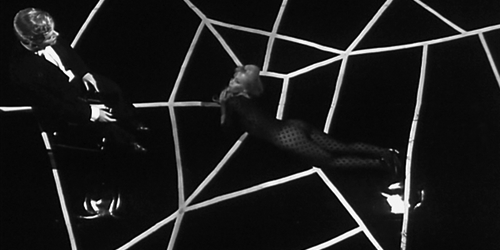 The Diabolical Dr. Z (d. Jess Franco) – Somewhat less languid than Kameradschaft is this one, freshly released by Kino Lorber. This 1966 film is part of what as far as I know might well be known as Franco’s Orloff Cycle, though Orloff – played in previous and subsequent films by Howard Vernon – doesn’t appear. He is, instead, mentioned, with a mournful tone, by Dr. Zimmern, who allows that Orloff had his faults, but insists that his work in the field brain surgery experimentation has paved the way to a real breakthrough in the battle to defeat evil. With brain surgery. Before Dr. Zimmern can fulfill his own goals in this realm, after bringing all this up at a medical conference he is, essentially, booed to death. Then his daughter Irma (Mabel Karr), who is somewhat less stable than her dad, decides to use what her father taught her to create murderers out of otherwise more or less reasonable humans so that she can get revenge on the doctors (one of whom is played by Howard Vernon, because why not) who booed him (to death).


There are those who insist that Jess Franco was a great filmmaker, in roughly the same league as Mario Bava and Jean Rollin. Though my early, quite bad, experiences with relatively late-in-his-career Franco have been trumped by my eventual enjoyment of his early thrillers, like this one, I still can’t find anything in his work that deserves that kind of praise. He doesn’t have the visual imagination, either in terms of pure cinema or insane macabre nightmare design, of those guys. He does, though, sometimes get to Rollin’s dreamy eroticism, and Bava’s Gothic starkness. I’d say The Diabolical Dr. Z is fair-to-middlin’ Franco. If he’s your kind of guy already, you’ll have already picked this up anyway. 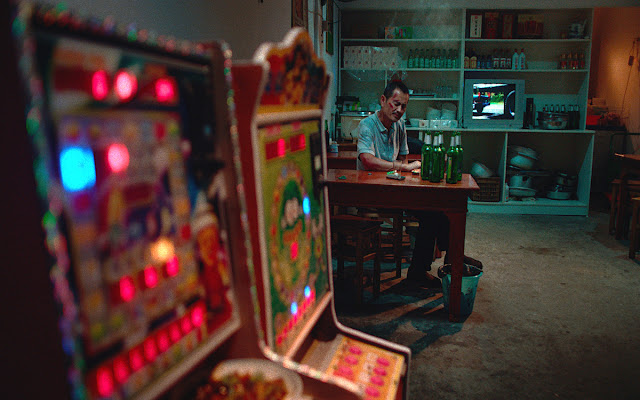 Old Stone (d. Johnny Ma) – Also this week, Kino Lorber and Zeitgeist films released to home video this 2016 socially-minded thriller, the debut feature from Chinese director Johnny Ma. It stars Chen Gang, who’s excellent, as Lao Shi, a cab driver who gets into an accident caused by his drunken passenger, severely injuring a bicyclist. Finding himself waiting for an ambulance or police who aren’t coming, Lao Shi has to decide to take the injured man to the hospital himself or watch him die in the street. He chooses to take him to the hospital, which, due to some ludicrous Chinese law or other, somehow makes him responsible for the man’s medical bills, barring someone else stepping in to take responsibility. Which, needless to say, no one does. And as the man is in a coma, his medical bills soon begin to crush Lao Shin and his family.
I must say that taking this infuriating situation as the subject of a thriller, rather than a social drama, is a pretty slick idea, even if Ma does play it as a social drama for much of Old Stone’s brief run time. As the bills steadily mount and no one takes the burden from Lao Shin’s shoulders, in what way precisely this is going to turn into a thriller becomes nauseatingly clear. There is great power in that, though reaching that moment is not always engaging. The viewer knows Lao Shin isn’t going to be saved, and watching him continue to not be saved for an hour, without much variety in the scenes, can only grip so hard. But Old Stone does finally deliver the gut punch its set up promises, and what disturbs the most is the complete understanding one has of how it could have come to this. 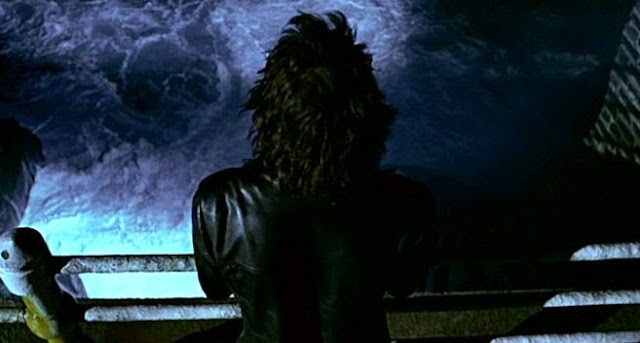 Vacas and The Red Squirrel (d. Julio Medem) – And so it’s come to this. Listen, I had no axe to grind going into these, Medem’s first two features, which have just been released by Olive Films. All I knew about the guy prior to watching these was that he’d directed Sex and Lucia, thereby springing Paz Vega onto the wider world. So I had nothing but positive feelings, indirect and vague as they may have been, about the man. But I have to tell you that, speaking as a lover of film whose relationship with the artform has become a bit combative, Vacas and The Red Squirrel just about broke me.


In both films, Medem employs a kind of bright, consciously and colorfully melodramatic style that put me in mind of Leos Carax, if Carax had no control over his own technique, or taste. This came through especially in The Red Squirrel, Medem’s second film, which finds him asking “What if Carax wondered what it would be like if Hitchcock remade Overboard?” A woman (Emma Suarez, who’s also in Vacas) gets into a motorcycle accident on the very same bridge from which a man (Nancho Novo) was just about to suicidally heave himself. Snapped out of it by the plight of this, so it turns out, beautiful woman, the man follows her to the hospital where he learns she’s lost her memory. So because he’s sad and she’s pretty, he convinces her that they’re married, and then they go camping.
Medem is, I suppose, a little bit more aware of the ethical diciness, to put it mildly, inherent in what this guy’s doing than the makers of the Kurt Russell/Goldie Hawn comedy appeared to be, but only just. The whole thing is still finally looked upon as sweet, and between the beginning of their camping trip (at a campground full of other characters and such) and the part where her psychotic ex shows up to commit violence, etc., The Red Squirrel meanders thoughtlessly, with bizarrely misjudged sexuality (Suarez’s teasing relationship with a young boy, for instance; but hey, Europeans, right?) and bad shot choices that seem to exist only because Medem incorrectly believed they would be cool, or because on that day he was bored – see the sudden, worthless cut to an overhead shot of Suarez telling a story to their camping neighbors over dinner. And then the ending is just nonsense, full of the kind of willed strangeness that young filmmakers believe equal a unique artistic stamp.
Vacas is, I guess, a bit better. It shouldn’t be, since Medem made it first, it’s full of that same willed strangeness to which I just referred. And it’s also somehow superhumanly unengaging after the first ten or fifteen minutes. But the film, which is generally about two rural Spanish families who don’t like each other in the years leading up to the Spanish Civil War, does seem, I suppose, a bit more fully imagined. It swings at a lot, but less wildly than The Red Squirrel, and it does have its moments here and there. A cow’s death late in the film, for example, and early on a log-chopping contest between two men. Then again, twice in Vacas Medem shows that he very specifically does not have a way with battle scenes.  In these scenes, he seems to have deliberately chosen to not tackle the challenge such a complicated sequence presents, and the results are as perfunctory as you might imagine. For such an overheated film, Vacas becomes tepid just when it should be boiling over.
So I’m not a Medem fan, I’m afraid, and I can’t imagine a world in which I suddenly become one.
Posted by bill r. at 8:45 PM